I’m proud of the way this turned out, I guess half because I don’t usually make 3D objects, and half because it came out cool (in my opinion, anyway). I bought a stand for my regular monitor a while ago, and it wasn’t until yesterday when I made more room on my desk for my second monitor, that I realized how convenient having a monitor raised is. So I made my design, cut it out of some birch ply, and here we have it: 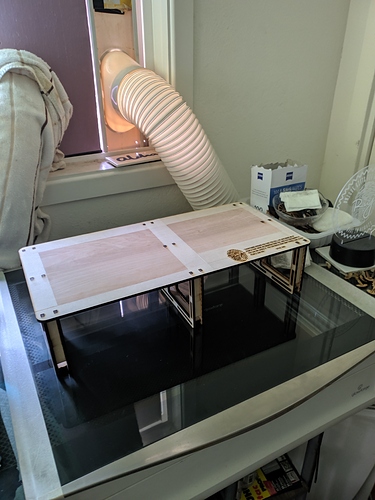 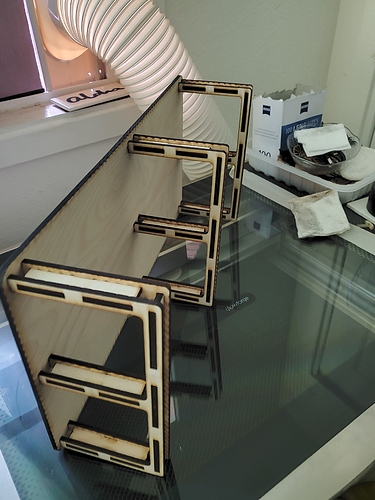 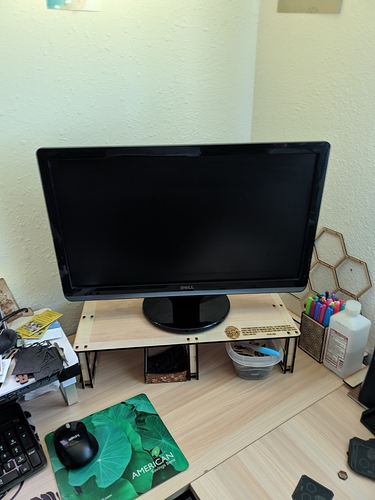 I considered making the top hollow and putting electronics like a USB hub and maybe lighting in it, but meh, the other stand has a hub, and I could always make this again later since I didn’t glue the top down.

Since I know at least a couple of you will be curious what it says, I took a shot of that. I think this quote really vibes with the reason I started making things, and I bet a few of you can agree with it. 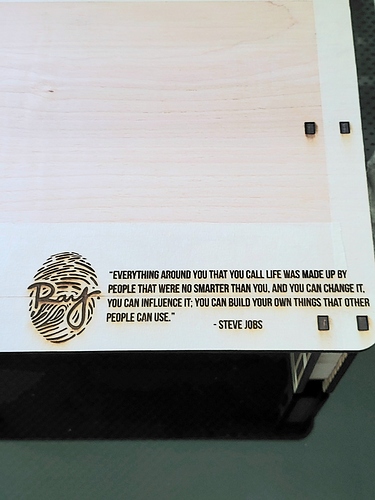 Oh, and I know I never took the masking off, but that’s because I kind of like the look of it

EDIT: Uploaded the files for anyone interested in making one for yourself! Monitor Stand

Very nicely done! And I like the way it looks, too…

Very cool design! I keep threatening to make a new computer setup but then I would have to cleanup this one, Inkscape and Gimp really do work better with the extra real estate as not only can you act there but just reading there makes both a lot easier.

I have an L shaped desk, and on one side I had a large photo printer, and then my monitor on the shorter end with a couple of sterilite cubby things for convenience, and then of course the junk that sits between. I’ve been really wanting to use my second monitor to be able to watch stuff while I design projects, so I finally got my act together, got some more wire shelving and now I’ve got more space for my materials (which we’re leaning against the wall) and was able to move the printer onto there. I’m considering sharing the file once I clean a couple of things up, so maybe you’ll have less excuses to make one then

Nice job on that! It looks really sturdy and it’s cool that you customized it with that quote.

on one side I had a large photo printer

My printer is networked so I set it up in a closet way out of my way. I don’t print daily so I definitely didn’t need it on my desk.

I’ll never go back, printers are way too bulky for my desk space.

Very nice - especially since you said you don’t do 3-d that often! I love a practical customized project.

My printer is networked so I set it up in a closet way out of my way.

I would do this, but there’s also not space in the closet because the other materials rack and the of course, massive Glowforge box

the of course, massive Glowforge box

With the Glowforge box put together backwards there are foam bits etc but the rest is a place to have a bunch of shelves to store the wood.

Oh yeah - so much better than the foam packing material (from the monitor!) I’m currently using as a monitor stand…

how did you do that thumb print? Make one and then blow it up?

I drew one in Adobe Draw on my iPad, then took it into Illustrator and cleaned up the lines until I liked it. It’s been through a few iterations, but I think I’ve come to a good place to be done with it!

So yeah, I made one then blew it up, but that’s the most simple way to explain it. You can export from Adobe Draw straight into Illustrator, which is handy, and since it’s vectorized, after cleaning up the line work (merging each stroke, since AD keeps the strokes separate) and tweaking the sizing, I just locked the ratio in, so now I can make it as small, or as big, as I would ever like to

So is it a legit print? Or you created it? I only ask because I have my Fathers fingerprints and handprints and that is something I have wanted to play with;)

I posted about it a while ago, here: New Year, New Me

I designed it for my business logo, and originally it was a real print, but real prints are messy and inconsistent, so I drew one from scratch.

Also, generally, you don’t want to use a real print since it is a security issue - the likelihood that it would be an issue is tiny, but why take the risk

Also, generally, you don’t want to use a real print since it is a security issue

Yes! My original idea was using my own, but that changed real quick after I unlocked my phone and it clicked in my head what all we do with fingerprints these days.