Fresh out of the box. First test print. Nothing but cooling errors.

If the GlowForge can’t operate in ambient temperatures above 75 degrees, it’s useless. In So Cal, it’s rarely below 75 which means this thing will work like maybe 2.5 weeks out of the year.

So far, not a fan. Literally and figuratively.

Unfortunately that’s right on the bubble. I’m sure you’ve searched for cooling posts? There have been some clever solutions.

Mine was to buy a window ac unit for my workspace, but that’s one of the more expensive ways to do it. Someone last week had success with a bucket of ice, literally.

The most elegant inexpensive solution I’ve seen has been an ice chest and a small radiator for cooling PCs.

Homemade Cooling System Beyond the Manual

I finally got my cooling system up and running and it works great. It was 82 with the humidity in the room and with this running i got the GF well within the operating temp. I used a 240 mm radiator with 2 120 mm fans operated by a separate switch so I can control the speed. The cooling is done with a tub of water cooled down with ice from the fridge being pumped with a small fish tank pump. While the water will eventually warm up to room temp, i have a thermometer in the water to monitor the t…

Assuming it’s been in the back of a delivery truck all day?

No mention of what model you purchased but the operating windows are listed on the Specs page. 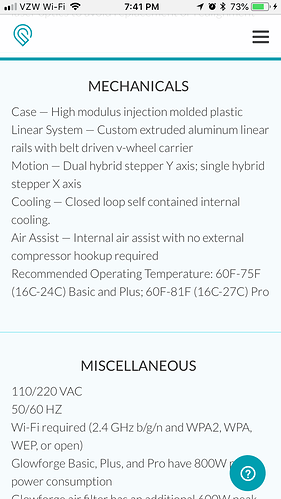 Actually, sat inside air conditioned house for 24 hours before unpacking and setting up.

I got the Plus. Thanks

I genuinely appreciate the ingenuity of the maker community - it’s part of why I bought a GF - but it bothers me that people are essentially having to retrofit external cooling systems to GF’s fancy “closed-loop cooling system”. It seems to me that it’s a major flaw in design if it doesn’t work all that great to begin with.

I got the GF to replace a cheap $300 40W Chinese laser cutter that was a workhorse. Yes, the cooling tank was external and not a “closed-loop”, but the machine operated reliably in any temperature for years. And really, the footprint of the GF isn’t that much smaller for it’s closed loop system.

Honestly, if GF support doesn’t have a reasonable solution, I can very easily see this thing making a return trip to Seattle - but hey, it’s colder there, so I guess it will finally work.

I’m not sure where it’s their responsibility, so long as it operates within the specs they detailed.

It’s a passive cooling system in the basic and plus. Kinda is what it is. It’s one of the compromises that’s made in an all-in-one system.

Given your operating environment, a pro might be a better choice since it uses active cooling. Not sure on the return policy - maybe if you bought on Amazon. Otherwise, I believe it’s pretty explicitly stated in the terms of purchase that sales are final and once it has been delivered, that’s it.

I hear you, that’s tough. Unfortunately if your work area is too hot and you have no way to locally cool it, it is going to be a tough summer.

There are people successfully using it in really hot locations, domestically like Arizona and Hawaii, internationally in the Caribbean and equatorial regions.

It’s definitely possible but it will probably require adapting the work area to match their stats.

HOWEVER… if you do work it out, this forum is kind of great. We’d hate for you go before you even got off the ground, I’d love to see what you’d create. I hope you can wrangle a solution.

Appreciate that. I’ve been quite involved in other maker communities like Thingiverse and most recently with Mayku. Moreover, I probably have hundreds, if not thousands of laser cut designs I’ve made over the years and was hoping to share them here (another reason I purchased the GF). Hopefully it will come to that, but I am not encouraged by this inauspicious start.

Maybe if you describe your workspace (or pics! We love workspace pics) someone might have a similar situation and have worked out something sneaky?

There are lots of people here in the same boat, finding lots of great workarounds to let them keep making beautiful things. I’ve only ever had this one laser, but my understanding is the operating temp limits are pretty ubiquitous.

I’ve had to deal with the issue myself, since houses here in the PNW don’t have A/C by default, and our summer temps have continued rising over recent years, but thankfully it hasn’t shut me down completely, so far. If it does, I’ll build a cooler, because this is a danged fine machine and I don’t know how I could ever live without it.

Welcome, give it a chance and I think you’ll fall in love just like we have. We’ll be here to cheer you on and help you through the hard parts!

Dangit! You just sent me down a rabbit hole. I’d never heard of Mayku but it looks really cool.

I do hope you are able to work things out!

Thanks. Coming off a MUCH cheaper laser cutter that was the same wattage, this issue really blindsided me. For the price of this machine, I really wasn’t expecting to have to rig something just to get it to work out of the box. I passed on getting a 100w laser for the GF which I thought had better tech. Clearly the closed cooling system is a design flaw if so many people are having an issue with it.

I don’t see it as a flaw, just as something they chose not to include. If the temp specs don’t fit your environment, you have to add cooling.

Also, the machine doesn’t cut off at those temps because it can’t run; it cuts off because of built in safeguards, because operating at those temps would shorten its lifespan. So when I hear people say their cheaper laser could operate at those ranges, all that tells me is they had a lower-quality machine without the built-in safeguards to keep it in good running condition.

Go through the forums, lots of solutions here including mine. I got a floor unit and run the waste heat hose out the same place as the

I hope you’re able to work it out.

FWIW, the closed system is actually a selling point for me. I did a lot of research on all the options before buying (including spending the past 4 months using a GF at the local makerspace) and I didn’t want to deal with buckets of water. That said, I live in MA, where it’s cooler than 75 a good chunk of the year and I have central AC. The 75 degree limit won’t be an issue.

It should be noted that the GF cooling pauses are meant to prolong the life of the tube. Not having the safeguard means you’re able to laser, but potentially costing yourself more in the long run. It’s true that the workarounds are janky, especially if you don’t really need AC, but I think it’s worth it. It’s a fun machine and quite user friendly.

There’s a lot to consider here. No one will deny compromises had to be made for the form factor.

Another consideration, beyond tube life and power fall off at higher temps, are the Proofgrade settings and a lot of what GF uses for selling points in the material line; that it just works. Once you hit those temps where power drops rapidly, the Proofgrade settings go out the window. That may not mean anything to a lot of people; but, it does mean something to a lot of people.

Yes. I fully understand that it’s a software safeguard protecting the machine - perhaps too aggressively, I don’t know.

I disagree with your other point, however. The cheaper laser I had (have) isn’t being replaced because it lacked safeguards to keep it in good running condition, but because it was such a workhorse that it’s time to replace the mirrors and the laser cathode which naturally wear out over time. In this case, they lasted over 4 years with very little maintenance - well past their expected life span. To replace them, it would cost about $300, which is about the cost of a new machine.

Rather than replace these consumables, I thought I might move on to a device that offered a more plug and play experience (the cheaper machines do require that you’re a bit more hands-on when setting up your cuts). From what I can see, the GF does provide that, but compared to the less expensive machines, the closed-loop system is absolutely a flaw if I am forced to retrofit some device that circumvents that system. The cheaper machines simply run water directly through the cathode using a small pump. It’s actually not too dissimilar to the fan/radiator system solution that was posted here. And because they do this, they aren’t as sensitive to ambient heat.

So in either set-up, I’m expected to have some external cooling device to keep the machine running. The difference is that the cheaper machines are designed to account for this - it’s built into their architecture so that the machine CAN safely operate. The GF seems to put the onus on their consumers to figure it out. In my book (and as the owner of a company that specializes in usability design), that is 100% design flaw.