Awesome! Glad I was in the right ballpark. Let me know how it goes… like I said I only tried it out with paper…

It might be cool to build out a suite of parametric tools for making miniature houses.

the size of the overhang would probably be the only thing I could think of I am playing with it now and what you made is EXACTLY what I have been looking everywhere to get again I cant thank you enough.

edit: as is is amazing as is I’m not telling you to do anything feel like a cheep skate

is what your using home designer studio or is it home designer suite? and how are you getting the finished product from the program view out to a usable broken apart either view or whatever? Or are you just using it to create the project and then recreating it in inscape or some other program?

I’m trying to make Cuttle into a successful webapp — I’d like it to become the go-to tool for cut design, instead of e.g. Illustrator. So figuring out applications where simple parametric design is useful is really good learning for me! I’m happy to keep iterating on this roof application

For roof overhang, the only change is that the roof pieces would be slightly larger, like this? 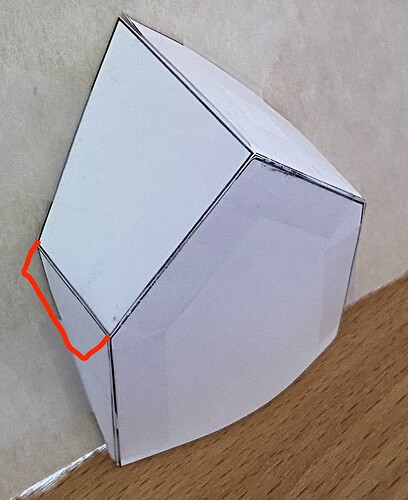 Also I’m curious about how the roof pieces meet at the peak. Do you usually make one of the roof pieces slightly longer (that is, its normal length plus the material thickness) so that the shorter piece butts into the longer piece? Like this: 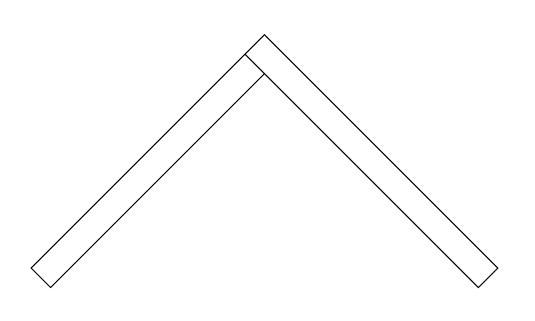 Or is it preferable to do some other kind of joint for the peak?

is what your using home designer studio

I’m using an old (2015) version o Home Designer Suite. To get a flat model, you go to the File menu, select Print…, and choose Print Model. You get a dialog popup that allows you to choose a bunch of things including scale, etc. For instance, I chose 1/4" = 4’. Then it prepares a pdf file that you can open in Illustrator or Inkscape to pull out the walls and roofs. It’s not perfect, but gives you a starting point. Here’s an example of the walls printout:

This house is not a perfect rectangle, it’s split level, so the floor plan looks kinda weird.

The ‘angle’ of a roof is called the slope or pitch, most traditional drawings and measurement tools will use this term and expect to receive input in a ratio between the amount of rise vs. run.

A handy calculator for determining the angle, as well as the components necessary for constructing a roof is Omni Calculator

yes on both of them would be a slight over hang in the front as well but that can be accomplished when putting it together by just moving the front piece back slightly.

the box of the house can be made in one of the box-o-matic programs [besides the peaks of the roof] i’m playing with this really simple program thats called dreamplan home design i found for free thats great for making everything my issue im trying to work out is how to get it from there to some usable format. for the house walls and such I figured id just draw that out shouldn’t be to hard.

Yeah it would be cool if you could draw the plan and then it could generate all the wall and roof pieces! It could work like @jestelle’s drawer dividers generator.

Dividers Generator via Cuttle Everything Else

Hi all! I recently wanted to quickly create drawer/box dividers for organization or as a structural support: In search of: complex drawer divider generator This gave me a chance to dive deep into cuttle.xyz, a amazing design tool @tobyschachman has been working on and shared some similar work on here: Succulent Coasters The result is a pretty sweet generator for these kinds of dividers: Cuttle - Dividers Generator You can see it in action, and see a tutorial here: But in short…

Next time I take a look at this (tomorrow?) I’ll add support for an overhang (on the sides and the front) and will parameterize it based on pitch instead of angle as @yoyodyne2112 suggests.

One question: do you generally glue these pieces together or use finger joints? Your box-o-matic mention makes me think finger joints but it looks like @timmystreehouse’s designs (which are awesome!) just have faces glued together…

I’m absolutely no expert at all but when I made a little house, I made it just like your drawing. It was easy to glue together that way.

Glue but Box-o-matic has the no finger option.

Of note also Glowforge has an Amazon Box setting (might be in premium?) that you can experiment widely. 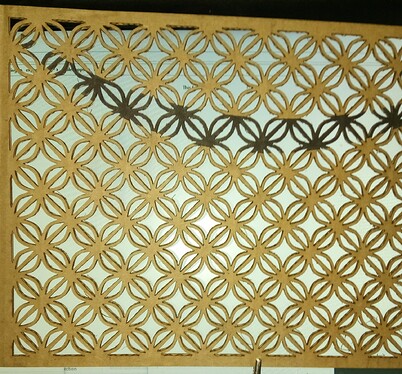 downloaded the software “new version” but trial very easy to use love it just as easy as the one I was messing with but more detail and options.

I’m not seeing the print model. Granted this is the trial and alot of the print and export functions are unavailable but they are grayed out not missing and the print model is something I’m not finding at all. I’ll keep messing with it cause i like it maybe its somewhere besides the print under the file tab. apparently cant get the older version that I can see anyway so dont loose yours if you decided to upgrade lol

Thanks for the data point @trually!

@timmystreehouse, just to confirm, when you have panels meeting at 90° do you also extend one of them out by the material thickness, like this?

Is this what you mean when you wrote,

I cut ALL my models (with the laser) out of card-stock before using more expensive materials - especially roofs. You have to adjust for material thickness but at least that’s a “known” number.

Are there other places you need to take material thickness into account in this process? Thanks!

I didn’t realize this!! Thanks!

Gonna check it out later

Yes, when I need to I will make one side longer by the thickness of the material like that. If possible I prefer to cut them at the same size and bevel the “inside” edges - not always a practical option with such tiny pieces though.

The card-stock was just a “trick” I learned after wasting too much wood (and not being good at math, lol). BUT, I still use card-stock for almost all my roofs. I just Kiss Cut (cut 50-80% through the material) . That way both sides are the same length, it comes out it one piece, and I don’t have to bevel the inside. 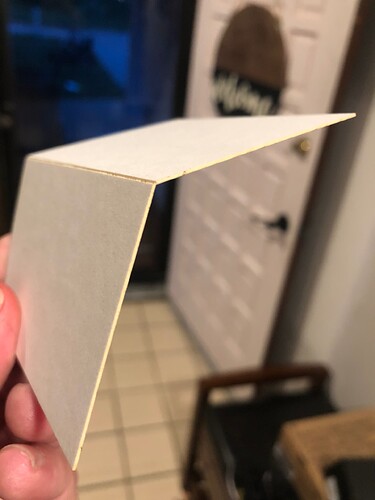 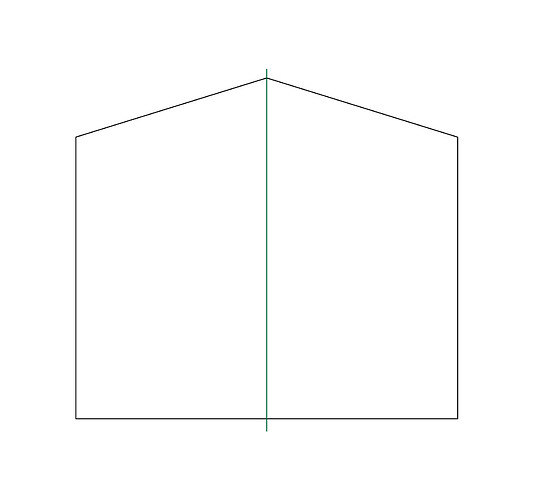 I think it was mentioned before but the only other thickness consideration to take into account would be the “overhangs”. Personally though I think that would be up to the modeler as each project would call for different standard. Just my opinion.

Your .SVG generator is AMAZING!!! I have also been looking for a simple solution for these angles with zero success. In that quest I have posed multiple requests on different modeling, woodworking, and contractor sites/groups. I have received literally 100’s of responses and multiple links to “roofing” calculator sites and NONE of them have come close to a solution as GREAT as yours!!! Seriously, BROVO times ten!!!

Is it okay with you if I share the link with other modelers? Based on my research, yours is the BEST!!!

Can you explain a little bit more about how you do the beveling with wood? I am not quite understanding.

Pretty much just cut a 45º angle down the length of the piece. 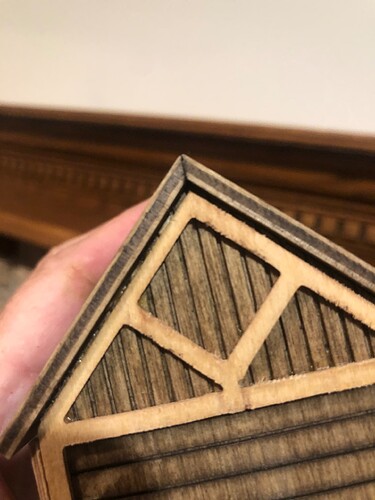 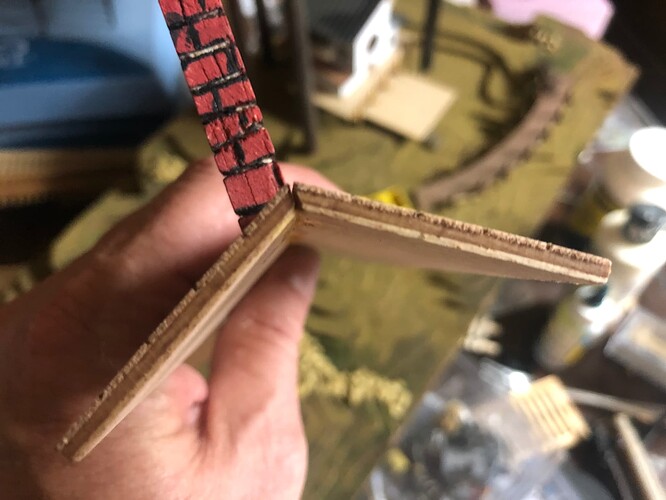 Both of those I made with a CNC router so the bevel was easy to add. The problem with the CNC router is that my pieces are so small everything gets kicked around on the table. Plus I had to spend a lot of time sanding down the pieces.

Problem with the laser is I can’t (simply) cut at an angle. So I sometimes bevel them on a table router. But as you can see in this photo the bit has to be so low that accuracy is difficult at best. I don’t know if you can even see the bit cus its so low but it’s that little blue thing in there. 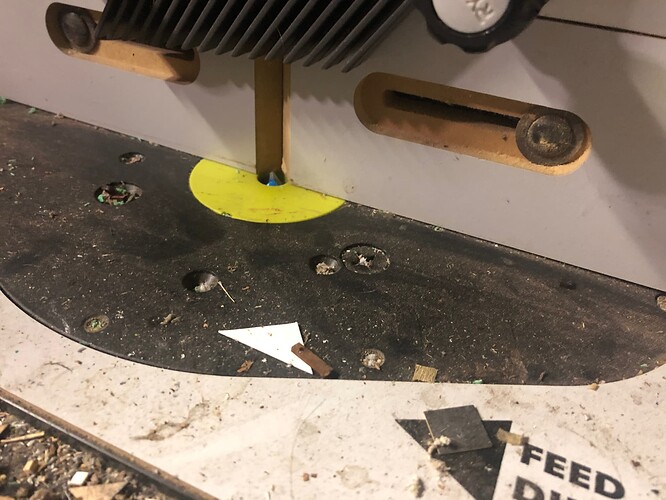 I’ve tried to make little 45º degree sanding jigs and have even considered buying a mini table saw to achieve this cut. But I couldn’t figure out the jig and the saw is like $400.

The walls is really what I want to be able to master this technique for. I hate seeing this… 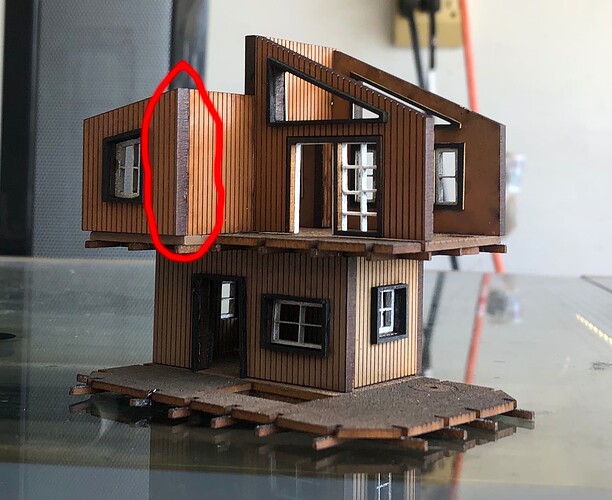 The pieces on this barn were big enough to get a bevel on the inside with the router table. I think it looks soooo much better. 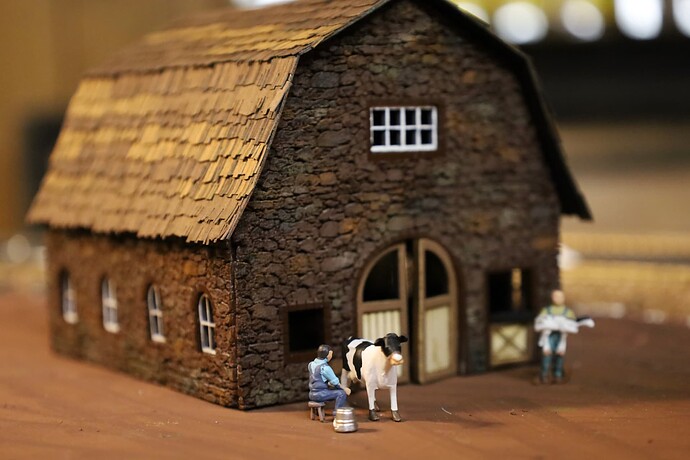 If anyone has any ideas how to get a beveled edge on tiny pieces I’d love to know.

A “beyond the manual” add on…

A “beyond the manual” add on…

hasn’t anyone heard of a file or sanding board anymore? Way back when I was making architectural models from foamcore I would make two cuts with a scalpel., one barely through the foam and the other scoring the backside of the paper. Then it would fold on the scored line and make a nice 90degree angle without showing a cut line. It worked so well the owner fired me as he could now do the work fast enough that he no longer needed my help.

In theory, one could do that with a softer wood (like basswood) one side almost cut through, and the other scored and a razor popping off the angle

Ohh I understand. I don’t have a cnc (and no room for one unfortunately, I’d love one lol).
The best I could probably do would be to add a little strip to cover the end.