Derail every time right out of the box

I just received my Glowforge and it is right out of the gate not working. I go to turn it on the rail moves forward then after 30 seconds or so it tries to move back and the right side moves but the left refuses so it derails ( this has happened 3 times in a row from me just turning the machine on fixing the position then turning it on again).

Not sure what you have done already, but just in case:
With the machine OFF, manually and gently move the rail all the way back, and make sure it moves freely. You will feel a little resistance from the motors, but it should move from front to back easily. Then manually move the head left and right… same thing… it should move freely.
After you’ve done this to verify everything moves correctly (front-back-left-right), push it all the way back, and the move the print head all the way to the RIGHT. then close the lid and turn on the machine. It should then realign itself and calibrate, then “park” itself to the LEFT and BACK of the machine.

I have tried that 3 or 4 times and each time when I move it myself it moves nicely but when it tries calibrating itself on startup it screws up. I even removed the crumb tray incase I did not have it fitting in the right spot.

Well, crud… Perhaps someone else will chime in and suggest something else.
The Glowforge community here is awesome. In the meantime, I guess you need to submit a ticket via email.
Good luck. I hope it is something simple, so you get cutting!

it would seem that there is something on the rails that is halting movement or something like a loose wire is looping down and getting in the way.

could even be a loose screw that came out in shipping. something odd like that.

since you do say it is sliding back and forth ok. try to center the head under the lid camera and then power it up.

i would look for a wire that is hanging down on the left side some place. my best guess.

There have been a few instances of that, and it proved to be a wire catching if I recall.
With the power off, open the front door and remove the crumb tray to get a better view. With a flashlight look at both ends of the tube as you move the gantry forward and back, see if you can spot a wire snagging something.

I can not see any wires that it could be catching on on either side. 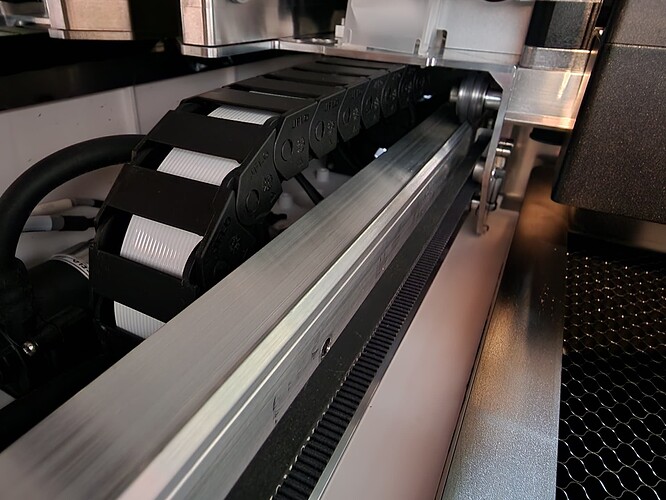 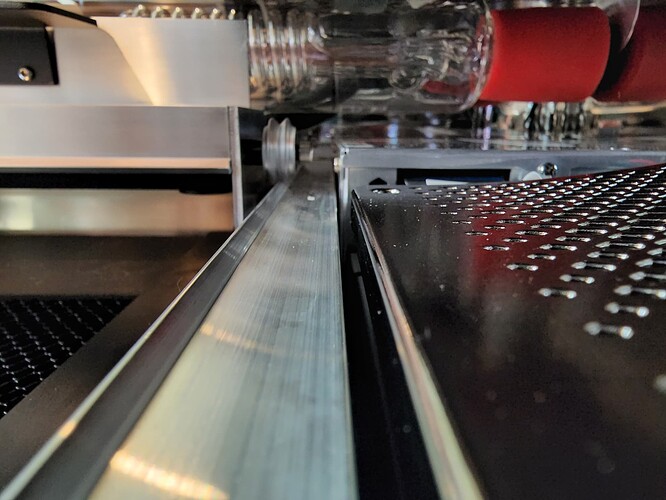 Can you post a short video from your phone of what it is doing? It may help others help troubleshoot.

Looks like the left side is snagged on something so it can’t move towards the back of the machine along with the right side. Maybe you can leave it right there where it gets stuck, stick a cell phone in behind the tube pointing to the left, and see if there’s a wire or something coming off the glass laser tube snagged on something? Looking over in this circled area basically.

That is definitely weird.
Since cosmickaori says it move easily by hand, I wonder if it is the stepper motor not engaging, or the pully or belt on that side is slipping or something.
If it was snagging, I would think it would snag when it is moved manually, which doesn’t seem to be the case here.
My guess is that it’s the stepper motor, or the pully on that motor or the belt itself sticking (or very loose). I am not sure how exactly the left side Y-axis movement is all configured. I am not at my machine to look.

I got it to do calibration and have only be off a little bit (not completely derail) but then if I tell it to set focus after straightening it out a tad the right side wants to move forward but the left side still lags behind. Here is a picture of the left side while it is a bit off. 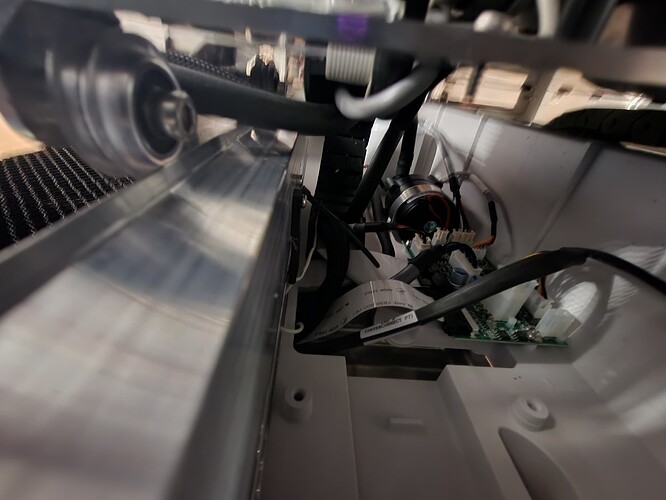 I received an e-mail from Glowforge and in checking the wheels the left one seems to not want to slide properly sometimes. That might be the cause!

so the wheel is “sticking”? That pretty much the problem?

did the wheels solve your issue? Im having the same exact issue right out the box.

Send a ticket to glowforge, they replaced mine after i sent them a video of what happened.