I’d definitely check the tension on the belt under the laser arm.

Nothing seems out of place, the belt feels very taught and seated between the ridges of the spools. I’m going to try a different test file with more continuous fill, see how it does

Starting with the third pass, it’s doing it again <>

Hmmmm…that’s very odd. Try standing over the machine while it’s running one, watch it closely, and see if you can spot where it happens…that will give you an idea of where to look. It sounds mechanical, but the only other thing i can think of besides a loose belt underneath the gantry is the possibility that a screw at the right side of the laser arm has gotten loose and the head is hitting it and bouncing.

Check to make sure there’s no debris hiding in there…along the path of the head when it travels, or that the white cable isn’t hanging up on one of those screws. (Turn it off and gently move the head back and forth by hand.)

I checked the ribbon/screws, no contact moving it by hand with the power off. No sign that the screw on the right end of the arm is making contact either.

Another print I had two elements: one @ 2000 speed, second at 3000. The 2000 printed without a hitch (I only let it run a few minutes). The 3000 immediately started hiccuping. Based on that, it seems to be tied to the speed, which leads me to believe the belt is slipping at the higher speeds, which is a real bummer. Not sure what to do at this point. I don’t want to risk damaging my existing belt if it keeps slipping, so I guess I’ll work at 2000 or less for now.

You can snug that belt up and it might help, but you might prefer to have support take a look at it. Instructions for tightening the belt are here:

Dude, don’t you have a set or six? (I find those things everywhere…except when I need one.)

Yeah, my place is a mess right now lol. I got some here, just need to locate them haha

Haha would you believe I didn’t find one 3MM in this entire tin? I ended up finding the fancy one instead… 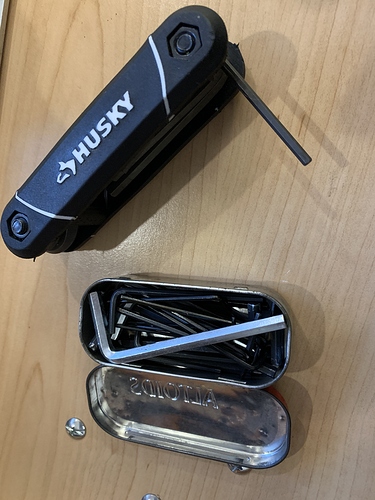 @Jules I followed the instructions to adjust the belt, and tried running the original job again. It hiccuped at the exact same spot, between the first and second boxes. The board is not on the crumb tray in the same place it was. I moved it a second time about 2" closer to the passthrough slot and I still got the hiccups, misalignments at the 3000+ speeds. The misalignment on 3000 speed is much less severe when compared to the 4000 speed. I might try adjusting the belt again, but if it didn’t work the first time, I doubt it will work a second time.

When the job finished, the print head went back home, but seemed to move too far left and hit something on the left side. I suspect it’s because the Y coordinate had shifted a good 1/2"+ as the print commenced. 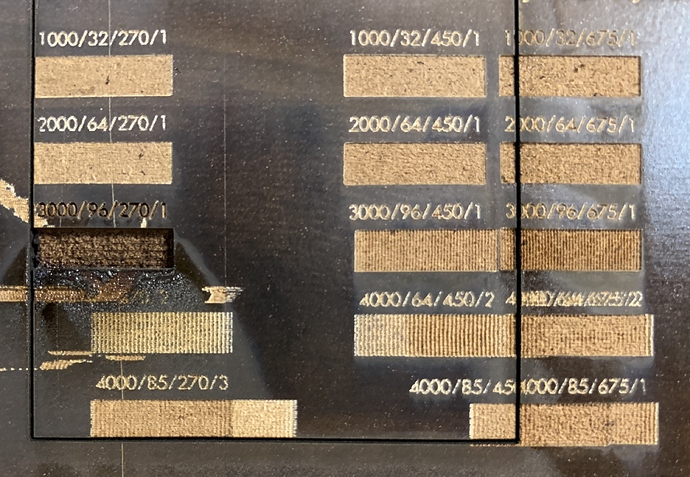 Can you explain why this rollout is taking longer than expected?

There are lots of factors going into the speed of the rollout, including stuff like other work items, time to investigate reports, etc. We guessed wrong.

Can you explain how my exhaust setup is amplifying the noise? I would like to change it to get 70db, that would be amazing.

Coupling the hose to anything allows that thing to act as an amplifier. Just throwing the included hose out a window should get you down around 68-72. (Other folks have suggestions in Beyond the Manual).

I would love to also get the compact filter. When are the available?

No date announced yet, I’m afraid.

For those who haven’t received the update, when can we expect to receive that?

I don’t have an ETA I’m afraid.

Just got the update!! Thank you!!!

Glad you got it.

Any ideas what the problem could be? Belt slip?

Would you mind filing a report in Problems and Support? That way our team will see it. They’re chasing a bug where high speed engravings of vector images exhibit a problem like you describe.

Got the update, no idea I had it until I selected auto focus and the head moved so fast it frightened the life outta me. Hopefully can play with it when I get time. Thanks.

@RookieWookiee you might need to open this up as a separate post in Problems and Support to start a ticket on it and make sure that Support sees it. We’ve done about as much pre-testing as I know to do. Sorry we couldn’t find it.

@RookieWookiee I’ve personally seen this problem on Vector engraves at 4000 speed but it doesn’t seem to happen with Raster engraves at the same speed. This is also not the first person to post on here about it with specifically vectors at the new speeds.

Thanks for the troubleshooting suggestions @Jules. I’ll post the issue over on the Problems and support thread.

I have received the upgrade and love the faster speed for engraving.
Thank You Glowforge team.

Sometimes if a stepper is being pushed just a bit too fast it can stall. So a stepper motor gets very rapidly pulsed electromagnetic “steps” sent to it from a controller. Kind of like being pulled along by a rope tow on a ski hill. If you can hang onto the rope and you are free to move you will move at the same rate as the rope tow. If the stick to the snow is stronger than your grip you will drop back to the next handle or knot in the rope. Same with a stepper. Does every thing move freely? Maybe the higher speed of the upgrade is just too agressive for your machine.
Do you hear a sqealing noise at all when the unit skips? That could be the head stalling momentarily. If the head stalls, now the contrller has lost track of where the head is - afterall, the controller sent out x number of pulses but the head could not move fast enough.
This problem can persent in much the same way as a belt jumping a tooth. It is a similar problem, only the tooth that jumped is magnetic, not mechanical… 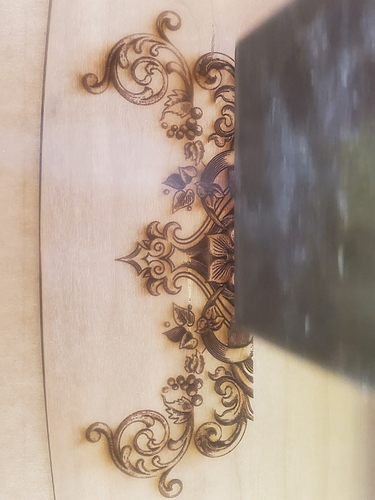 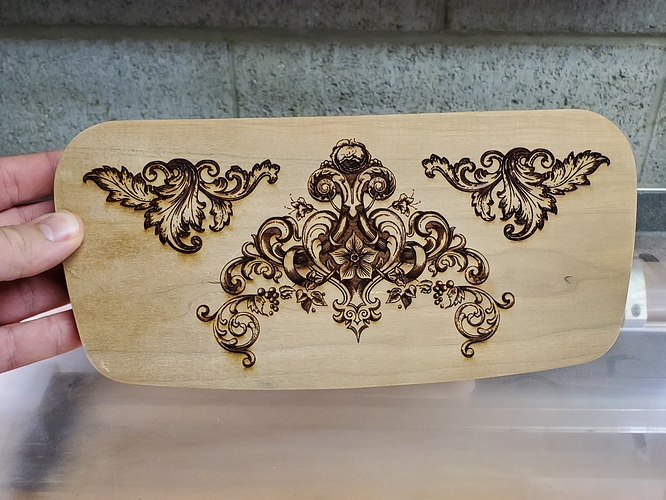 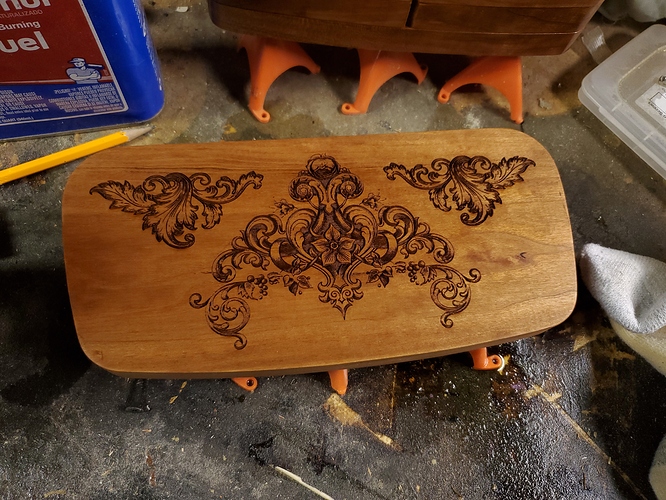 Lid for my daughter’s jewelry box for her 5th birthday. 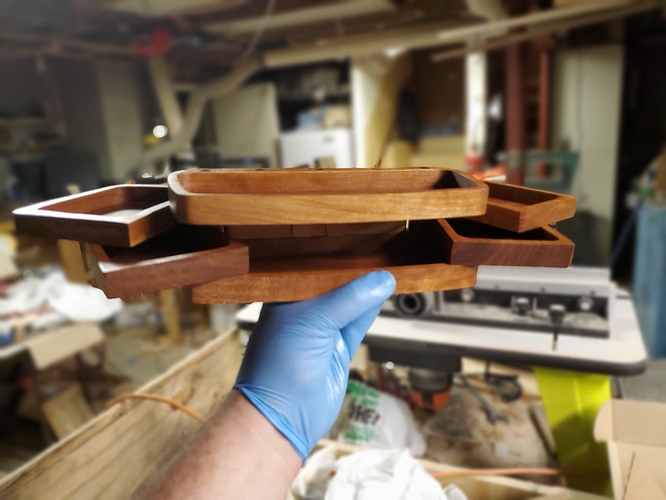