If that’s not a typo, it brings up, to my British eyes, the vision of a vehicle parked in a back street, with dodgy looking characters, carrying loads of tools up a ramp by the side of the van, a quick dip through the roof, a wad of green backs dropped into the window of the cab ( just rolled down enough), and they scuttle of back to their poorly lit workshops, to produce another load of crap tools for the next week’s market.

Now tell me it means something else.

Yes, early morning iPhone autocorrecting can to van.
I do have two vans. But they have nothing to do with lasers or vinyl. 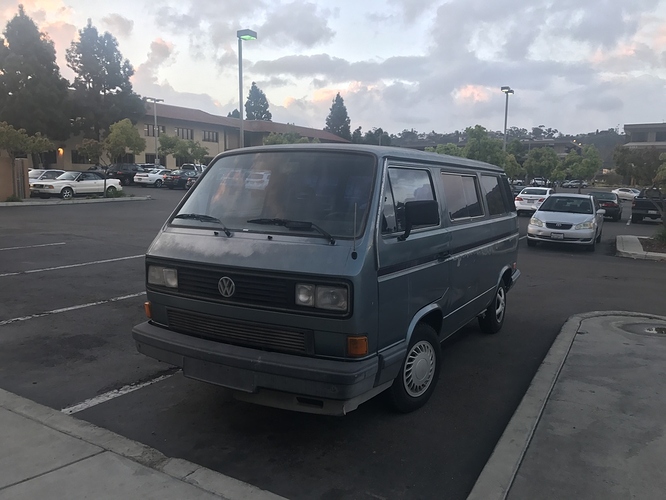 I do have two vans. But they have nothing to do with lasers or vinyl.

But with the delivery of your GF and a portable generator you can fix that!

And, since I like to complain and since my soul is black and I’m a troll and who knows what else people might think

Oh yes. This is exactly what we all think!

Thanks for the walk through. Very interesting process and problem solving. 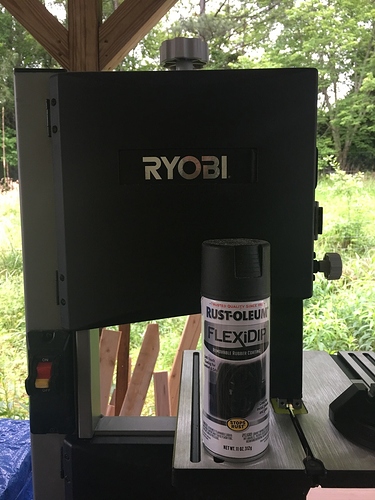 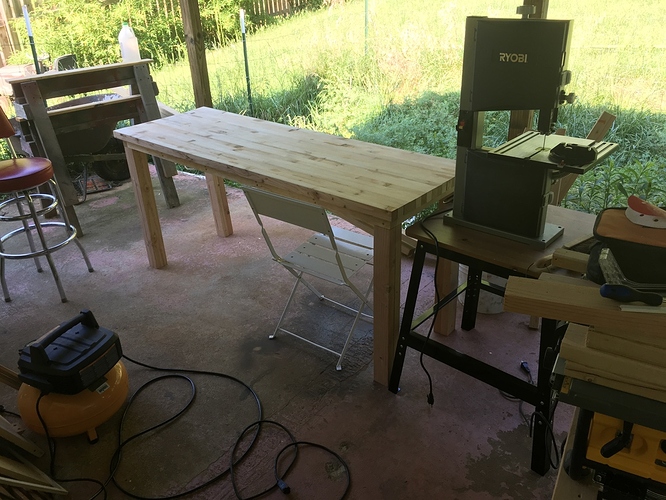 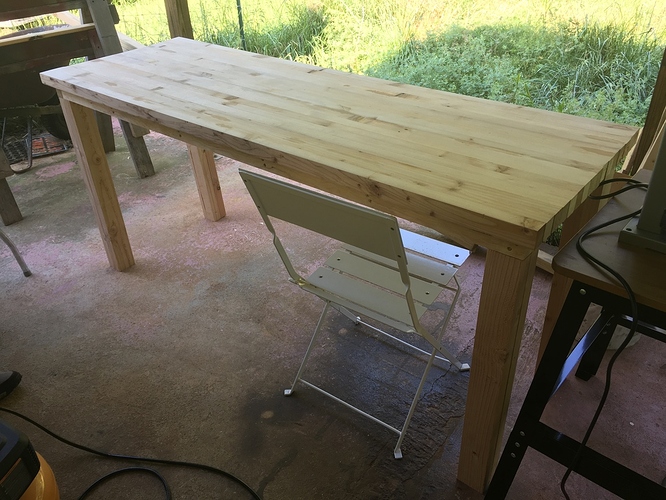 That is a gorgeous workbench and it looks very solid. I like your paint job too!

I ordered a roll of blue polyester tape from Prismatic Powders (along with a variety of colors of powder) and it came in today. Unlike the Eastwood stuff, this stuff is only rated up to 400ºF. Meh, whatever… So, I put some on an aluminum thing I made. 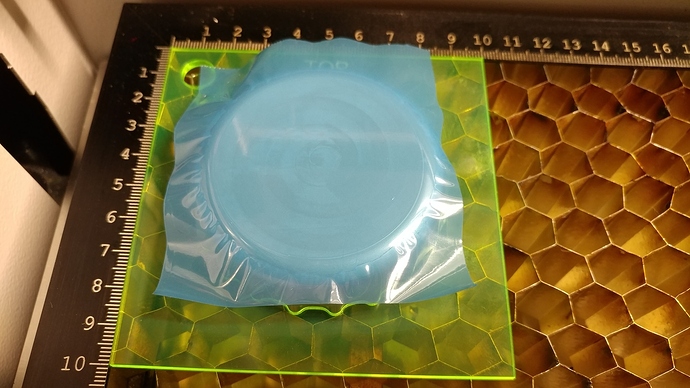 And raster-engraved the shapes I wanted to powder coat. 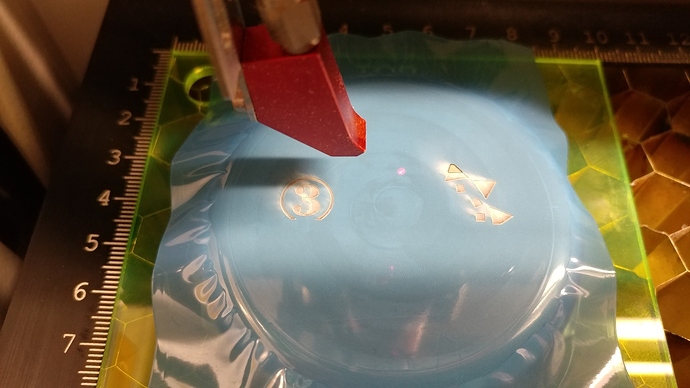 … I decided it wasn’t quite enough power, so I cranked it up a bit and started over. 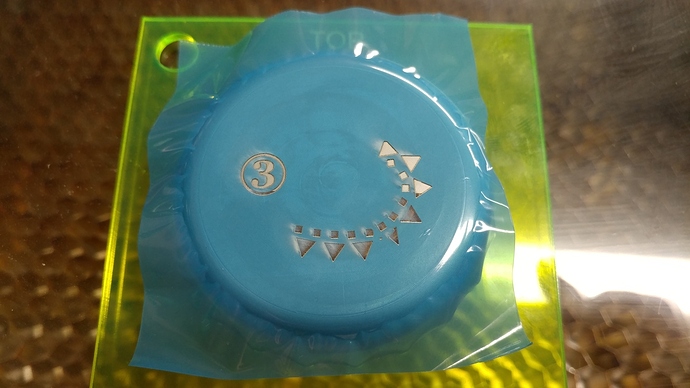 That did the job better. In fact, the places that got hit twice look even better yet. The charred glue or whatever was left over (probably something highly toxic) wasn’t too hard to clean off, but maybe two passes would be useful for larger jobs.

I shot the powder, baked it, let it cool, and stuck it back in the laser for some more engraving, this time I ablated everything except the stuff I was keeping. 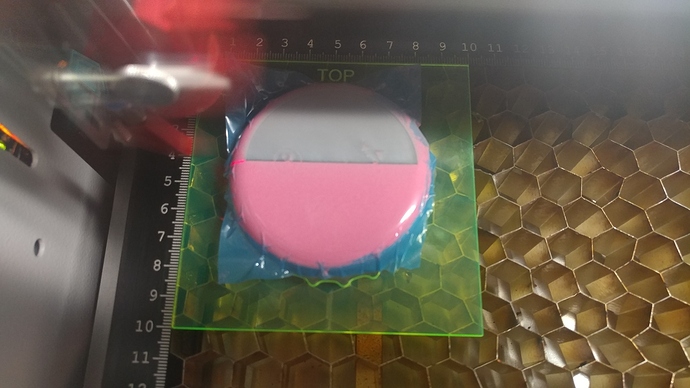 About 3/4 of the way through doing this I realized that I probably should have spent more time on the computer to strategically vector cut and engrave only the areas that were going to be difficult. Then I could have just peeled the tape up in one piece and thrown it away instead of having it go through my laser filter. This one would have been quite easy and I probably could have just cut around all the shapes and peeled. Next time I’m only going to engrave the areas that would be a pain to weed, cut around the remaining shapes, and peel; I think that’ll be better in almost every way.

Here’s what it looked like straight out of the laser. That leftover residue was incredibly hydrophobic. It was hard to get the Comet wet because every time I would place the wet toothbrush on the surface the water would just bead up and roll off. 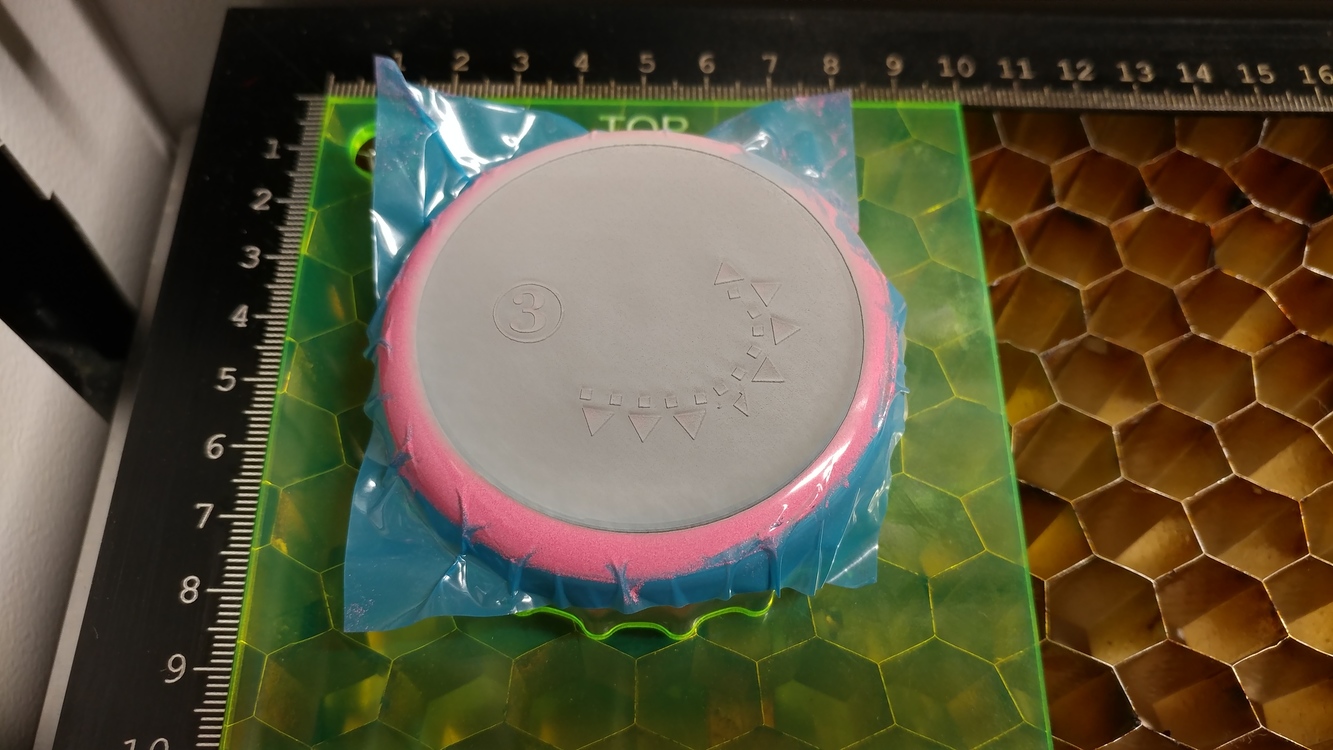 Under the frosted layer there was the glue/poison/ash residue left over. It was harder to clean off than Plasti Dip, but not too bad. 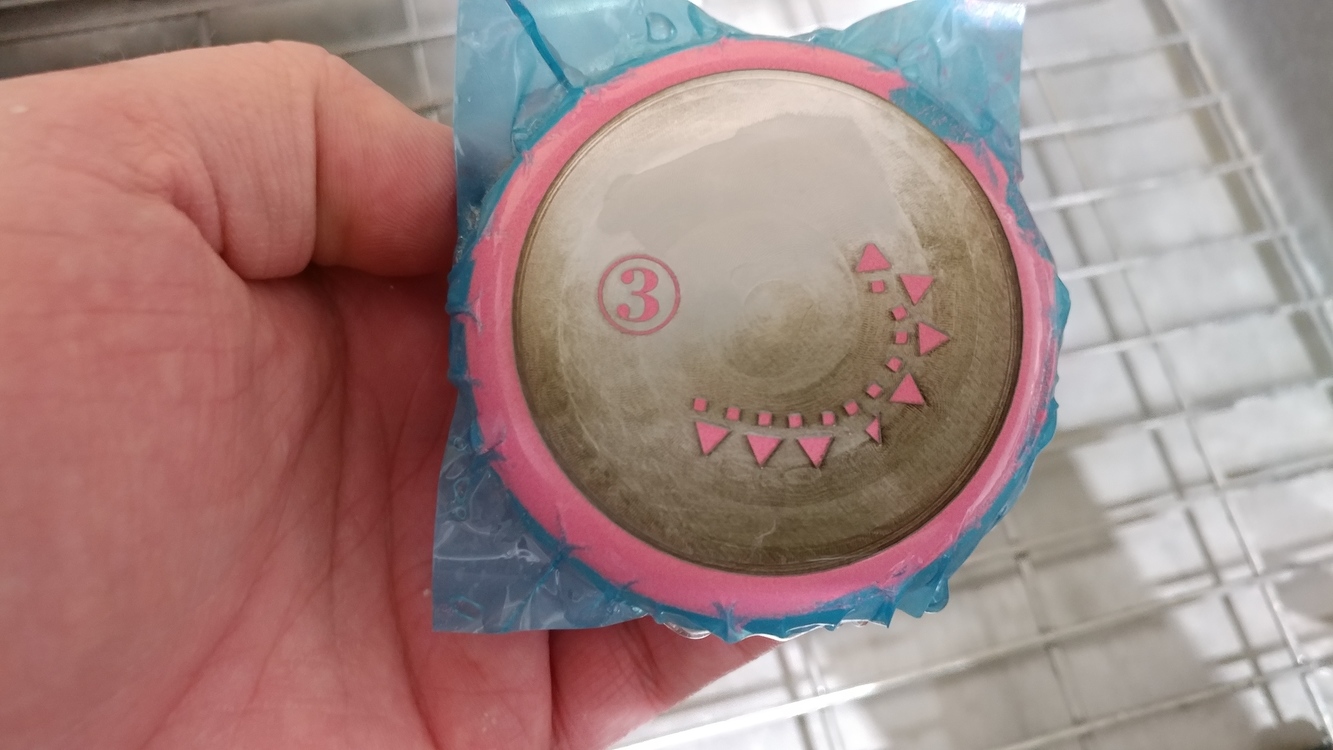 OK, all cleaned up. 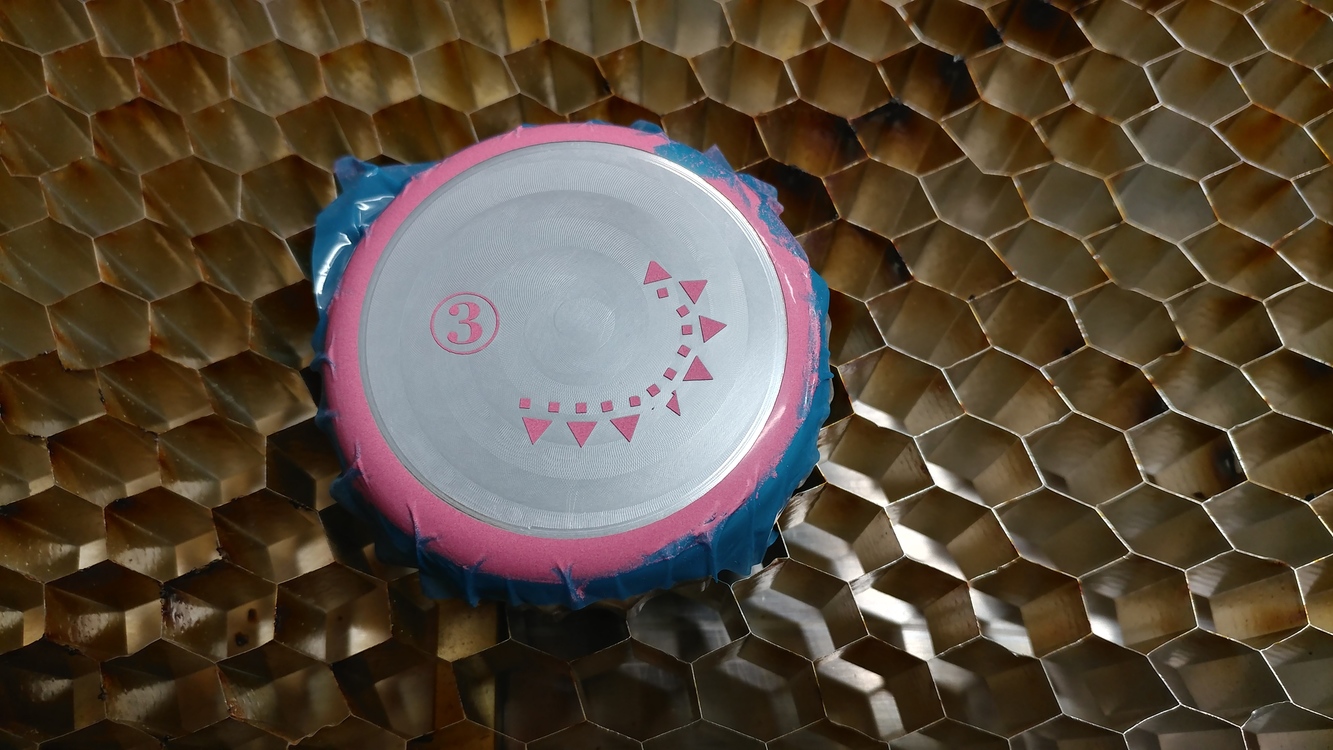 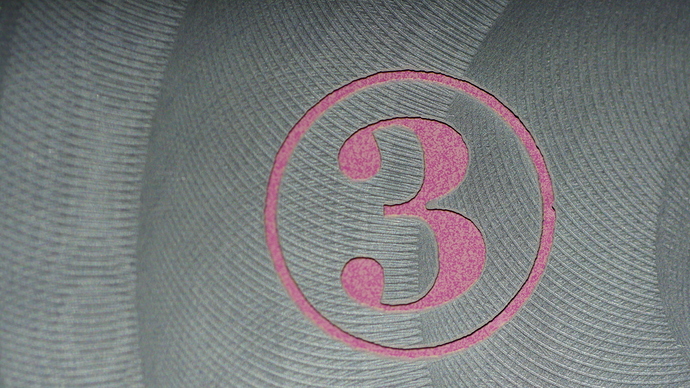 The machining marks look so cool! 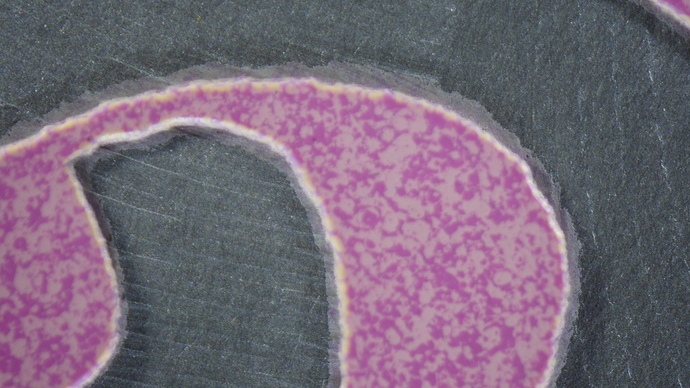 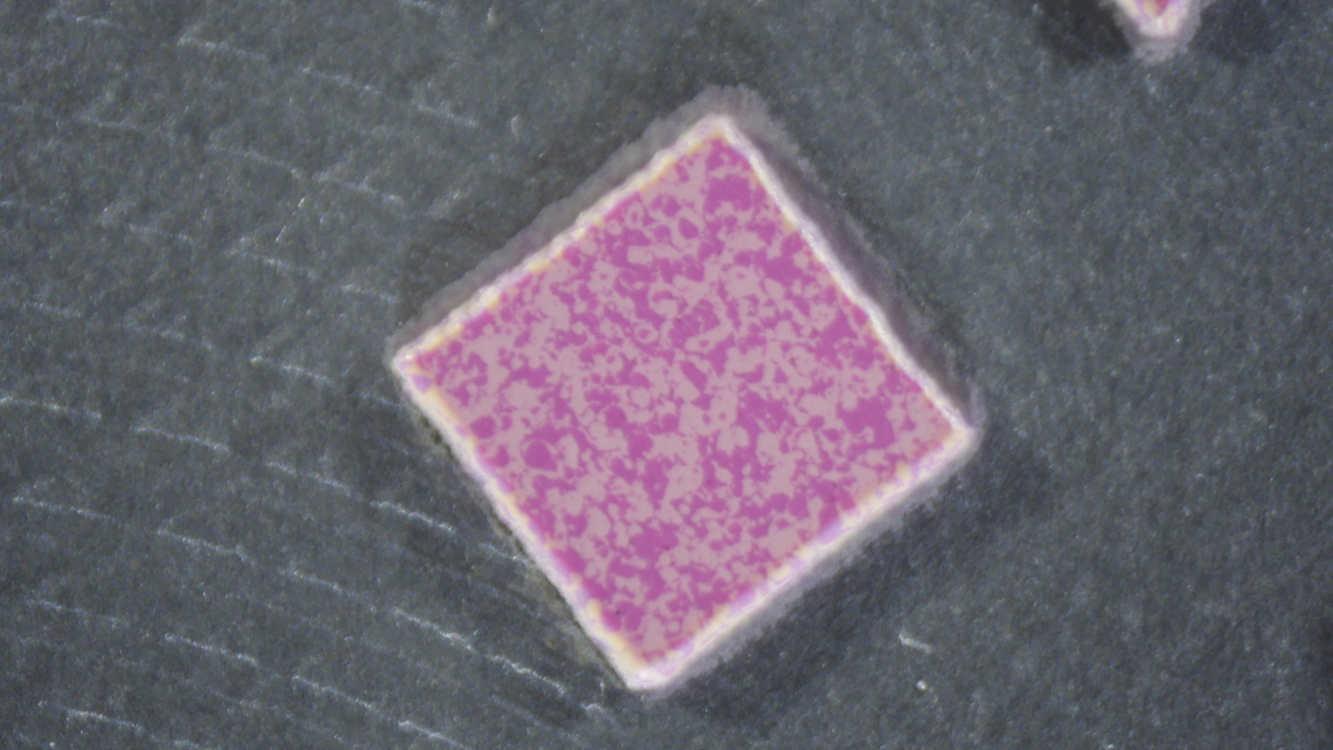 I’m not thrilled with the color - pretty splotchy. Maybe I should have let it bake longer. Also, the little edge anomalies are here as well. Maybe they’re just from the ramp-up and down of my laser.

Obligatory “with coin for scale” shot. 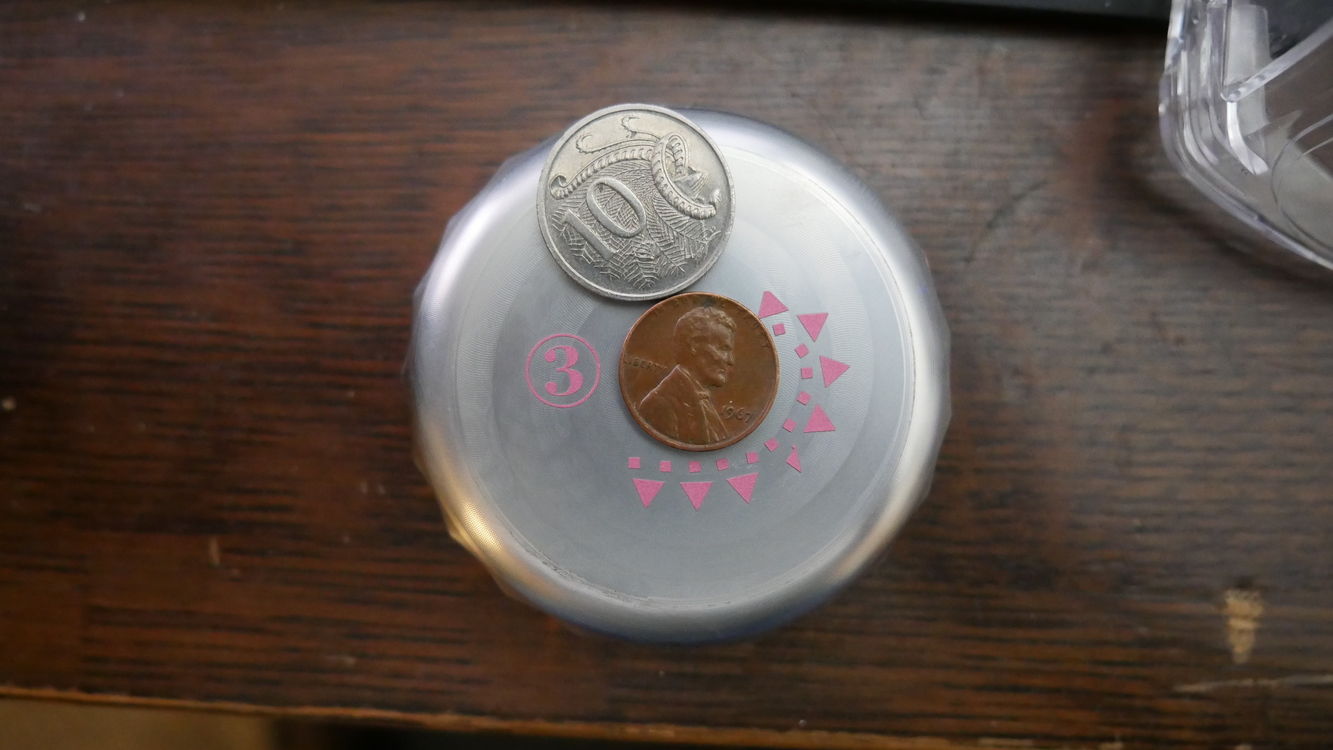 17 Likes
Accessorizing Your Glowforge (Like the Fashion Industry)
Glowforge shipping date, beta releases, and bonus materials
Weekly Highlights for the Week Ending May 6th, 2017
Hirudin May 6, 2017, 3:29am #41

Between the Plasti Dip and this blue tape there isn’t a clear winner.

###Price
The Plasti Dip is less expensive. Comparing the advertised coverage area of the two products, Plasti Dip is ~1.4¢ to 0.7¢ per square inch and the tape is ~4.8¢ per square inch. … huh, I thought the price difference would be more dramatic. Maybe I should divide the Plasti Dip number by four since I’ve been only putting one coat instead of four.
###Ease of application
The tape is pretty easy to apply. It also doesn’t need to cure for multiple hours. And you don’t need to wear a mask while putting it on.
###Ease of lasering
I’d give this a tie. Both used the same process and the same speed, the tape needed extra power, but that’s not really a concern that affects “ease”.
###Cleanup
I’m going to give this one to the tape as well. Although I haven’t actually done it yet, I think the selective engraving (to weed the small stuff) and cutting the large stuff will be very easy and fast. Even though WD-40 works basically instantly on the Plasti Dip, I would still end up doing two or three applications as little bits would stick in the little nooks and crannies. Then I’d have to do a separate cleaning to get the oily WD-40 off.
###Mask quality
I’d give a slight edge to Plasti Dip here. Very slight. Plasti Dip seems to be thinner. I’m thinking that thinness will make very small pieces less likely to get brushed off during the cleanup of the metal to prepare it for the application of powder. (Pic below to show tape thickness.)
###Masking for multiple colors
I’ll have to come back and update this after I’ve done some multiple-color powder coating using the tape. Plasti Dip works very well for doing multiple colors.
###Availability
When I decided to try Plasti Dip I had to run to the nearest auto-parts store and pick some up. For me, that meant about 15 minutes of time invested. I suppose someone locally might have this tape, but I wouldn’t bet on being able to find it. Otherwise the tape needs to be ordered from theinternet.com.
###Safety
I dunno… You start burning stuff with a laser and who knows what you’re getting.

Prismatic Powders says this tape is “1 mil”. It didn’t look or feel like it was a thousandth of an inch thick so I measured it. (I don’t get many excuses to get out the micrometers, so I takes whats I can gets.) 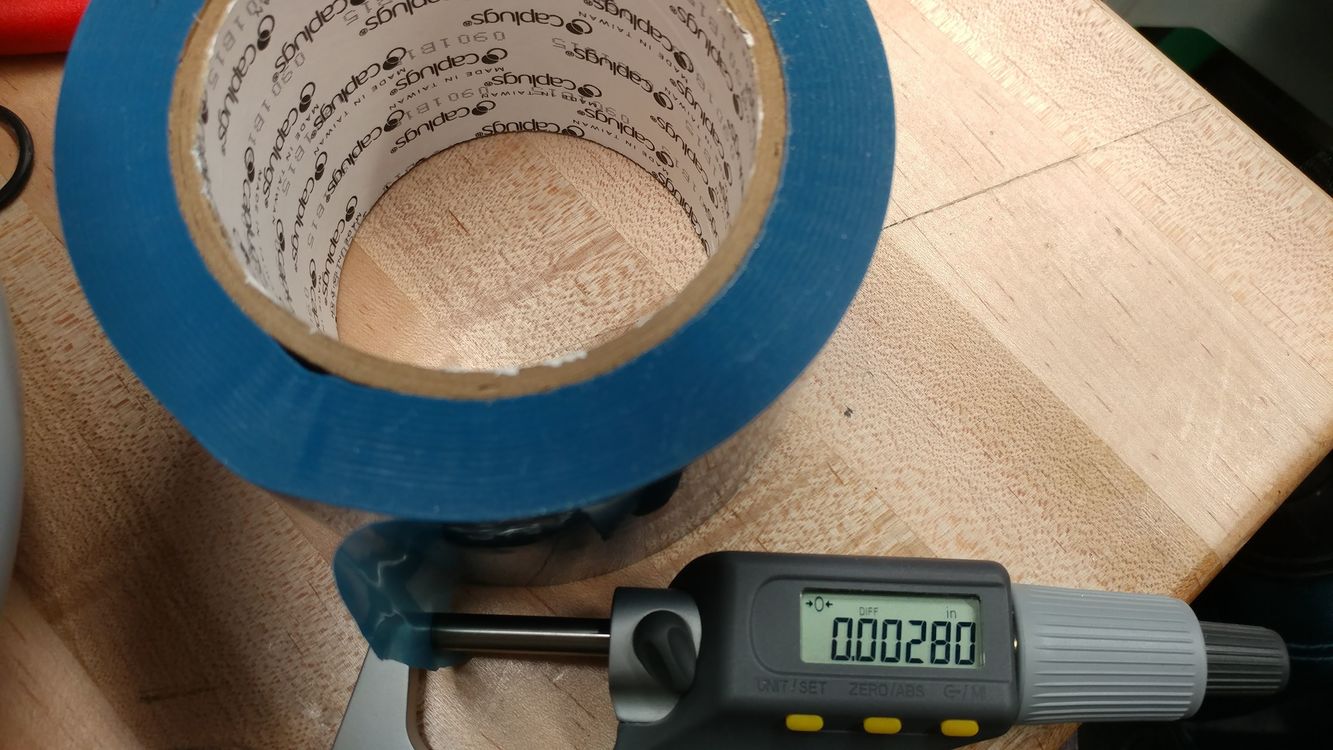 I realized I should have included polyimide tape in my comparison. Um… I’ll just say that the only reason I can think of that I would choose polyimide over the polyester is that it might be a little cheaper. It creates so much of a problem when demasking though (because it tears so easily) that I would avoid it unless I didn’t think I had any other good options (which is what I thought until last week).

9 Likes
Glowforge shipping date, beta releases, and bonus materials
Accessorizing Your Glowforge (Like the Fashion Industry)
johnbrooker May 6, 2017, 7:16am #42

I would suppose the quoted thickness for the tape of 1 thou is the paper backing. They didn’t add the glue layer, which you are also reading ?

Hmmm, yeah, I could buy that.

Yes, all of this to to produce an acid resist mask for etching metal. It can be done with a chemical like Ferric Chloride, or with an electrolyte, and a few volts of DC.
https://www.youtube.com/watch?v=M1ZCVgdnnpY

Got five colors put down, figured I’d better take a picture before I attempt the clear coat. Although I’ve gotten somewhat good at doing multiple layers of powder coat, it’s still a challenge. Then since I had the pic, I figured I’d post it up. This was done entirely by masking with the blue tape. 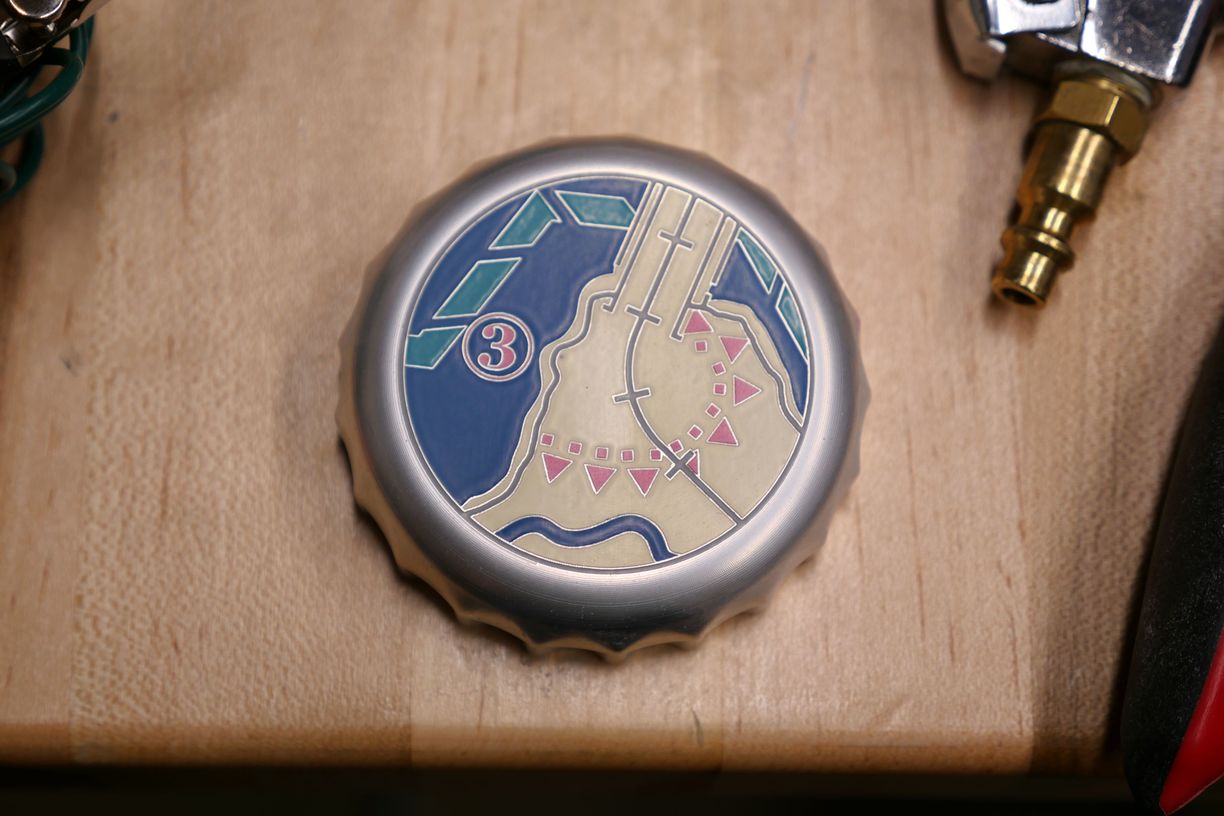 P1300357e.jpg1224×816 109 KB
I didn’t do any compensation for kerf on this, so the colors ended up overlapped slightly (no kerf compensation meant that the holes in the mask were cut slightly oversize). To try to fix that, I did a raster engraving of a thin outline around all the colors. That step added a decent amount of time and uncertainty that I’d rather avoid. For instance, I can now see that there is still some crud in at least one place that I still need to clean out, even though I did the rastering twice.

The next time I do this (which will be real soon) I’m going to try to make the holes in the mask every-so-slightly undersize so that the different colors will be close together, but not quite touching.

That is gorgeous! Now you are making me want to learn to do that.

That looks fantastic! (Love the color choices too!)

Wow. And talk about scale.