During the engraving process the laser shifted left multiple times for a total of about half an inch, then everything after is offset. So the score, engrave and cut layers don’t line up. It was a PDF file of about 3.75x5.25 inches directly in the center of the bed. The piece of wood was .27 inches thick which I typed in before printing. 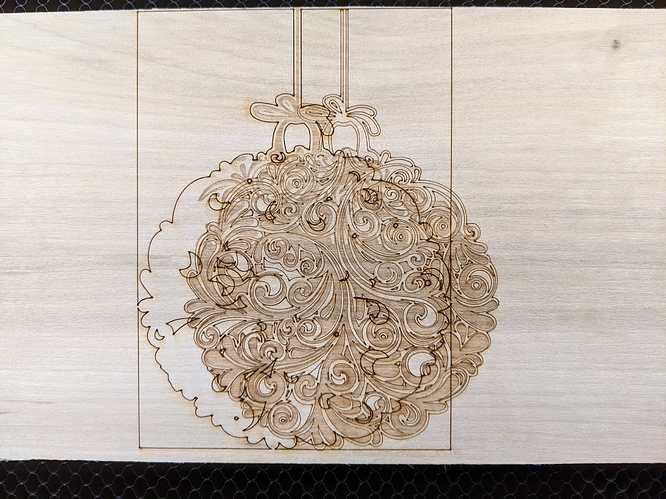 Can you take and post a photograph of your white ribbon cable in the laser arm from this angle?

Just open the lid, lower the front door, and take a photograph of the white cable in the laser arm.
It should look something like this: 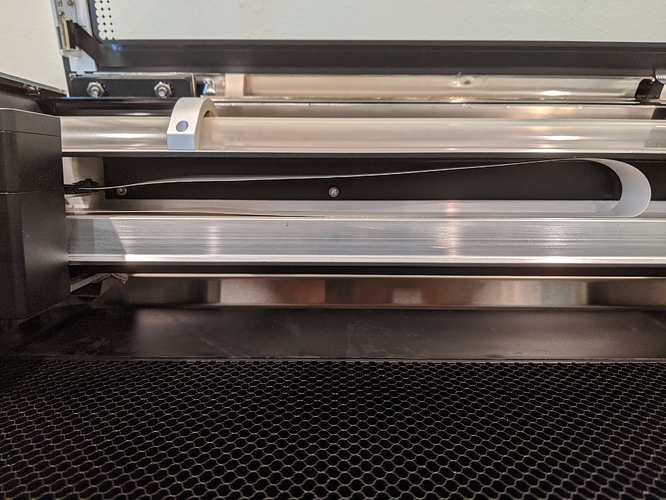 Yep, that looks okay…the next thing to check is the tension on the belt underneath the laser arm. There is a little GIF here:

I’m sorry about the trouble with your print results when running at higher speeds. Regarding your alignment, since your unit engraved first and then cut, the cut being misaligned is likely related to the shift in your engrave. Could you check the tension of the belt below your laser arm for me? When pressing lightly on one side of the belt, the other side should not move. Like this: ​[image]​ (You should see an animated image above) Let me know if the belt is loose and I will follow up wit…

If that belt is loose in any way, you can tighten it following these instructions:

Well there could be a file issue. I’m pretty new at this but I did have the same shift happen with another file I tried engraving, scoring and tracing. The score/cut both shifted partially off the wood. Maybe the files are too detailed? I just tried to tighten the belt as suggested (although it didn’t seem too loose) and am about to try again. Thanks for the suggestion.

The Glowforge folks are going to ask you to print the gift of good measure as part of their testing. I would try that first on some proof grade wood just to see if it is truly the fault of the machine.

Right, I just did that on the proof grade draftboard. The alignment was good except it didn’t cut completely through the circles. The problems occur during the engraving phases so I guess I need another file that has more engraving to really test it out. I also re-tried the ornament PDF and heard a light “thunk” and noticed the engraving offset by one millimeter according to my Gift of Good Measure, so I canceled the engraving again.

That sounds like it is hitting something. You might want to check for debris on the tracks, turn off the machine and move the laser arm and head slowly back and forth, front and back, to see if it hangs up on anything.

Also, you might want to re-seat the printer head and check it for issues.

Next time you test a simple engrave…watch it while it works…you might see where the problem occurs and can focus on looking things over in that area.

I re-seated the printer head, looked at the belt and tracks and it all seemed fine. Then I printed the cut layer (two passes) and then the score layer (two passes) individually with no issues! Photo attached. (Upper right is the beginning of the engrave layer with the offset.) Ornament%20score%20and%20cut%20success|374x499 I’ll try just the engrave layer by itself again and see what happens.

Uhhh…let me ask you this…how fast are your speeds on the engrave? The recent update has boosted them astronomically, especially for Pro models, and the speeds might have defaulted to something higher than you’re used to. Your engrave up top looks really light, which would happen at higher speeds. It would also modify the margins, so that might shift something.

Just check the speeds - let me know what it is for the engrave.

Yeah, I’d run it at just over 1000 with full power once. The higher speeds can cause skipping for small prints. Best to start out slow and increase it once you’re sure it will work at the slower speed.

Looks like the speed was it. Engrave at 1000 with no issues. Thanks for the help!

Fantastic! (Support can take note of the speed issue, and I’m sure they’re working on it.)

I’m so glad the advice from @Jules helped, and I appreciate you letting us know about this! I’ll make sure this reaches the team so that we can continue to improve.

I’m going to close this thread. If you run into any other trouble, feel free to start a new thread or email us at support@glowforge.com.