Just opened my GF last night. This was my first attempt at something besides the test cuts. I’m using silhouette design studio (only because I know it) whyyyyy can’t I get the middle of some of the letters to not fill? I tried google and you tube, but it didn’t help much. Can anyone tell me what I’m doing wrong here? It’s probably something so obvious. 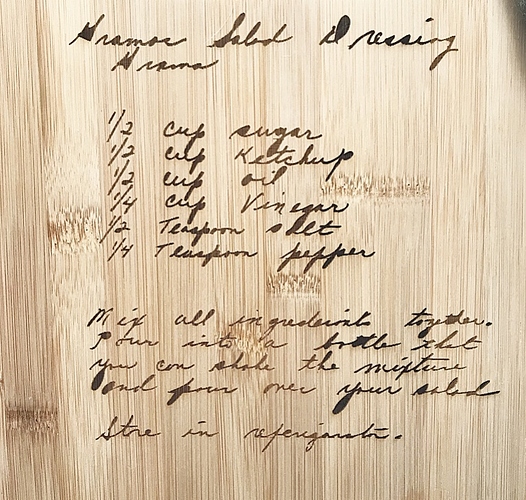 I am not familiar with Silouette Design Studio, but I think you might have better luck scanning this so that there is a better definition of the handwritten letters. Alternatively, you could snap a photo of the original and try improving the clarity before engraving.

I don’t know that software either, but make sure the object has Fill turned off. The GF is engraving every closed shape as if it’s filled. To the GF, “No Fill” is different from “White Fill”. But in your software they might look exactly the same.

I think I know what’s causing it, (might be the Fill Rule issue) but I don’t have a current copy of Silhouette Design Studio to work with to tell you how to deal with it.

You can try this with your text:

If that doesn’t do it, you might need to rasterize the text before saving it.

The discussion of what is happening is here:

I’ve used Corel for many years, in screen printing and other arenas, but had never heard of, or had to worry about the even-odd and non-zero fill rules. After reading various sections of the Matrix, and a lot of @Jules tips and tricks, I finally started figuring out how to adapt Corel to the GFUI. Let’s say you want to build a border Step 1, you draw two rectangles, and then combine or weld them into a single curve. [image] Both are created from the Rectangle tool and drawn from left to rig…

The easy fix is to simply rasterize the text. That will always work. But like I said, i don’t have a current version copy of SS to test the output, and the problem with the Fill Rules happens when the file is saved as an SVG from certain programs.

Or you can try saving it as a PDF instead of an SVG if your software allows it. That sometimes works.

Jules. thanks as always for your support to this group. I “met” ebaon on the Facebook group just as she was prepping to make her purchase. When I saw her request for help there, I suggested she post her issue here on the Forum, and told her… Jules will probably have the answer!

Chuckle! Not 100% sure on this one, it’s just a theory. She’s going to need to try a couple of things to see which one works.

yes, but my money says (to mis-quote Wesley Snipes)… Always Bet On Jules!

Thanks everyone!! I will try all of the suggestions and keep everyone posted!

Ok. So that didn’t work. This is what I’m doing from the beginning
I start with a png of the recipe
I then trace it and detach.
What I think is happening is that I am not getting the “background” out of the negative spaces.
I have saved it in both svg and pdf neither makes a difference. Maybe I’m not tracing it properly?

Oh, you didn’t say you were tracing it…

Don’t. You can engrave a PNG file without doing any further work to it. It’s a raster image already.

(You do want there to be as much contrast as possible between the text and the background…black and white if you have white in the PNG.)

Just create a new file in the Glowforge interface by going to the Dashboard and click on New Design:Upload…then scroll to your PNG file and choose it. It will open in the interface ready to be engraved.

I had a feeling it was something simple. Lol. What if there is a lot of background in it that I don’t want? Here is the png 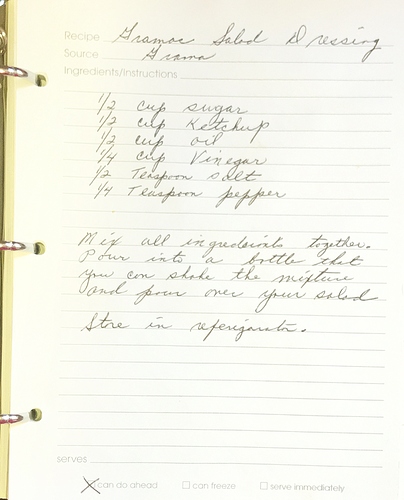 Those are a little harder to deal with…they take some cleanup first. You’ll want to remove the background in a program like Photoshop or GIMP first - save it as a PNG file with a transparent background.

If you wanted to do the trace in Inkscape, you might be able to get a fair result, and you wouldn’t have the problem with the centers of letters coming out filled. The issue is with the Silhouette Studio software…we don’t have a lot of folks who have that here.

If you can rasterize your trace results in Silhouette Studio, that would also work, but I don’t know how to tell you to do that.

Jules…thanks so much for your help. From your suggestions 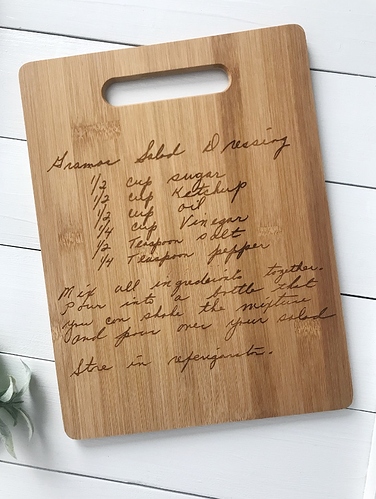 Awesome results and “purty durned quick” as we say around here! Congrats!

Thanks for the help in this thread, everyone. That engrave looks beautiful, @eboan0112! If you run into any other trouble, please start a new thread or email us at support@glowforge.com. Happy printing!