Last week I posted my most recent project, whose most notable feature was probably the use of a (speaking loosely) post-and-beam style of construction rather than box construction. The main joints I used were what we might call “simple finger joints”, i.e. tabs inserted into holes cut into the crosspieces, also known as mortise and tenon joints. My goal for that project was to make them somewhat decorative, and I sketched up a number of ideas. I thought it might be useful for me and for others if I actually worked up all of those ideas into solid examples. I got that idea from @evansd2, though as you will see this is definitely the low-rent version (overly charred plywood as opposed to thoughtful combinations of nicely sanded hardwoods!).

All examples are from 6 mm (1/4") thick Baltic birch plywood, with the occasional use of 3 mm (1/8"). All of the examples use basically square joints, but that isn’t at all necessary, and some interesting designs could come from different shapes, clustering, etc. 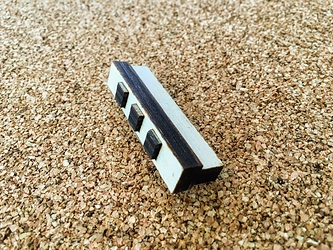 (a) Simple through-tenon
The simplest “simple finger” joint is just a tab flush with the surface. This takes that idea and extends it by going all the way through the mortise, but not too flashily. Could look neat in a contrasting wood, or sanded clean, or beveled/smoothed by sanding. 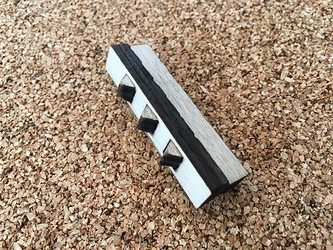 (b) Ostentatious through-tenon
Another approach to a through-tenon is to really lean into it, with spikes or other shapes. 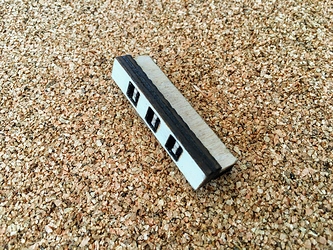 (c) Sculpted through-tenon
This tenon has been tapered so that only the middle portion of each tenon is readily visible. I’ve sanded the ends to make them stand out, but I also cut them slightly short, so they aren’t quite the through-tenons they were meant to be. 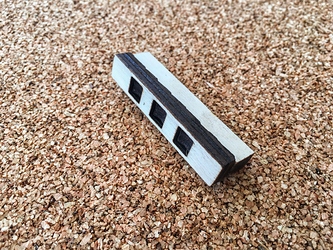 (d) Sculpted tenon
This is another idea rooted in shaping the tab itself, but it is not a through-tenon. The tenon is “scalloped” so that it curves back from the opening of the mortise. Unfortunately, the char in the example is heavy and it is hard to see. Luckily, this is the join I ultimately used for my project, so you can see it here: Coffee gear organizer (Aeropress). 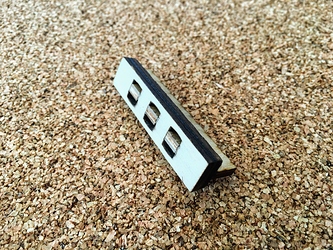 (e) Half-height tenon (false mortise)
In this example, two thicknesses of wood are used. The cross-piece is 6 mm thick, but the fingers are cut from 3 mm ply. The cross-piece is depth-engraved around the tenon to present a look similar to a 90° rotation of example (c) above. I think this would look nice where the cross-piece is oriented vertically. 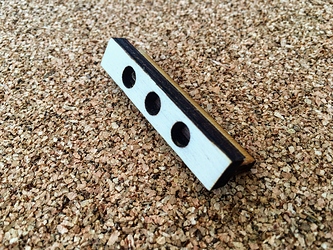 (f) False mortise, half-depth tenon
Similar to (e), but here the tenon only penetrates halfway through the cross-piece, and the depth-engraved area around it is carved in a purely decorative shape. 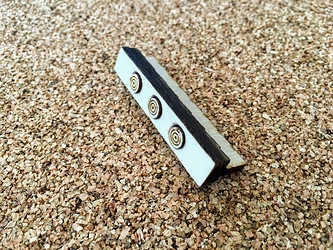 (g) False mortise with cap
The same idea as in (f), but the depth-engraved area is filled with an engraved cap. Many cap shapes are possible, of course, and they could be done in contrasting materials, use 3d engrave, etc. Here the intended impression is that the tenon is of a round through-tenon. 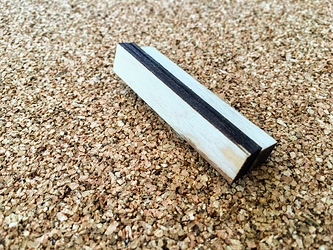 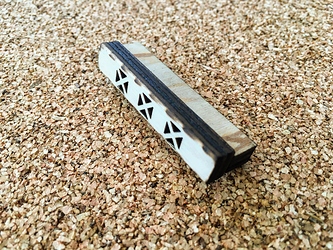 (i) Half-depth mortise with decorative grill
This example is the same as (h), but the cross-piece was flipped after engraving in order to cut decorative patterns into each half-height mortise.

I hope you found these examples interesting. You can download a design file containing all of the examples here: Tenon-Mortise Examples.pdf (75.7 KB).

Thanks! Very interesting. I think I use a similar method to make axles for my

machines. But my finger joints are internal; all you see is the outer char on the axle.

I like the “Ostentatious through-tenon” joints. I could see using those to make a design more decorative.

You may find this interesting, there’s something overlap in our techniques, especially shaping the ends of fingers.

Looks really interesting and I’m going to have to try them. Thanks for sharing.

Absolutely! In fact, looking at this one again, I’m sure that it subconsciously influenced my use of the “scalloped” finger example here!