For the party I had 3D printed a Trumpkin, so figured it needed a sign. So quick trip to AI, on some

maple put an appropriate hashtag on it. Of course didn’t think about the fact that the “p” defended below the cutline… 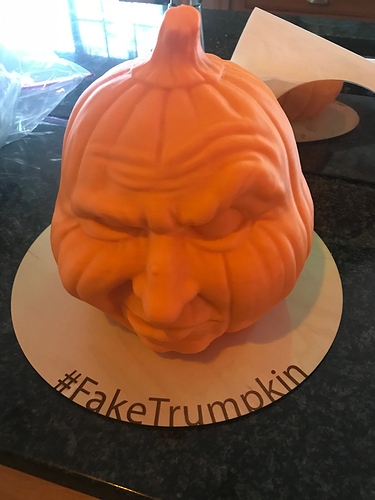 Wow … love your Trumpkin! We will next need a 3D printer!

3D printers are amazing. What an incredibly accurate likeness!

What about the comb-over? I guess you could use pumpkin guts for that.

You made our current President laugh!!

Is there a “block” or “ignore” feature on this forum?

I think the easiest thing would be not to click on a topic that has clearly been labeled with something that runs the risk of offending you or going against your beliefs or covers something you’d rather not discuss on this forum.

I tend to think best practice around here should be to avoid posting anything of a political, religious or otherwise potentially polarizing nature, but I also get that we’re on a forum for tools designed to help us express our creativity, no matter which way that creativity may lean.

I personally don’t like the topic of this post but I also wouldn’t want to miss out on the other awesome stuff @henryhbk posts, so I personally don’t find a block/ignore feature to be useful in that regard. But that’s also just my opinion.

TL;DR - no, there’s not a block or ignore feature. probably best just not to click into posts you know contain subject matter you may not like or agree with.

Yah. If you think it will offend you, don’t click.
That’s just something you need to be aware of in any Forum, or public space for that matter.

It’s not like this topic was clickbait or anything.

I agree. I think @henryhbk’s title includes enough to tell me immediately what the subject matter is going to be and that should be enough for me to use my best judgment about whether I want to join in on the discussion (preferably in a constructive way) or not.

In any other forum, I can block users. Politics has absolutely ZERO place in this forum, period.

Wish I could comment. But I personally think snark and sarcasm are two of the lowest forms of human communication. I want to respect myself in the morning.

BTW: Most people won’t even see the descending P.

I’m not even sure what part of this is political, or which side would be offended by it.

It’s political satire maybe. And that has been socially acceptable since Roman graffiti.

which side would be offended by it

Yep. I can remember seeing plastic masks of the president (all presidents, regardless of party) every Halloween since childhood.

@willcfc - you forgot to add IMHO.

Politics has absolutely ZERO place in this forum, period.

To be fair, you’re the one bringing the political side into it. President Trump has, on multiple occasions, used the term “fake news”, and this is in fact a fake a trump replica in pumpkin form. I think it’s incredibly witty and clever combining the two. Without wanting to going to a more political aspect, I believe whatever side you’re on, you can appreciate the fact that this is impressive.

I’ve found myself on occasion misreading something and becoming offended by it, but realizing the actual intent of the post, and then realizing that taking a breath and a step back helps a lot. You’re baiting for people to reply to you when coming into a place of fun and asking

Is there a “block” or “ignore” feature on this forum?

Would it not have been simpler to go the support section of the forum and ask this? It certainly would have seemed much tamer and would have left any political drama out of it. It also would have brought like minded thinkers to one place to be able to discuss the pros and cons of what you would like to happen. Maybe I’m misreading your intentions, and I’ll apologize beforehand if this is the case, but all I’m saying is that we have enough problems IRL that coming onto a forum where people enjoy the things we make and blatantly throwing out a snide remark on something you disagree with is unnecessary. I’ll also point out that I’m not trying to silence you, it’s a free common space, and I offered a solution to your inquiry with a proper place for what you’ve asked. I agree that the first best practice is avoiding clicking on a link that you may become offended by, but curiosity can get the better of us at times, so I don’t blame you for wanting to know what this post was about, but the next best practice is as I said, finding the best place to post next.

With that said, I love this! Great work! @henryhbk

How any human being could align themselves with either Trump or Clinton and get emotionally invested boggles my mind. It’s so sad, I try not to even think about it. I hope America gets the president it needs sooner than later.

Politics has absolutely ZERO place in this forum, period.

I think you’re confused about a couple of things that might be somewhat important for you to understand clearly.