Focus variants within one print job

Ok, I am limping along since the broken wheel incident, and a replacement is on its way. HOWEVER I am having a new issue today, and I have to get back up and running ASAP.
Sometimes the machine gets out of focus (or at least I assume that is what is happening). I generally log out, turn off machine, sometimes restart computer etc. and I can get going again. If needed, I also clean lenses etc. Today it did something new. I printed 4 of an identical item in one print job (usually I do 20+, but when I have an issue I go back to printing one at a time until it is resolved). But this is a 1st. Usually it succeeds or fails entirely. (See older runs to the right of the area I am highlighting in the picture). This time I asked it to cut 4. One succeeded (the 1st of the 4) then the other three failed. What is causing this focus/cut issue MID JOB?
ANY THOUGHTS? 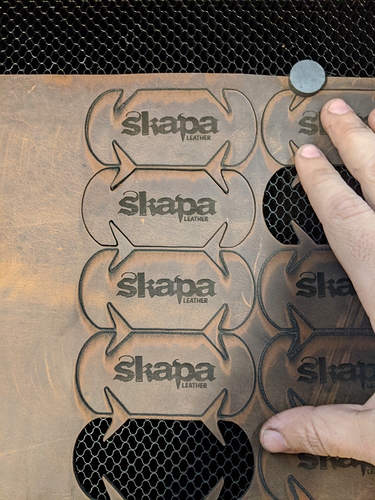 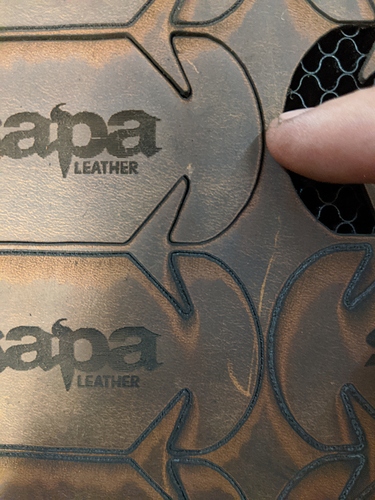 When the head is lower down, the fan is over the magnet? Just a guess. You could try it with a non-magnet hold down & see.

Hides are not exact even thickness all over.

Not normally, but 1st off these have all been skived to the same thickness, and it has never been an issue in patches like this. Also, if you look at the burn line, you can clearly see it is a machine issue, one is sharp and narrow then the others are wide.

Ohhh interesting. You think the magnets I am using to hold down the leather might be adversely affecting the fan on the laser head as it cuts?
Fascinating. I’ll try a diff method now. I have been using them like this for weeks now on this exact same product with limited issues, so I feel like the issue would have shown up earlier… (Again I have had full print jobs of 20 units that have failed to cut through with this wide/fat line vs the thin “razor sharp” line… But never both within the same print job.

You think the magnets I am using to hold down the leather might be adversely affecting the fan on the laser head as it cuts?

No. The whole magnet thing is over-blown. I’ve been using neodymium magnets so strong you can barely get them off the bed if they slip off the material since I owned my machine (2017). The only effect they have appear to possibly have is to interfere with the air assist fan. There were suggestions a change was made to make the machine less sensitive to brief changes in fan speed, which makes sense as I’ve not seen any reports of magnets causing issues in a long time. I have not had issues in over two years.

It looks to me like a material thickness/focus issues, but if you want support (posting here opens a ticket), they can’t help with non-Proofgrade material. Your best bet in that case is to print the Gift of Good Measure on the provided medium Draftboard, and post the results.

Huh. This looks similar to weird focus issues I was having. Watch your machine CLOSELY; mine eventually caught fire because of it!

Thanks. It is a genuine concern! Like I said, I am getting a replacement due to another issue, but in the meantime I need to get limping along. I took a break today so I didn’t throw it out the window… Lol. I will try some other materials tomorrow and see if I can’t find something to work in the meantime. I have never had this focus issue so bad.

I’m so sorry to hear that you’re still running into trouble. I do see that we have a replacement unit on its way, but I’d be happy to see if we can help with this particular issue.

When the trouble occurs, are you utilizing Set Focus, or autofocusing the material height? Does the same behavior occur on alternate materials, or just the leather you’ve been utilizing?

Marc thanks for your input!
A few interesting notes. The most interesting is the inconsistency. I can literally start a print job, and it will tweak out 1/2 way thru the same item. Attached are some photos. I DID FIND SOME MATERIAL TRAPPED IN THE FAN, the larger one on the laser arm. Removing this seems to have made some improvement, the fan was sometimes making some weird noises sometimes and it was also inconsistent in cool down times etc.
So, it is better, but STILL inconsistent. I can cut the same job 5 times and 4 will come out and 1 will be ruined. It’s odd. check out the Skapa logo closeup photo, and you can see where it demonstratively changes engrave mid logo… 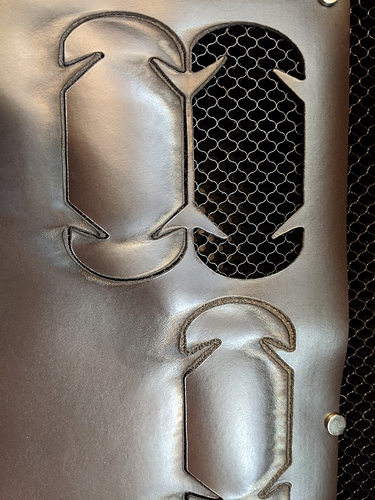 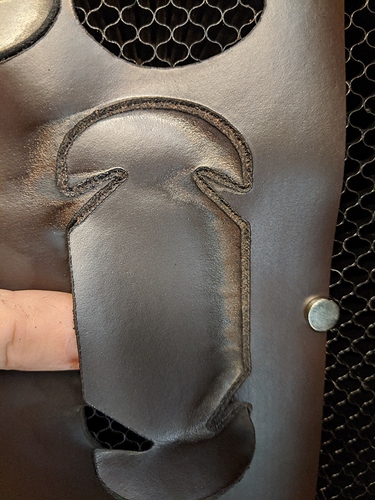 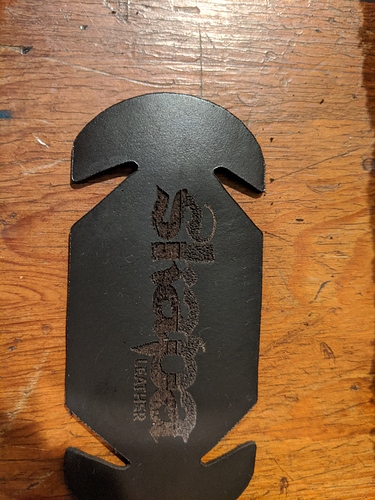 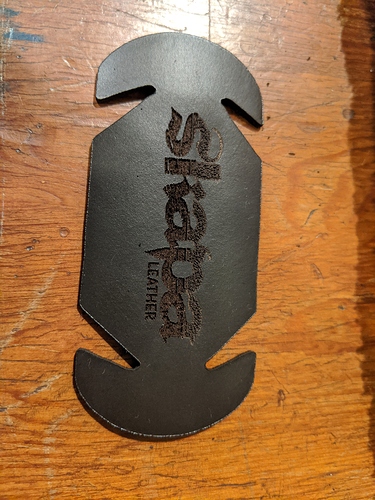 Also, if you look at the burn line, you can clearly see it is a machine issue, one is sharp and narrow then the others are wide.

Not saying that it’s a thickness issue or not, but from the original suggestion @ssincity made, that would be the expected behavior for an uneven material thickness because the beam is hitting the material higher or lower than the focal point.

For example, since autofocus is actually measuring the distance from the head to the material, it measured say .42” to material, but with a thickness variation, or buckled (warped) material, some points will be .48” or .36” away from the head, when the focus is set for .42” from the head/lens, which will lead to an out of focus beam in those areas and reduced cutting capability.

It is not a thickness issue. It is a focus/beam issue. I can measure this leather all over and it is the same thickness.
Also, changing the way the engrave looks 1/2 way thru a job (closeup of logo) with a hard line like that, you can’t tell me there is a magical thickness change in the leather that lined up perfectly down the logo. It’s too precise to be a thickness variation.

Well, there are only so many things you can control. Material thickness is one of them. Some weird flaw with the mechanism that holds the lens in place causing it to go out of focus is probably not. It’s worth double and triple checking the ones that can be fixed, and that experience shows other people have run into.

If the material is indeed perfectly even and perfectly flat, is it possible that the tray is not? Anything that changes the distance between your material and the lens is going to produce results very similar to your pictures.

I was simply explaining further what was mentioned above, since it sounded like you may be unaware of what could cause a focus issue. As I said in the very first sentence, it may or may not be. Just a simple explanation - that is all.

JB, thank you! I didn’t mean to sound defensive. I appreciate your insight.

Chris,
Tray has been removed and cleaned- repeatedly. It is seated correctly. Furthermore, I can get this problem to reproduce when rotating the image. (Occasionally, because all of this is intermittent). So it doesn’t seem to be related to material thickness or position.

No worries! The online support can be a little tough because of how wide the spectrum of knowledge is in how the machine works, as well as getting every last little detail into a support post - so, often suggestions are made that have been already addressed by the end user, but they get rehashed just because no one else knows. It’s often a process of ask and answer to narrow things down.

Support has seen more of this than we have, for sure, and is also more aware of any particular updates that may have been rolled out that could cause the issue so hopefully they can get it pinned down.

Here’s a fun update. I am kind of convinced that the air assist fan is the issue. So, I followed directions to disassemble and clean. I investigated the rest of the machine when I was cleaning and found this. Any idea what this cable goes to and what it controls? 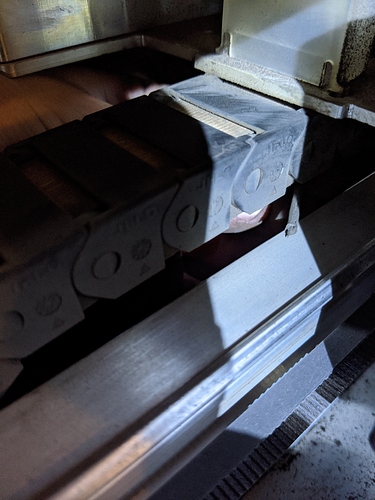 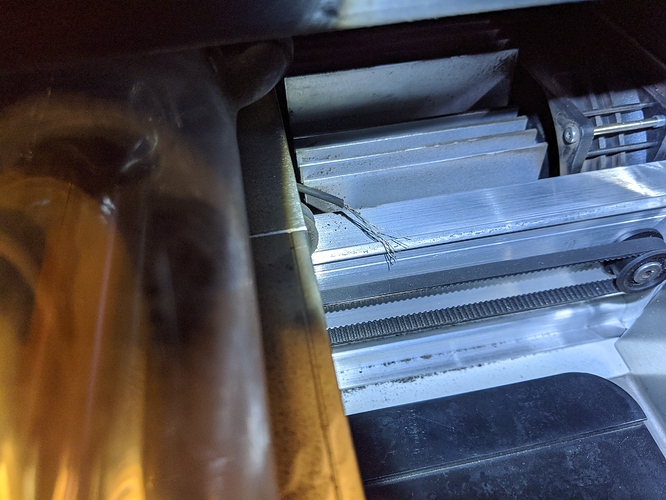 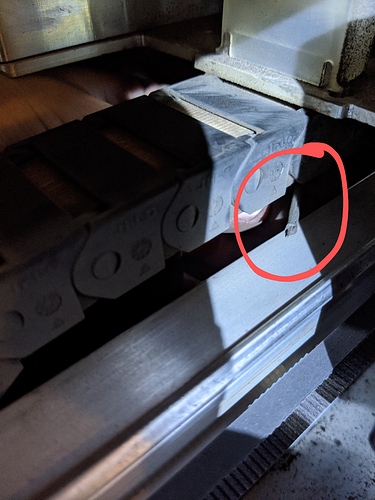 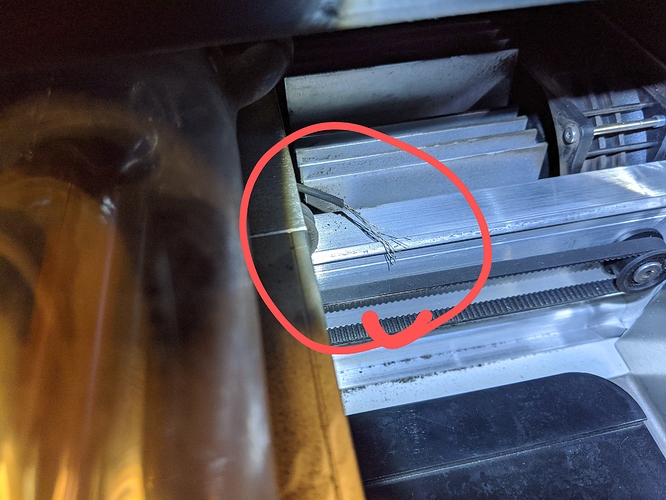 My best guess is that’s this grounding wire: 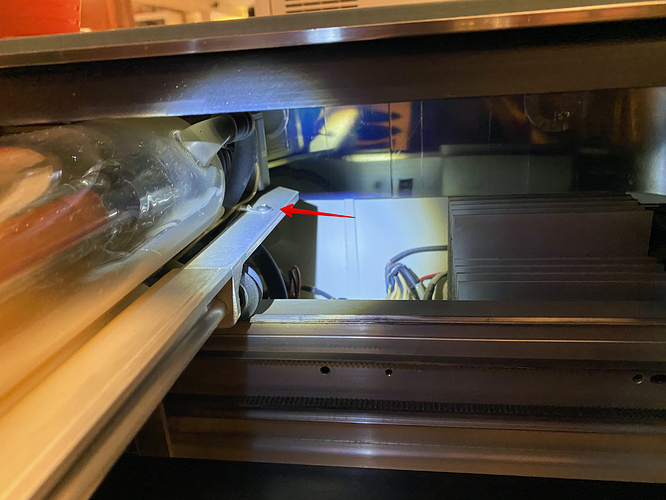 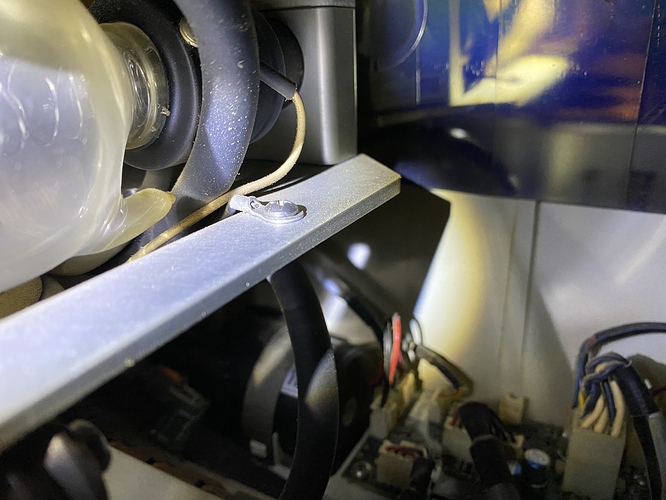 It’s probably important for some electrical reason, but doesn’t carry any data.