For the newest of Noobs

Hey all, I havn’t really posted much, mostly I just click the heart on your posts and bookmark it for when I get my GF. I see that my delivery time is slowly creeping in and it’s time for me to get serious about learning and preparing projects. In disclaimer, I am almost entirely sure this has been covered somewhere on the forums but the threads elude me. Anyways! So I really only have Photoshop, is that fine to do all I need on the GF? I see people using a myriad of programs but I don’t have them. Secondly if photoshop is fine, is there a tutorial on using photoshop and going from start to finish how to do everything that somebody has made? Thanks for the time and patience. I hope to contribute to the awesomeness that everybody is making, at the very least I’ll just keep clicking that heart next to your creations!

I don’t use Photoshop (I use GIMP occasionally, because it’s free), so I can’t help much. BUT…

Sheet1 Glowforge Customer Knowledge Base - Raster Programs Hover over the link and click on the arrow to be taken to the tutorial Raster (Bitmap) Based Drawing Programs,Adobe Photoshop,GIMP,Corel Paintshop Laser Related Basic Reference Tutorials How...

Also, I would suggest checking out the rest of the #glowforge-tips-and-tricks category. There is a handy table of contents.

Lastly, I would recommend spending some time with Inkscape or another vector program. Inkscape is free. I find it very useful for putting cut-lines around images.

Good luck! Come back and ask questions if you have any issues once you get your GF.

Photoshop is great for preparing raster images for engraving, but if you’re ever going to cut something out, you’ll want a vector editor like Inkscape or Adobe Illustrator.

You could eventually make it work, but it’s not the right tool for everything you’ll probably want to do. If you have Photoshop in the sense that you have a full creative cloud subscription, I’d suggest opening Illustrator and going through some of the tutorials for it in the Tips and Tricks section of the forum. If you have a standalone copy of Photoshop, I’d suggest downloading Inkscape (as it is free) and going through those tutorials in the Tips and Tricks section. Inkscape and AI are close enough to each other that if you decide to switch later on you’re learning won’t be a waste.

There are enough free designs around that you can add your own Photoshop images to that I wouldn’t fret a lot about not having any Illustrator/Inkscape/Affinity Designer experience. I’m not saying, don’t learn vector software, I’m saying if you don’t get to it you’ll be fine considering your Photoshop experience. Once your machine arrives and you see for yourself how it works things make a lot more sense.

While I use Adobe Illustrator, I agree that you should use Inkscape. It is well-supported here, powerful and free. You definitely need to learn to use vectors eventually rather than depend on rasters. Rasters engrave and engraving takes a much longer time than vector cuts or scores.

As you get more seasoned, you might look into Fusion 360 (get the non-commercial license for free) for 3D item design. There are web conference tutorials given by an Autodesk employee that will help you to get started when you’re ready.

So, I have this one image, I tried to use Inkscape doing Path>Trace Bitmap>Edge Detection but I think that the file is too much that it freezes it up every time. Is there another way to make this more processor friendly or a stronger program that makes paths? 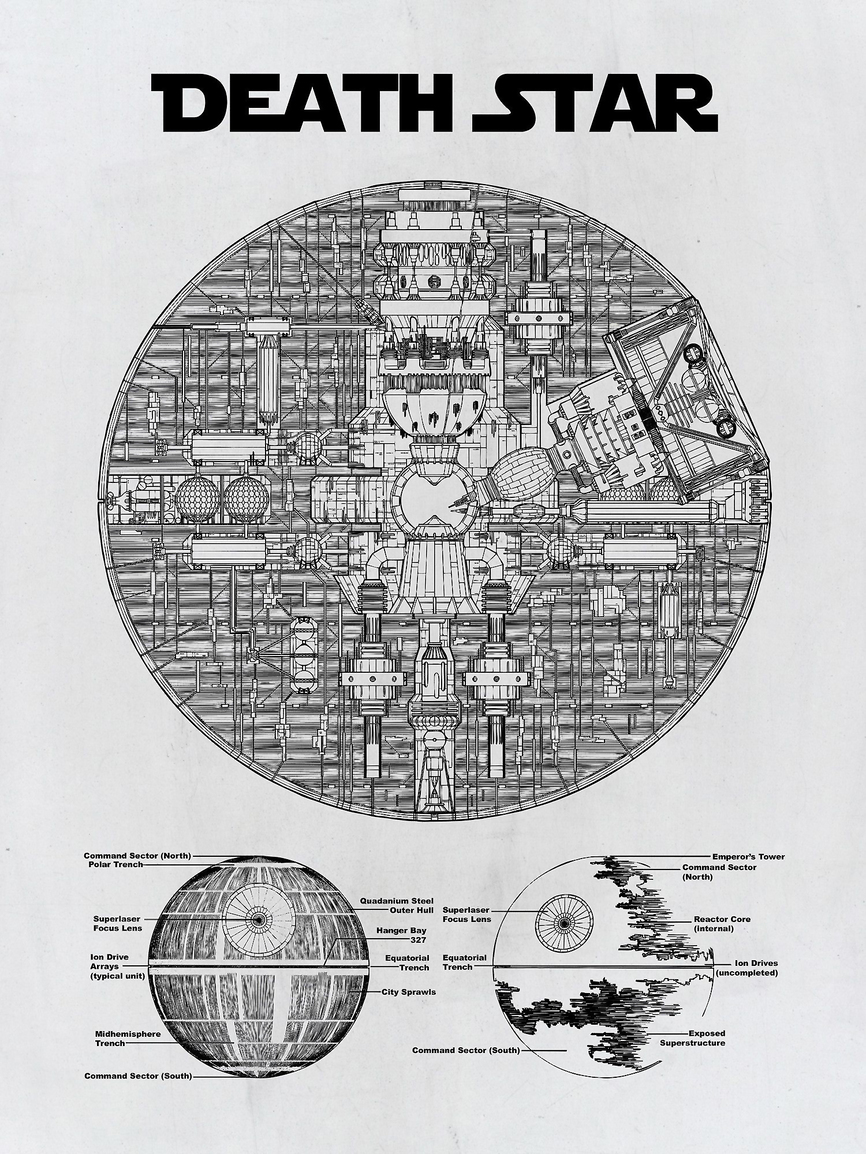 That one would be tough to vectorize. It’s an awful lot of data.

Had you thought about taking it into photoshop and removing the light gray background (you probably don’t want that anyway) and processing it as a raster engrave? (bitmap)

Yeah, I agree with Jules. That’s way too muddy to get a good vector trace and a raster engrave will probably be a better choice. Better off cleaning it up in a photo editing program and making some tone adjustments to get rid of the grey background.

Just for grins, I did just that, because I wanted to see what the new engrave settings would look like, and I am absolutely floored…at the new SD settings, (which it defaults to), you can engrave that whole thing, full bed sized, in about an hour and twenty minutes.

This is HUGE folks! No more crashing large engraves, it looks like they’ve got the new reduced LPI settings optimized for size and speed. 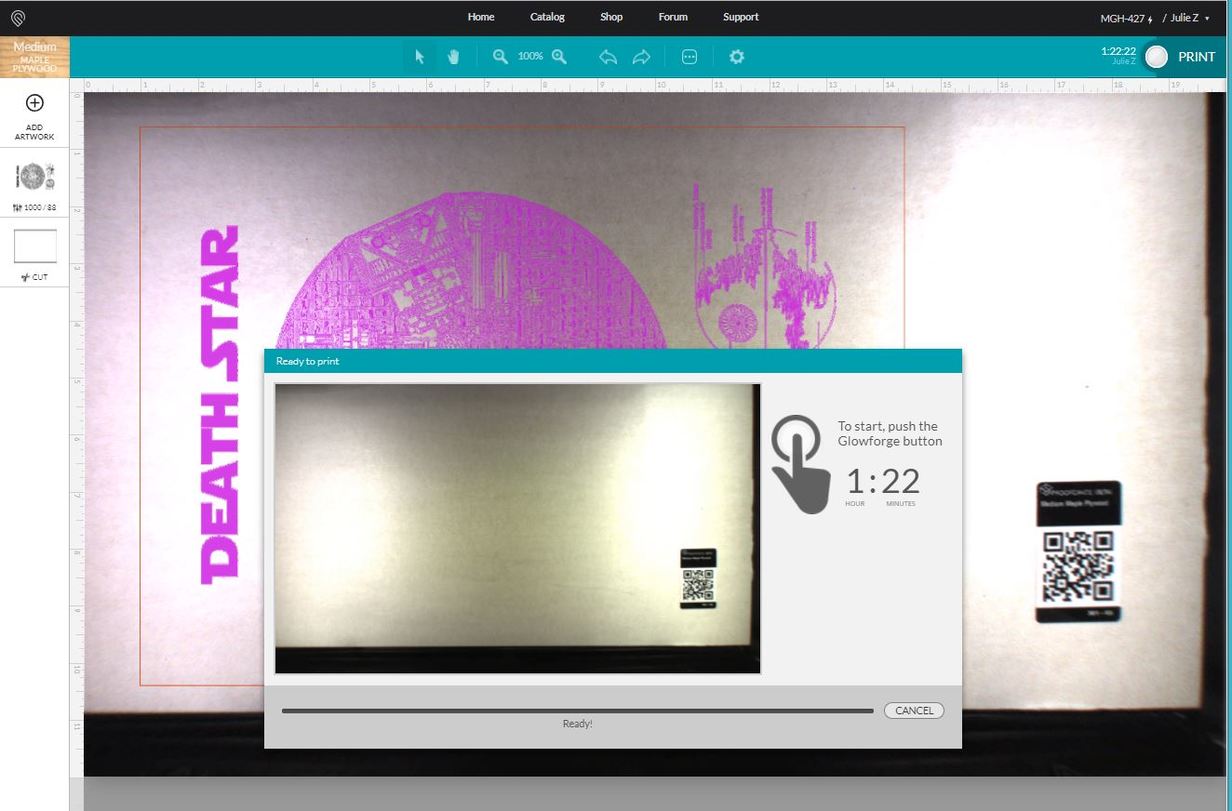 Speaking of that, I had a question I wasn’t sure where to ask, but you might know… With the new settings, it looked like selecting one and then switching to Manual doesn’t give you the default settings as a starting point. I’m worried about losing that ability from the old settings. But I didn’t try much, just noticed. Did I miss something? Will we still be able to start with default settings and tweak from there?

Hey @Jules can you show me how to got it to work? I pick up some of what you guys were saying. I did remove the background but I don’t know how to do the rest of what you said. I’m sure you made a tutorial somewhere, can you link it?

If you’ve removed the background (I’m assuming something like a threshold filter), you should be all set. “Process it as a raster bitmap” just means load the file in the Glowforge app and click engrave. You just need to ensure that the background is either 100% white or transparent, to make sure only the black parts get lasered. Personally I’d save it as a PNG with a transparent background because that makes me feel the most confident that it’s going to do what I want, but a JPEG will work too, as long as the parts you don’t want engraved are white.

Technically speaking you can export SVGs including vector data from Photoshop. While not ideal, it’s possible to create vector shapes and even use a pen path tool. I’ve seen quite a few people that do amazing vector based work inside Photoshop. As everyone else had mentioned, it’s pretty kludgy and Illustrator/Inkscape give you much more control.
Here’s an article from a few years back that talks just about SVG export.

If you do find you want to do all your vector work in Photoshop, Photopea is a free online tool that works well to go PSD to SVG or vice versa. Generates correct fills (color, gradient, pattern), strokes (stroke fill, stroke properties - joins, caps, gaps), some layer styles are also exported. You can include raster layers too.

switching to Manual doesn’t give you the default settings

Sometimes it takes two tries to get it to show the manual settings other than 1000/1. I switch the op back to PG and then back to manual and that appears to do it.

With the new settings, it looked like selecting one and then switching to Manual doesn’t give you the default settings as a starting point.

I only ran that one test, but the major change I noted is in the LPI values…those did change.

I’ll have to look at what else has changed for the rest of the settings…it was pretty late last night when I got that test case done. (Also trying to wrap about a hundred Christmas presents… ROFL!)

We can still tweak settings for sure.

Hey @Jules can you show me how to got it to work? I pick up some of what you guys were saying. I did remove the background but I don’t know how to do the rest of what you said. I’m sure you made a tutorial somewhere, can you link it?

Sure thing - it’s actually discussed in the "tutorial that is no longer necessary"chuckle!…

Just start with the part beginning in Photoshop and go forward, then choose SD Engrave settings for the Engrave.

Here’s the one I worked up if you want to play with it and see how it breaks out:
death star.zip (3.4 MB)

Sometimes it takes two tries to get it to show the manual settings other than 1000/1.

Have you seen a case where using

two different engrave operations have different settings when you switch to manual? I saw that this weekend on a file with three different engraves. One was not like the other. All were set to graphic. I’m hoping the defaults changed because of the underlying engrave and not just because.

I only see 1000/full power for new “draft” and “SD” graphic settings. HD graphic seems to be showing me actual settings.

Those 1000/full settings for SD and Draft appear to be correct. The LPI for each is different. I engraved using the Draft setting and the 1000/full manual settings and the engraves came out identical.

Looks like for Draft and SD the company was prioritizing speed over resolution.