Glowforge Accessories I Would Love to Have

If they throw in a 4th dimension, I would pay $100,000. That way, I can go back in time, after my prints, and not purchase the laser, but still have all my money and my print in hand! Seems like a win-win.

This is a long shot, but a 45 deg or somewhere in that range angled beam head + rotary device. I know you cant fit stuff under the head, but you can fit it out in front of it!

So many good things for the hopper in here!

Many of which were already on our todo list - but it’s great to hear what people are most excited about for when we have time to do it.

Additional bed types. Pin beds are almost a necessity for cutting acrylic. Blade beds are a great middle ground. I can make those, but if you sell an official one, id prefer to have that as a quick swap option.

Did you see the spring clamp bed design on the K40 G+ page? Effectively you’re taking a pair of those stupid bed clamps the K40 comes with on their side so you’re clamping in the vertical direction instead of horizontal. Would one fit where the crumb tray is? The design even allows for trayless use that would prevent all flashback from pins or blades or honeycomb. It would be a non-damaging addition to the GF so shouldn’t affect the warranty.

Wow I didnt catch that! Its pretty genius! Super cheap solution if you cant get a motorized bed, or if you want to avoid flashback!

Thanks for letting me know! The GF tray can be disassmbled pretty easily. We might be able to make some swappable bed types for it.

Yep. Made one for my K40. I do a lot of work with full sheet goods (full in terms of what the K40 can take). Way easier than the lab table z-bed I had.

When I’m not doing full sheets I put a shim under each frame edge so it depresses the bed the right distance. I have strips of 1/8 and 1/4" BB, chipboard, and acrylic so it’s quick even for small pieces of scrap that I’m using.

kept reading too much and came across this hahaha

im gonna have to make one… Just got my cohesion 3d board in last night too! fun times ahead!

Let me know if you think you could use it in the GF once you make it for the 40. Might give you the capacity for more than a 2" thick piece of material in your pre-release. I mounted mine on a flat steel plate for a base so it’s easy to move between machines.

Im going to add a ‘home square’ to this list. An L shaped device with 3 markers on each corner which will allow the glowforge to treat that as 0,0 and will allow you to manually input location based on that for more accurate cuts. Super long shot. Still adding to the list lol

I’ve been using these with magnets in the base. 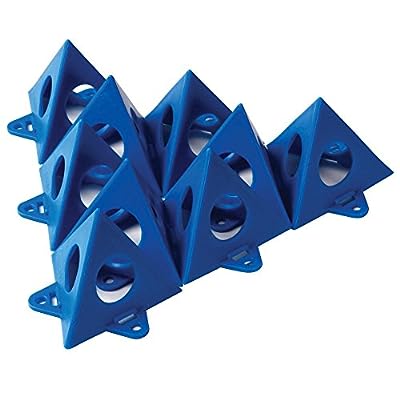 Painter's Pyramids work much like a board studded with nails, but unlike nailboards, they can be rearranged quickly for various projects, they won't leave prick marks in the surface, and they nest int ...

For light stuff I sanded a couple flat and glued magnets to the top. Then place magnets on the top of the material. This does not obviously work on things like paper.

Aye! Nice! I have a pile of those around I can definitely use. Gotta make sure they arent toxic first I guess haha

An L shaped device with 3 markers on each corner which will allow the glowforge to treat that as 0,0 and will allow you to manually input location based on that for more accurate cuts.

I love this idea. Definitely in the hopper.

It would also make double sided cutting trivial because if you flip a part keeping the same corner in the L it is perfectly aligned, even if the edges are not vertical (as long as the L is taller). This is basically how I plan to mill double sided PCBs.

For rectangular sheets too long to rotate you would need to move the L to the diagonally opposite corner of the bed.

I would prefer to be able to cut my own jig and engrave the fiducials.
There are lots of non-rectangular things that would benefit from this!

A ‘home square’. An L shaped device with 3 markers on each corner which will allow the glowforge to treat that as 0,0 and will allow you to manually input location based on that for more accurate cuts.

I’ve made this item and it works great, but what would be the “3 markers on each corner”?

Well I’ve created a fiducial ruler that I’ve shared here which was born of this concept. The Glowforge team, however, was able to make it work with 2 markers instead of 3.

And here’s a link to @takitus’ ruler if you’d like to try it:

Its been a long time coming, and I have been waiting for this for years, so I am incredibly excited to share my Fiducial Alignment Ruler with you guys! –> original concept post: (XY home position) As most of you are aware, snapmarks were just released and are INCREDIBLY helpful in getting everything aligned perfectly. The one downside that has bothered me since the beginning, is that you ALWAYS have to make a jig for everything. NO LONGER. ONE JIG TO RULE THEM ALL! [image] So many times I…