@takitus, one correction: I didn’t state that any of the “margin of error in homing” examples besides getting “crumbs” stuck in the door, and said we’d add handling for that too.

Ah, Im sorry if it was implied that those points were from the horse’s mouth, and also now that you are a horse (or robot alien haha). These were things I was just listing that came to mind that could potentially cause the camera to not be in the same place/orientation as it usually is. If you guys have that taken care of as well thats great news!

I was having flashbacks to old laptop screen hinges that had lost their rigidity causing the screen to flop around. I had to make a kickstand for a customer once hahaha

people have many unspoken assumptions in their questions (for example, that the laser starts at a position called 0,0 which is in the upper left corner of the bed) that are not true of the Glowforge

As im sure you know, many lasers allow you define 0,0/home to be different locations, like in each corner. Usually for the sake of being able to take advantage of that physical guide to know you are cutting where you need to be. Most people use the top left because of gantry orientation, and mirror placement, and because most lasers set that as default, but it doesnt have to be. I think the main concern is being able to align an absolute physical location on the bed to one in the software consistently and dead on accurately. But also being able to say ‘I need this whatever cut exactly 5mm from the top edge and 12mm from the left edge’.

also:
How does the glowforge homing work? Is 0,0 by default under the middle of the camera? Ive seen the head move back to the top left after a cut is finished. Is that a specific amount of mms/steps you have pre-programmed in from the center ‘home’ position?

There is no user-facing coordinate system, nor means to enter coordinates, in the UI right now.

It’s very helpful for us to understand exactly what things folks want to do so that our hopper entry for this gives maximum flexibility & ease of use. In general, our team prioritizes a bunch of projects that a bunch of people want to do that are hard/impossible under our current software quite highly, if that is indeed the case. If it’s actually easy to do what people are asking, but we haven’t explained how, that’s good to know too.

I think one of the points of confusion here has to do with the assumption that there is a fixed relationship between the drawing space and the bed space.

In other words that the drawing has an x,y zero point, and that once imported that point maps to some specific x,y point in the drawing interface (i.e. on the bed image), which then maps to a similar point in the physical machine.

Perhaps @dan (or @Tony) could explain how the drawing is imported (the first time) and a little bit about how the interface decides where to place it on the bed image.

Specific questions given an empty drawing with units in inches:

The use case for this information is to understand how we can, for instance, engrave repeatedly on objects which have existing pre-printed text. I do understand there are ways to do this, I even described one already, but I think the thought experiment would answer the underlying question.

I’m actually going to defer this one to @tony because I’m phone bound right now and can’t check.

So I decided to draw up a visual guide. Something like this would be incredibly helpful. Basically its an L shaped ruler/square with 3 registration points. If the glowforge could read those points it would know exactly where it sits in the bed, and its orientation, and where the corner is that we can align objects against. Then if we can enter an offset against that corner location for our cut to be made, it would give us the desired accuracy.

For example in the drawing below I want to cut the 2 black holes in the template (pink box) ive made on my CNC machine. I know that they need to be 60mm from the top of the piece, and 4mm/30mm from the left. I know that the top corner of the material is now aligned with the homing ruler and glowforge now considers the top left inside corner of that 0,0.

I load a circle svg into the UI and tell it to move the top left corner of that svg down 60m and left 4mm from the 0,0 point glowforge has ‘generated’ based on the location of the homing ruler. then im good to go. Rinse and repeat for the next hole 30mm over. 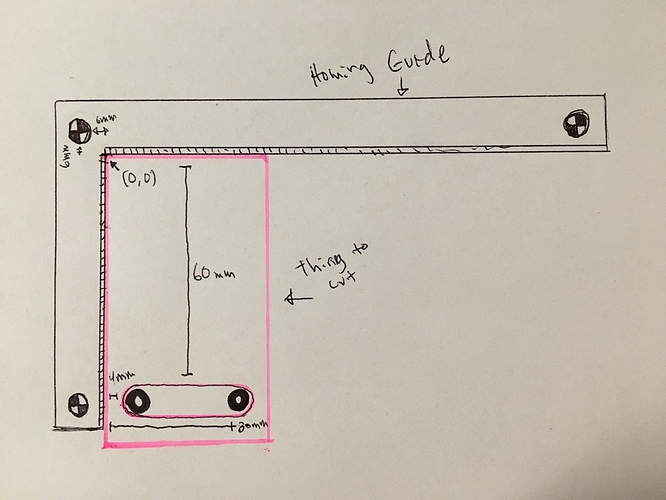 This was what I was describing before. A moveable L shaped “tool” with the 3 registration points. Thanks for drawing it up so nicely. This should be mostly a software thing, but something would have to be done about how to make the precise hardware piece that the GF would recognize.

Thanks @takitus and @julybighouse !
That is very clever and probably solves most if not all of these issues!
Given that the Glowforge can cut the template and engrave the fiducial marks we could make templates of any shape and those three points would align them repeatably.

In the mean time (i.e. until that makes it out of the hopper) I would still love to hear how the default positioning works. If it is repeatable we could have the template in the drawing and use a jig that registers against the machine (as described way above).

In addition to the Registration of pre-printed sheets thread, here’s another thread about how useful being able to align to registration marks would be useful…

I've been making papercraft models on my laser cutter at home. It's a bit of an awkward 2 part process where I have to split the raster images from the vectors and then realign the two inside the machine. I've written an instructable about how to do...

And for ease, another link to…

One of the things I hope to do is cut buildings for games and railway modellers. Since these would be cut from pre printed sheets the registration for cutting will be crucial So, just a plea that the software will allow very precise movement and...

default positioning? I don’t think that would be needed. The intersection of the two arms make the initial 0,0 point, the arms would just tell the software the specific rotational orientation of the piece.

So you should be able to literally drop this piece on the tray, snug up your piece in between the arms, and go from there. If you are off by 1,2, or 85 degrees, it shouldn’t matter, the three registration points would tell the software the orientation of the piece and the software should be able to make the adjustments.

Yes, once they write the software to do that. Using the default drawing import 0,0 point is a work around until that (fairly complex) software is written/tested/deployed.

…plus there are other users with different needs that might not want the added complexity of “3-point what now?”

I think its going to be very similar to the flip-over cut functionality they planned on having anyways… so I dont think it would be too much trouble to implement.

It occurs to me that this whole requirement for a known origin is generally being demanded by people that have used CNC machines before.
I totally get the need for consistently placing objects and having your file consistently placed over them, but I honestly think we are selling the Glowforge team short by assuming they have irreversibly failed at delivering that, and need to implement a whole new alignment system, before the machine has even been shipped. Dan has stated repeatedly that they have gone out of their way to make sure that we will not need to interact with the Glowforge the same way we would have with other CNC machines, and that is in fact one of its biggest selling points, yet people are essentially demanding that they can use a workflow with the Glowforge that was required for those other more difficult to use CNC machines.
All the Glowforge really needs to do the same as the CNC machines that came before it is to be extremely accurate and consistent, and I’m pretty sure they’re not going out of their way to make it either inaccurate or inconsistent.
The way I see it, all that is needed to fulfill the use cases stated herein are for following two statements to be true:

Item 1 it’s pretty much on us. The bed area is a physical space with some hard edges, so we should be able to figure out how to put our material or jig in the same place every time.
Item 2 is on the Glowforge team, and that requires two things:

Glowforge has camera so you should just be able to drop your work in, align it once manually and then drop in another identical piece and have it automatically align to that, preserving the same offset from two edges. I don’t see why you need jigs with fiducials.

I do have a an L shaped jig on my CNC and it is screwed down into screw holes drilled by CNC, so I have run thousands of jobs from that. But my CNC doesn’t have cameras, it does have limit switches though.

If I cannot use a laser with the degree of accuracy it is capable of, its pretty much just a toy to me. I cant really justify spending that much money on a toy.

It IS capable of cutting things with incredible accuracy, they just need to find the best way to accomplish that. Weve dropped a few viable ideas on them that I dont think would be too hard to implement, especially considering the work will overlap with stuff already promised.

I have faith they can make something that will work for the not-so-picky crew, as well as the super picky crew that I was basically born into by way of two incredibly science-oriented parents hahaha

dan said the margin of error by using the camera is in the mm range. I cant work with that =\

Neither can pass through or double sided cutting, so they need to improve that. The head cam should be able to get an accurate fix on an edge.

dan said the margin of error by using the camera is in the mm range. I cant work with that =\

thats the one gotcha for a permanently attached L guide in the glowforge, is the passthrough. Its going to have to be removable so you can make full use of the bed. after removal youll want to know that you have got it back in place and perfectly aligned with the GFs 0,0 location. if it werent for the fact that all that stuff has to be removed sometimes I dont think we would have this predicament