I’m hoping someone here can help me. I’ve been trying to print a puzzle (Basswood with standard glue and photo paper) on the glowforge and no matter what setting I try, im getting yellowing / burning. My friend has tried the exact same settings on their glowforge and it is working perfectly. I’m wondering if there is something defective about my glowforge but everything seems fine.

Things I’ve Tried:
• Ive tried adjusting the speed faster so it doesnt burn as much. Even if i increase speed to the level where it barely cuts through the wood, I get yellowing. Which at the exact same settings on another glowforge doesnt happen.

Any ideas on how I can get rid of this yellowing? Could it be a power or focus height setting? Any ideas would be super helpful

Are you positive your lens is in right side up? The bowl side goes up.

Can you share a photo of the discoloration? Are you using the set focus tool? 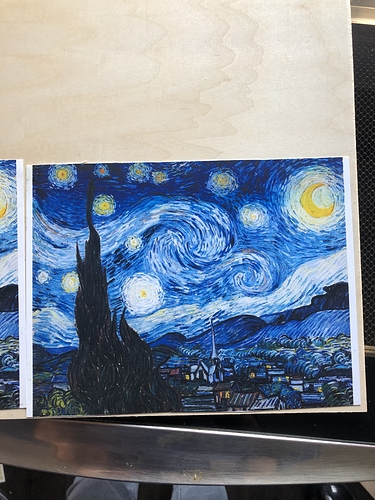 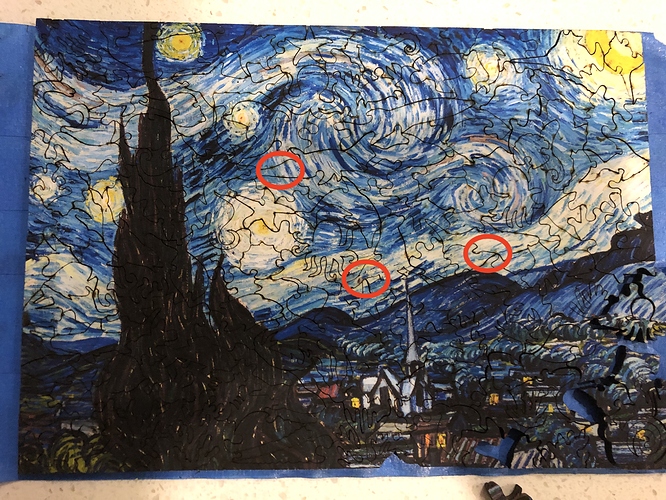 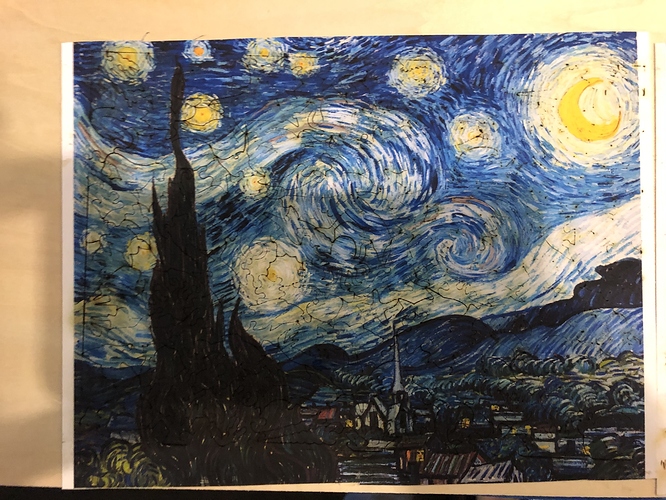 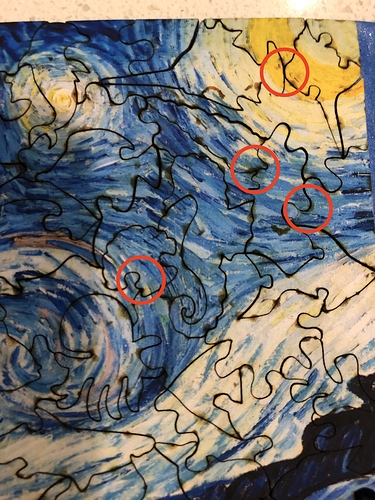 But I’ve never changed it after installation and I just got my glowforge recently. Is it possible i installed it wrong? I thought there was only one way to install the lense box? I could totally be wrong though, love your thoughts!

Uploaded, your insights would be greatly appreciated! I’m struggling to figure out what im doing wrong or if it is an issue with the machine itself?

The laser is literally burning things. Smoke deposits on the surface and you get discoloration. Unlikely it will help, but try speeding it up significantly and use 2 passes. It should avoid the charring on the photo paper at least.

Thanks @kanati - Makes sense, do you have a recommendation on speed maybe like 300 with 2 passes? Any idea why the exact same setting works in another glowforge? I’m wondering if theres something wrong with mine.

Your svg might be faulty. It’s hard to know but if the paths are overlapping it could cause significant overburn.

You can also seal it first and then wipe it off after.

You might be able to mask. @jbmanning5 had a great trick for masking puzzles, maybe he’ll appear with the link.

The lens I’m referring to is the one you need that blue removal tool for. If it’s in upside down you will get wide lines and lots of charring.

@beerfaced is it possible the lens is upside down when it was shipped to me? I think it came pre installed and all i did was attach it to the arm in the machine.

That would be me amazing!!! I think the SVG is fine because i made a friend try it on another glowforge and it was perfect. Shouldnt be any overlapping lines. But I would love to learn more about masking if you’re open to sharing your tips @jbmanning5

Hmm let’s see if I can search it down.

How To: Weed a Puzzle Like A Boss Glowforge Tips and Tricks

Sore thumbs? Hours wasted? Weeding hundreds of pieces one at a time? File set up: Rows - Any color Columns - Any color but the color used for rows Steps: Mask Pin down Cut rows [image] Pull all masking off Remask [image] I hate all of that excess masking, so I trim it. [image] Cut columns [image] Enjoy! [image] [image] [image]

Might not work for your irregular pieces but there you go.

Is it possible I have a defective lens, theres a decent bit of scratches on mine and I have only had it for a few days. 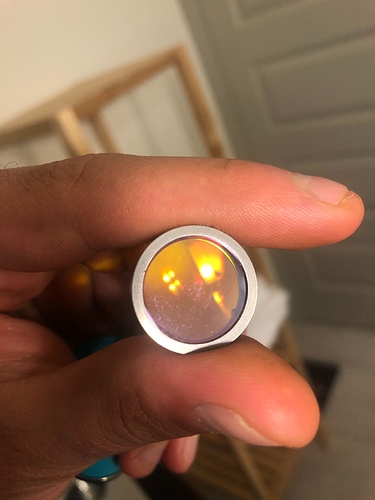 It’s very easy to check. Pull it out and have a look.
Oops, I see you already did that.

Have you tried cleaning it with a zeiss wipe?

@beerfaced - I have it seems to be part of the lens itself? It only appears at a certain angle. Could this be the issue with the burning dots in my puzzle i wonder. Hmmm…

It’s highly unlikely to be related to the lens. The last photo in your post is probably the most indicative of the problem – notice how there is burning/scorching in both tight turns and almost straight lines?

If only the tight curves were burned, that would suggest a speed issue, but the fact that nodes along the straight(er) lines are also cooked could be an indication that the svg has a lot of nodes defined along each segment. I don’t know the command in Inkscape offhand, but there should be a way to “simplify paths,” reducing the number of nodes to the minimum needed for your design.

Any idea why the exact same setting works in another glowforge?

Is your friend’s GF the same model as yours? (Pro, Plus or Basic) The Pros and the early Pluses have a higher powered tube so the power settings behave differently than the Basics.

Thanks @dwardio , its strange because I’ve tried the exact same SVG with another glowforge and works perfectly. Will give this a shot though, definitely good idea!

@ekla - Exact same model Pro, with exact same specs and material (down to the same printer)

. I’m not sure what it could be