Here are the two boxes on top of each other in the UI. 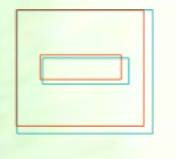 Here are the two SVG files,you can see the boxes are the same size in both (the outer box is 12.849 mm x 11.679 mm). File 2 was originally a DXF exported from fusion 360 and then “saved as” an SVG. However, I then copy/pasted the box from file 1 into file 2 and deleted what was in file 2 and glowforge is still sizing file 2 incorrectly.

I don’t have illustrator - can someone confirm that the boxes show as the same size in illustrator? Perhaps that will help show if this is an inkscape issue or a Glowforge issue.

It isn’t a Glowforge issue, the boxes are different in Illustrator.

Can you post a picture of the SVG export settings that you’re using? One of the Inkscape users can walk you through, also check The Matrix in Tips and Tricks.

No, they do not open as the same size in Illustrator.

Interesting. Here is a screenshot of the two boxes in inkscape showing they are the same size:

@Jules Yes, that is set for both. I’ve also measured using the pen tool and snapping.

Same version of Inkscape used to create both files?

It’s also interesting that illustrator shows the Fusion Hole Test.svg as larger when glowforge renders that one as smaller after importing both.

That has to do with the dpi used for import in Illustrator versus what is used in Inkscape versions. (I think.)

Illustrator imports at 72 dpi. Inkscape, depending on the version used, imports at either 90 or 96 dpi. Currently 96 I believe. So when you open a DXF file or SVG in some other program than the one it was created in, it wreaks havoc with the sizing. DXF files (created in Fusion) don’t have units associated with them. So you have to specify that when you open the file in whatever program you are using (like Inkscape). And the GFUI assumes that what it is getting is 96 dpi, unless it can identify the source of the SVG file. (Like Inkscape versus Illustrator.)

Let me dig around a little, there has to be a place where that is specified in Inkscape, but that’s not my main program…I’m not sure where to go to find it.

I’m not the best for interpreting the SVG code, but looking at the two files side by side there are major differences. 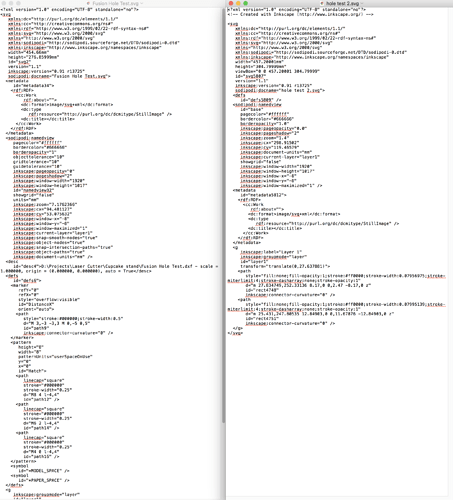 @Jules Consider that Hole Test 2 showed the exact same size in illustrator and inkscape and was correct in glowforge. So if illustrator’s import caused the difference you would think it would do it to that file too.

The issue here is that the fusion file was simply created by exporting a DXF from fusion and saving as SVG from inkscape. This issue may mean that anyone following that workflow will get incorrectly sized files when they cut. The work around was to open a new SVG and copy/paste the contents into it.

There is something in the fusion SVG file that glowforge - and perhaps illustrator - are interpreting differently. Perhaps some transform or something that inkscape is using to get the dimensions in the two files to match but glowforge is not. I looked at the SVG source files but nothing like that jumped out at me at first glance.

Yep. This is going to require some serious thought. It’s a mess.

Did you actually print the results of each of the files and physically measure them to see which one came out to the correct size?

@Jules yes, the glowforge UI shows what it is going to cut. The “fusion” svg is smaller in the UI and cut too small, the “hole test 2” svg cut the expected size.

Okay good. How did you create Hole Test 2? Was it created directly in Inkscape?

@Jules Hole Test 2 was created in inkscape. Fusion.svg was a DXF exported from fusion - after it was cutting too small I wanted to narrow down the problem. So I deleted all the geometry generated by fusion, copied the box from hole test 2 into that file and saved it. That is what I’ve uploaded. So both files have the same box.

Using inkscape - you can draw a box in hole test 2, copy it to fusion.svg and they will show up different sizes in the glowforge UI.

do you mean that you are dragging and dropping the new file into the open Fusion.svg on the app? Or are you using the copy paste from Inkscape? (I can’t test that in Illustrator, my version doesn’t support it.)

Copy/paste. But it would be the same if you drew the box directly in fusion.svg. As far as I can tell anything in that file will show up in the glowforge UI smaller than it shows in inkscape.

At this point all we’re doing is trying to pinpoint where the issue lies. Sounds like it might be in the copy/paste from Inkscape function.

If you would be up for a small test, I’d be interested in seeing if dragging and dropping the Hole Test 2 file onto the open Fusion file had the same effect with the resizing.

I’m going to play with it a little bit later this afternoon to see if a “Eureka” moment happens, but it does look like it might be a bug in the Copy/Paste function for Inkscape, which I’ve never used. (Fortunately the team who wrote this is a lot smarter than I am…they can probably find it a lot faster. They know what they’re doing…I just poke around.)

It’s not the copy paste. The issue was there before I copy/pasted anything - my cuts were coming out too small. I created a new file and copy/pasted to make the two files identical so that I could post the issue to this forum in a way that would clearly show the difference between the two files.

In fact you can use copy/paste to work around the problem. If you copy geometry from the fusion generated file into a new inkscape file it works fine.

Okay, let me make sure I completely understand this time…the actual issue is that the file you converted from Fusion 360 using Inkscape came out incorrectly sized? Too small?