Glowforge not cutting through materials after replacing Crumb Tray

My Glowforge is still not cutting through materials. I have been unable to cut through PG materials since I’ve had it, now going on 2 weeks. I posted my original problem here:

After troubleshooting with support and posting to the community forum, we determined that I had a warped crumb tray that could be causing an issue. I was provided with a replacement crumb tray, which arrived today (10/12). I confirmed the new crumb tray is perfectly flat and level.

Unfortunately, but not surprisingly (since I tried other tests) I am still having the same issue. The GlowForge is not cutting through the ProofGrade Medium Draft Board when attempting to print the Gift of Good Measure. My latest attempt was Friday, 10/12 at 1:20 PM. A second attempt was made immediately following, at 1:30 or so. I also noticed that in both attempts, when it got to the "Score" part, the laser did not fire at all. I checked that the Score was not set to ignore in the GF UI. I also observed that the engraving is significantly lighter than what I had done previously with the old crumb tray. 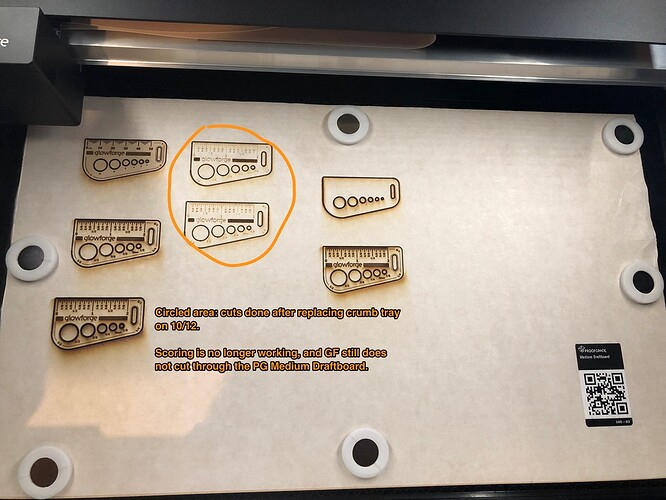 Additionally, my Glowforge is not recognizing Proofgrade material, despite the QR code being visible. I have to manually set it in the GFUI.

I have attached a picture that shows PG Medium Draftboard secured to the bed using neodymium magnets, so there is no warping of the wood. As you can see, I’ve tried multiple tests and none of them have worked.

What I have done so far to troubleshoot:

Problems cutting through materials all the way Beyond the Manual

Despite all my attempts of troubleshooting, and getting the new crumb tray, I haven’t had any luck cutting through materials, PG or otherwise. There is another thread where you can see some of my detailed troubleshooting while I was waiting on the crumb tray. @jbmanning5 suggested that I print multiple lines to test if the laser is cutting at different focal lengths. When I did that test, it appears that all the lines were the same depth, and out of focus. It seems that my laser isn’t focusing properly.

Please let me know what my next steps are. It is very disappointing that I still don’t have a working unit after several weeks of troubleshooting and wasting materials. It actually appears that my GF is now worse than what it was last week when I was troubleshooting the problems.

Does anyone know how to get a hold of support besides email and the forum? I’ve been waiting 2 weeks to get my unit working. I would really like to escalate, but from what I can tell there is no way to do that.

No, I know of no way to accelerate the process beyond what you’ve done. By posting it here, they will address it, and unfortunately with one small caveat, anything else that you can do will be make-work until they do respond.

The caveat: It might help to go into a little more detail about how it is currently not cutting through…is it almost complete? Or does the cut extend only partially through the draftboard?

It might also help to show a picture of the back of that sheet of draftboard - it helps them to see how far off it is.

Other than that, they are going to look at the metrics for your machine at the times that you specified above, and they will be able to discern more than we can from that. So it’s just a waiting game at this point.

(They’ll fix whatever needs fixing, but it can take some time to run through all the testing…hang in there.)

As far as more details go on the cut, there is nothing to show- the back of the draftboard is completely blank, as if nothing even made it close to cutting through (because it didn’t). This has been the case since the first time I cut, and is still the case now. I’m guessing the depth of the cut is maybe 1-1.5 mm.

Oh yikes. That’s a bummer. (Okay, well, you’re gonna have to hear from them.)

Thanks for reaching out again. I’m so sorry to hear the new Crumb Tray didn’t solve it.

Unfortunately, it looks like your unit is experiencing an issue that we can’t resolve remotely. I want you to have a reliable unit, so I’m recommending we replace or repair this one. I’ll be in touch via email to sort out the details. I’m so sorry about the bad news.