Hi Everyone! I know I’ve been quiet lately, but this piece took a bit. Decided to do something Harry Potter themed, and thought what better way to display it than to view it through the Mirror of Erised. I tried to capture as many elements of the saga as I could figure out how to make. I did install lighting, I used a battery power string of 25 fairy lights (the kind on the bendy wire) and embedded them in the inner roof line and a few in an empty space behind the stained glass, with a piece of parchment behind to diffuse the light. 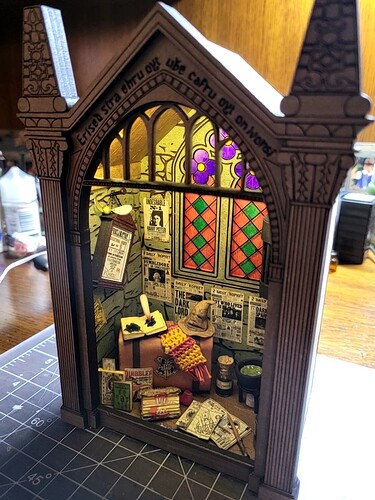 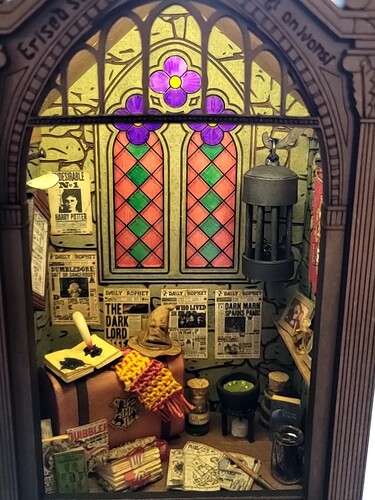 Allow me to take you on the Grand Tour! On the floor, we have a Hogwarts trunk, Gryffindor scarf, the Sorting Hat, Tom Riddle’s diary stabbed with the Basilisk fang, Gildoroy Lockhart’s book (with Platform 9/3 ticket as a bookmark), the Herbology handbook, the Monster Book of Monsters, a few issues of The Quibbler, The Maurauders Map, Harry’s Wand, the Philosopher’s Stone, a jar of Gillyweed, a brewing pot of Polyjuice potion and a mug, the Advanced Potions text book, and an empty jar of Devil’s Snare seeds. Oh, and a few of the trading cards from the chocolate frogs (Harry and Dumbledore, specifically, but can’t really see them too well with the angles, in front of the MBoB on the floor). 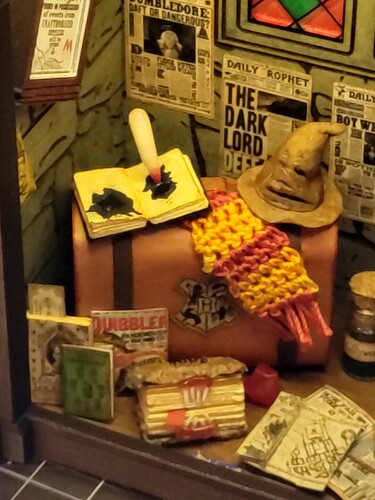 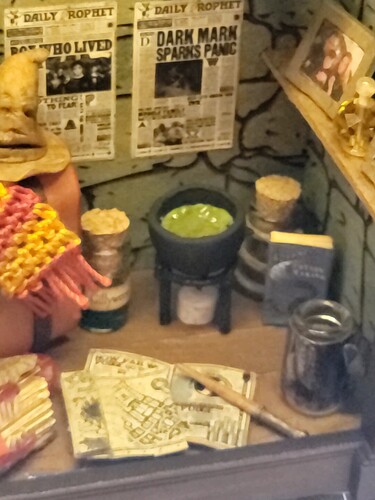 On the left wall, we have a flyer for Fred and George’s Skiving Snackboxes, alongside a broken and battered Proclomation No 9 (banning sweets from unauthorized suppliers), with the Golden Snitch perched playfully on it’s corner. 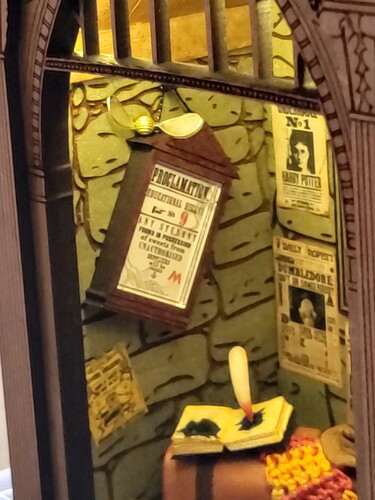 The right wall has a purposely and tragically empty cage (

), a Gryffindor banner, and a mantle with photos of James and Lilly Potter, and a bottle of Felix Felices. If I’d have planned that better, I would have put a fireplace there. Oh well, next time. 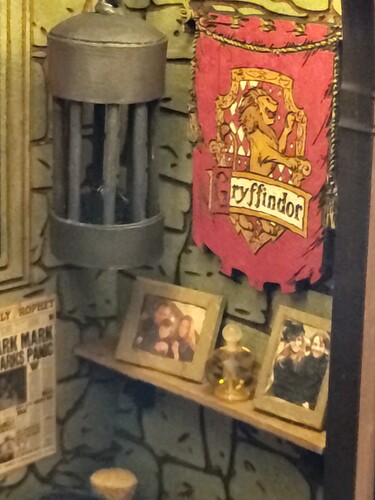 I used the GF to engrave and cut the mirror frame layers, side and back walls, the hook for the cage, the banner, the proclamation, braces for the shelf, and windows, from medium PG Draftboard and medium clear acrylic. The rest is chipboard, cardstock, clay, hot glue, toothpicks, printable stuff, etc. The battery pack is external with about 3 inches of cord so it’s accessible for changing batteries, it pressure fits in to a space cut in the back two layers. The lights themselves had this extra ‘Try Me’ button wired to it and I was going to cut it off, but I kind of like having it accessible for just a quick 10 second peek, but it is a separate button battery. 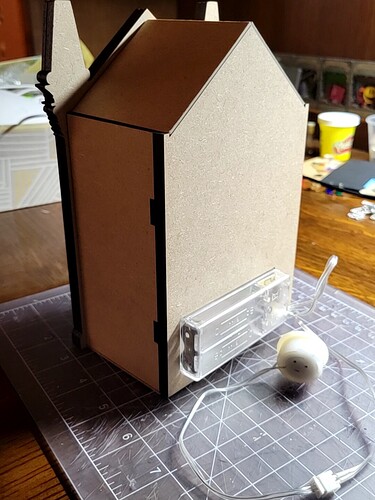 Thank you for stopping and taking a look, and until next creation, Happy Forging!

Your work is beautiful. Thanks for taking the time to share your piece with us.

An amazing piece, thanks for the tour and for sharing. I love your miniatures creativity.

Fantastic! All the details are just

Holy smokes! This is sweet!

Epic, as always! Your creations are getting increasingly elaborate and of course always adorable. I look for the Odzicari Museum to open at some point.

Is the intent to put two-way mirror on the front so that it looks like a normal mirror until the light is turned on?

Thoughtfully planned and beautifully executed. Thanks for the inventory. I would have missed some of the details. The lights really dial it up.

Wow, there’s a lot of great detail in this! Wonderful work!

Is the intent to put two-way mirror on the front so that it looks like a normal mirror until the light is turned on?

I thought about that, and it would be cool, but I don’t know enough about glass cutting and I couldn’t quite think of how to make the same effect using a piece of acrylic. I thought about trying a thin coat of silver paint on clear acrylic, but didn’t put in the testing effort.

There is two way acrylic mirror: 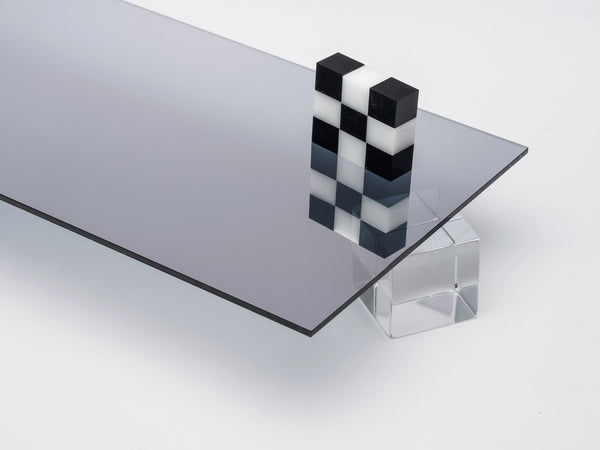 Canal Plastics Center offers plastics and fabrication services with a specialty in hard to find acrylic colors and small-scale projects for both industry and individuals.

…Among other places to get it.
@shogun has done a few projects with it.

It would be hard to top one of your creations. Somehow you always do! Thank you for the write-up.

You just take our breath away - outstanding!

Oh. My. Stars. Something new for me to spend money on! (as if I really needed any help with that). But, Santa needs a list from me, too

Very nice. Where did you get all the little objects within?

Mostly made. The little glass bottles were a bulk buy on Amazon, 50 of them I think for around 10 bucks, otherwise everything is hand or GF made. I crocheted the scarf, sculpted the sorting hat, fang, monster book cover and cauldron out of clay (white playdoh specifically, easy to appropriate from the youngling without notice

), the book’s teeth are toothpick tips and hot glue gums (I actually made a cardstock book first, then covered it in the clay), the other books and papers are card stock and images I found online and printed on my inkjet.

The trunk is constructed from cardstock, Philosopher’s stone carved from a hot glue stick chunk, the photo frames are cut and carved out of chipboard. The cauldron holder is a large jump ring with toothpick legs and a hot glue stick candle. The wand is a toothpick with some hot glue handle-work. The snitch is a silver bead that I painted gold and used wire and UV resin to make the wings. The cage is cardstock, toothpicks, a jump ring and a pull tab from a quart of milk. The bottle of Felix Felices is a crystal-style bead with a toothpick jammed in it and a hot glue knob for the stopper. The nail in the wall holding the proclamation is a toothpick with a hot-glue nail-head. Then various applications of paint, marker, distress inks, and varnish/sealer for certain things.

Took about a month of evenings to think about and figure out how to make it all, just one piece at a time until I had enough to build a box around.