Has anyone else been using their cell phone as a Wifi Hotspot? It works awesomely

I’ve now got unlimited data, and my cell phone is 1,000x more reliable than my home wifi, especially since I have the forge on another floor…this is so much better than having to run another wire and set up a second router. I have to be next to the forge anyway, and will always have my phone with me, so this is perfect…

that’s handy! My provider does not allow tethering/hot spot use but that would be great for people who may take their Glowforge to craft fairs or some other venue where they need to be mobile.

Oh yeah! You can run this now from anywhere that your phone gets Internet from, if you can tether…Crafts Faires in the enchanted forest!

It’s what I’ll have to do at Maker Faire. Glad you have been testing it out!

For those that can’t tether, you might consider getting a mifi from FreedomPop. I’ve got this one: 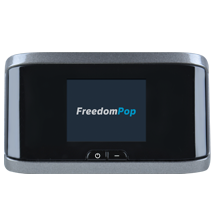 It’s a Freedom Spot 803s Hotspot (really I think it’s from Sprint repackaged). It was a refurb that FP was having a deal on, and the cool thing is I pay nothing for the first 500 meg (LTE) per month. I keep it on hand for when we lose power and the router goes out. Then I can get data on my iPad and iPhone (up to 6 devices). They do have all kinds of plans if you want more data.

Did you feedback to @support@glowforge.com? (They like to know the parts that work well too.)

Oh, hadn’t thought about that, but I will, thanks!

It’s what I’ll have to do at Maker Faire. Glad you have been testing it out!

Word of caution to keep in mind: the data availability of hundreds and hundreds of people in a tiny location is liable to be horrible and inconsistent. I’d consider testing this more by taking a laptop and your cellphone to a densely packed sports event and seeing what Speedtest reports…

Careful with using this at a Faire. There is still just one cell tower in proximity, and all faire attendees are trying to use the bandwidth of that tower.

So even cell internet can be spotty in large crowds. (I remember I wasn’t able to upload any images while at the Faire, always had to wait until I got back to the hotel at the end of the night)

Pick up Wifi access through the Faire if it is available, and see which one works best. From seeing previous performance of the Glowforge booth, I imagine the cell is probably the best bet.

Careful with using this at a Faire. There is still just one cell tower in proximity, and all faire attendees are trying to use the bandwidth of that tower.

I can confirm this. While at the BAMF in '15, cell coverage degraded as thousands of attendees flooded the Faire. Data was the first to go, followed by voice. By mid-day, my family was down to using SMS texts to find each other…

Darn. I was ok at NYC maker faire…

That is mostly because that area is saturated with cell towers due to the US open stadium being relatively close by. Also they have gotten so good at these events with portable cell towers to augment coverage. All the local sports stadiums are putting in microcells out in the stands as that is now a selling point at sports events.

And that’s why I love NY, baby! lol

Also they have gotten so good at these events with portable cell towers to augment coverage.

One man’s portable cell tower is another agency’s Stingray tracker, after all…

Oh hey, that’s clever and gets around any portability issues with the GF needing to be internet connected.

Ooo, and I just got a new truck that has its own wifi hotspot built in through OnStar, so that means I could LASER WHILE DRIVING!

(I wonder if they thought to recommend against that in the safety manual.)

LOL! That’s like the iron whose safety manual states that you must not iron clothes that you are wearing at the time.

Pppphhh, they’ve never watched be get a wrinkle out of my shin area…Olympic Level Gymnastics.

Oh yeah, I’ve definitely done that one before. Iron a shirt, put it on, notice one small missed wrinkle and… [string of forum-inappropriate language]

Reminds me of the person that did some serious hacking together of a linux server to feed massive amounts of data to his radio in the form of music, and then started working on extras, including mobile internet.

Also they have gotten so good at these events with portable cell towers to augment coverage.

Cell coverage at BAMF not a problem. A hundred thousand phones searching for WiFi and/or many of them having their hotspots turned on a problem. I don’t think they had a problem in the glowforge booth, but several people were having issues connecting/staying connected to a hot spot including during dan and shell’s demo.

So great to meet you @caribis2 at BAMF. I never lost internet access with my cell phone using AT&T. Only one time did I lose internet access with my mobile hotspot for about a half hour. I assume what did happen was wifi congestion issues. It really hampered my plans for productive demonstrations. Had a lively exchange with a few tech folks who pointed out the wifi only connection of the Glowforge and using only the 2.4 g band for wifi was the issue. They all swear by hard line drops. Yep, I do too, but you play with the cards you’re dealt. So I assume the big issue with connectivity was due to wifi congestion rather than actual internet connection. My laptop would have internet access but the app was showing the Glowforge was offline or it just got stuck in calibrating. @karaelena mentioned something about configuring channels but I didn’t take the time to dig into my hotspot to see if that would make a difference. More to learn about all this.

That being said, my mobile hotspot worked beautifully absent the congestion. GFUI response times were comparable to my home setup. @macphee and I both were connected through it and it worked well. Will check out data statistics and see how use panned out over the weekend.