So this is an addition to a previous topic that was closed by glowforge since they had replied to emails I had sent them. Here is the link to that topic: Stuck in autofocus after running each job

My machine is running now but only by a hope and a prayer. Initially I had installed a copper jumper across the broken spot in the cable but it had to be repositioned often because it was not flexible as the cable was. Once glowforge told me they wouldnt ship me the part until it became an approved as replacement parts I started trying for a more sustainable solution. I got my soldering gun out and scratched a bit more of the insulation away so I could spread solder across more of the broken wire. I added a tiny splint aimed at keeping only that part of the ribbon cable from bending. It looks terrible but it works.

Just to cover my bases, I dont recomend doing this especially if you have warranty. But I’ll be a monkey’s uncle if they think I’m going to ship it back to them for 200$ to replace a simple 10$ part during the busiest time of year for my buisness.

I hate the way it looks but if you all want I can take a picture of the terrible looking soldering job once the new machine I purchased arrives.

I’ll still use the glowforge as long as it runs but only as additional capacity. 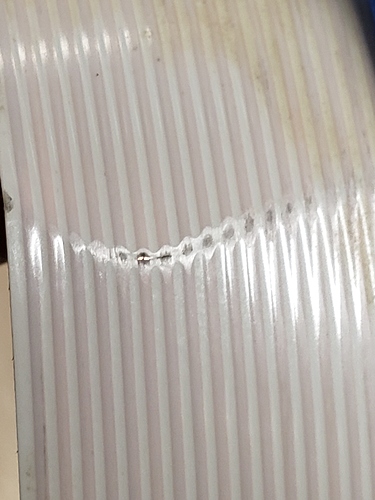 Which cable is this, the one that goes to the laser head?

You’re hardcore to try to repair it.

As for taping the cable to prevent wear, why not put a nice slippery piece of tape on the underside of the black bar ? Seems like it’d be better than altering the cable. I posted some sort of slippery tape once, let’s see… Ah, here we go:

Slippery tape Everything Else

I feel like there’s a use for this with Glowforge projects. I have no idea if it’s laser safe, that’s not what I mean… but we make a lot of boxes and drawers and stuff, this might make things slide more easily in those sorts of projects.

Yay for having soldering skills! I totally understand their reasoning, but that bites

Hopefully that time will be sooner than later!