HD engrave on Basswood hardwood barely through the masking

I’ve done a search but only found this,

Latest engrave settings comparison Made on a Glowforge

Here’s the new engraving presets on proofgrade maple. 4"x3". Mask was left on and quickly scrapped off, you can see a bit of it remains in the photo version and otherwise made little actual engraving on the wood. Source: [image] HD Photo [image] HD Graphic [image]

which doesn’t really help me, even though it’s very similar. I set up an engrave using the HD setting, but lowered the LPI to 340. If I hadn’t done that, the image was too complex for it to be done. When I saw the speed and power settings in proof grade (before changing the LPI), I thought they looked mighty low, but not knowing any better, just left them alone. The speed was 300 …but the power was only 6! It was a 3 hour engrave and I let it completely finish, even though I could tell it was scarcely going through the masking and was really pale. I plan on doing another pass tomorrow…it’s too late tonight. I didn’t want to interrupt it so that I could leave it undisturbed until later. Anyway, may I assume that it’s the power that needs to be boosted? And to what number? Some of the other hardwoods have extremely low power numbers, too. That will teach me to rely so completely on that barcode giving me the right setting, I guess. One thing that I agree with the other mentions of this is it sure takes away the ease of using proof grade if this is going to happen.

I would love any input I can get so I can try redeeming this engraving tomorrow.

I’m pretty sure that the higher the LPI, the deeper engraving you will get, all other things being equal. So if you change a Proofgrade setting that calls for, say, 450 LPI, you would need to compensate with either more power or less speed if you change the LPI to a lower number.

I haven’t done much engraving so I can’t make a recommendation. In this case what I would do is make a duplicate of the file and crop it down to a small but representative piece, and do a few test tiles with it before committing to the whole 3hr job.

Thank you. I’ve done test engraves but not changed the existing settings, so I guess I get what I deserve on this one. I’ve left it on the bed untouched, so I think I’ll raise the power and see what happens. It just may be me who needs to be committed!

I’ve left it on the bed untouched

Update; after leaving my piece on the GF bed overnight, I was going to just do another pass, but decided to flip the piece over, figure out some new settings, and just re-run the whole thing. I finally hit on raising the power from 6 to 20, and I lucked out. Another 3 hour engrave, but it turned out beautifully. At least I didn’t have to waste the piece of wood. 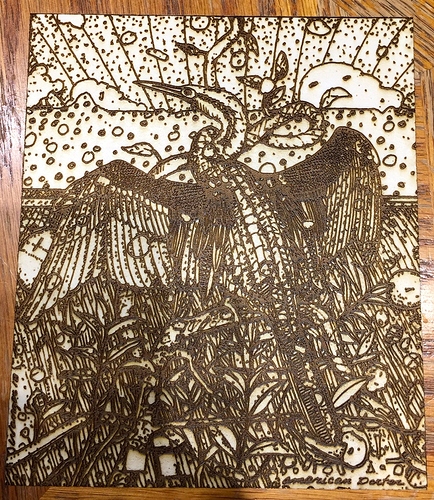 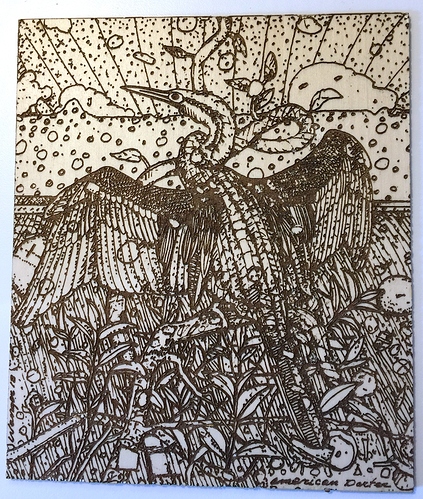 and another drawing on a Laser Tile…1 hour engrave time 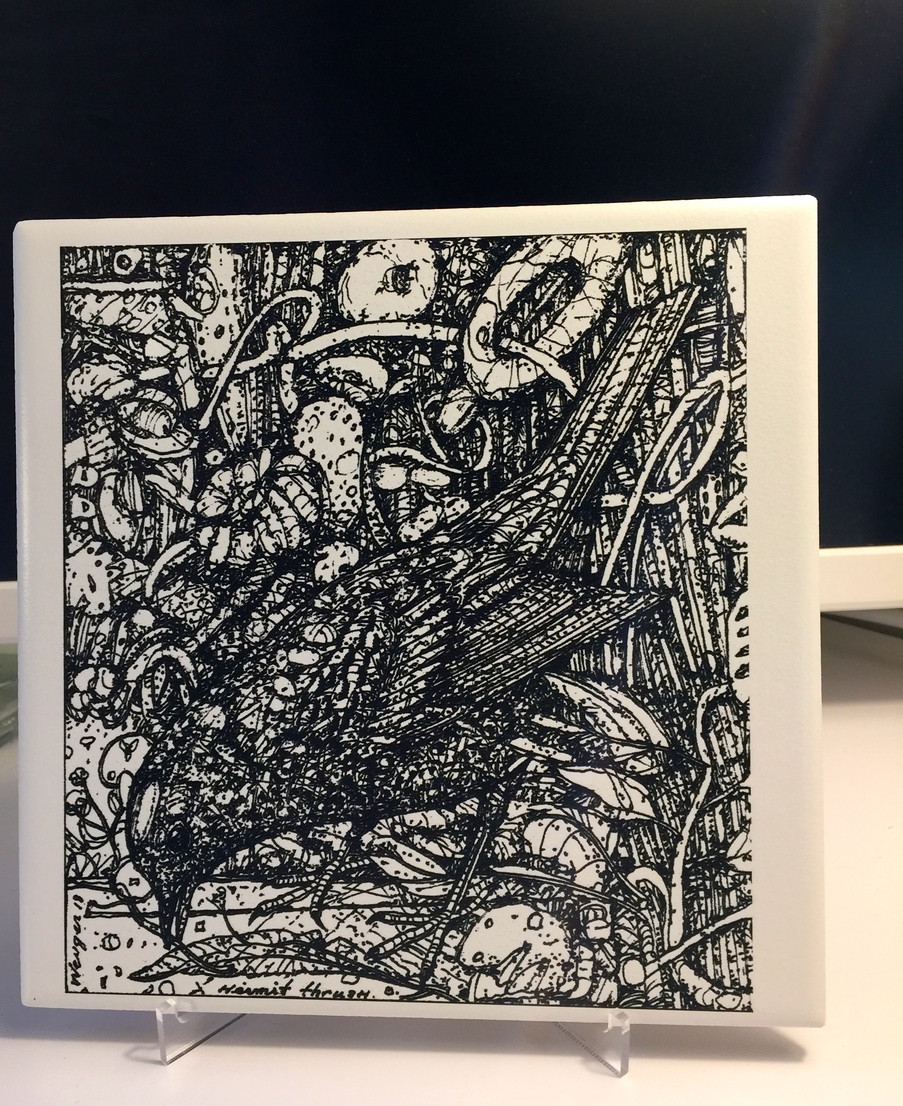 On another note…I am surprised by Basswood…that it is a hardwood. It seems more like Balsa wood to me. I could easily have snapped this piece in half, it was so ‘bendy’.

Thanks again, @cynd11, for your input.

Hardwood is not necessarily hard. Both Balsa and Basswood are hardwoods. Has more to do with how the tree reproduces. For a wood worker hardwood is commonly something different.

I am surprised by Basswood…that it is a hardwood. It seems more like Balsa wood to me.

Balsa is also a hardwood.

Had some oddities yesterday in the GFUI … settings weren’t staying when switching from Proofgrade cuts to manual (needed to increase the thickness of the PG Draftboard).

Thanks for telling me that. A woodworker, I’m not! That’s really interesting. Obviously, the name of something is not necessarily a description of its properties.

I didn’t know it until maybe 10 years ago. And immediately found zero use for the knowledge. When woodworking I need hard wood, not hardwood.

I need hard wood, not hardwood

That’s really where my head was when I mentioned this. I’m pretty sure I have zero need for it all, too. Especially when I found out there are two different ways of thinking about it.