Help me reduce the time?

). All the lines were originally meant to be cut…so in Inkscape I changed the outer to red (for cutting) and the inner lines kept black for engraving or scoring.

When I uploaded to Glowforge, the engrave/cut time is 47 min. even at a high speed/shallow engrave (851/85) and the score is almost as bad (34 min.)! What am I missing/doing wrong? (It’s just a little 8” round) I’ve done MUCH more intricate patterns for far less time.

For the inner lines I clicked “stroke to path” but it didn’t help. 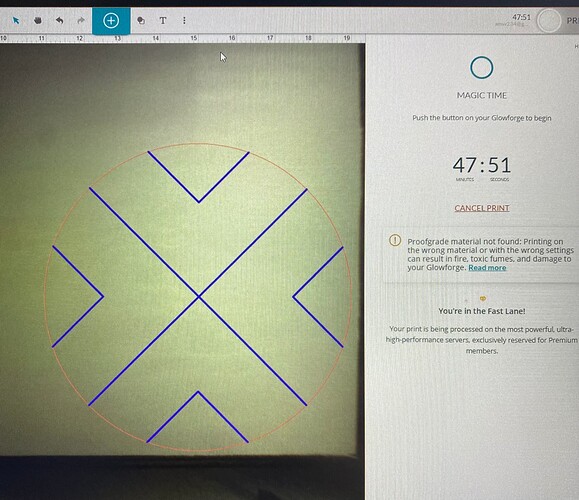 rotate so you have horizontal and vertical lines. It will make a big difference in the distance that the laser head travels for every row.

So it’s an engrave, which is different from a score, and an 8" round engrave takes about that long. Slow but pretty.

Are you dead set on engrave, or is a score going to work? If you scored this it would be much much faster.

Your operation of stroke to path turned them into shapes, which makes them solid shapes, and so they engrave.

Anyway, it’s hard to give you much more advice without knowing if a score would work for you.

You migth get a faster engrave if you separate those side V shapes.

Oh and hanspepe is right about a 45 degree rotation. You can hold shift and use the rotate in the UI to do it that way. or do it in inkscape by using the “[” and “]” keys to rotate 15 degree steps. so “]]]” will rotate you 45 degrees.

Thank you. I forgot to mention - when I set the inner lines to “score”, it makes two thin lines instead of one thick one, (see pic) even after I set “stroke to path” in Inkscape. I rarely use “score” - will it actually print 2 lines, or is that just how it looks on the screen? 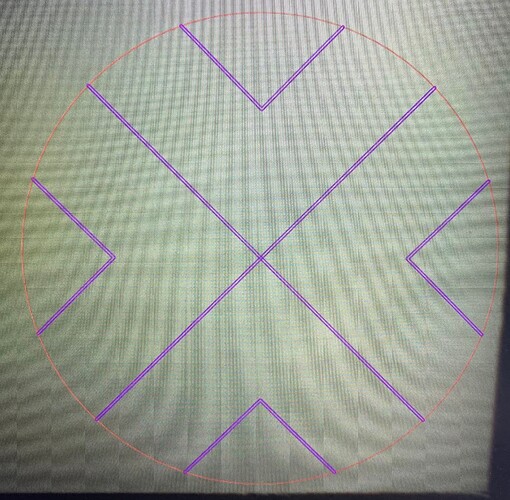 Thank you ~ just learned something new!

I am trying to achieve a “faux shiplap” look, which I’m assuming would need deeper lines (is that possible with scoring?). If the lines take THAT long to engrave, it would be faster to actually cut them and mount them with a ring backing (which I was trying to avoid the labor of doing).

when I set the inner lines to “score”, it makes two thin lines instead of one thick one, (see pic) even after I set “stroke to path” in Inkscape. I rarely use “score” - will it actually print 2 lines, or is that just how it looks on the screen?

It will print 2 lines - because when you “stroke to path” in Inkscape it turns that object into a shape, not a line. Your shape just happens to be very thin and almost looks like a line. To make it a single line you’ll have to delete some nodes in Inkscape. None of that explains why your score job says it’ll take so long tho, it should be very fast - what are your GF settings for score?

So I misspoke ~ the score time is super quick (2 min.) as you all indicated. But it makes two lines instead of one thick one. How can I score a thick line (or can I)?

I am trying to achieve a “faux shiplap”

If you go to really low LPI you will end up with a series of horizontal lines a couple millimeters apart and be very fast. or you can have multiple lines to score and you can have the same effect.

How can I score a thick line (or can I)?

Set the focal distance to .5" - it defocuses the laser and the beam will be broader when it hits the material than if it were focused. That will result in a wider burned line.

deeper lines (is that possible with scoring?

Scores are literally unsuccessful cuts - they go WAY deeper than engraving ever will, they’re just skinny (exactly the width of a laser). Defocusing (setting the manual focus depth on the individual step to .5) will get you a line about 4 times thicker.

Even with scoring, if you rotate by 45º it’ll be even faster.

they go WAY deeper than engraving ever will,

Technically that’s not exactly right either

Engrave a single line at 155 engrave speed and make a cut at 155 speed (which is 24.3 and 25 inches per minute, respectively) and you should have the same depth. There may be some difference at the beginning and end of the engrave line depending on exactly how the motion plan is set up on the backend, but the energy delivery is the same.

They will overlap on a defocus and become one fatter line.
Here is an experiment I did with defocus awhile ago. Have fun.

Fun With De-Focused Score - time saver experiment Beyond the Manual

I decided to take some time and experiment with the de-focus score (thickness adjustment) concept. I chose this butterfly design specifically because it took a lot of fiddling to get it to work in a 3 step process. Engrave body, engrave wing, cut design. I was working with it as nodes primarily. Maybe a better way to do it, but it was what I used to finally get it to laser in 3 steps the way I wanted it to. First part of the experiment worked well, in that it took me just a few minutes to mak…

18% is pretty major. Would cut 8.47 minutes off of the process time. That’s why I don’t like the new default proofgrade engrave settings, they add too much time for a barely perceptible increase in quality. 1000, 100 or 1000 full for almost all of my engraves.

This is not true because the amount of time saved will also be dependent on the shape of the engrave, number of passes, and the LPI. It’s possible that it might be longer depending on the shape of your art. It all comes down to the physics of accelerating the head of your laser.

All that is to say that the true time it takes is complicated to figure out and the best way to do so will be experimentally — load up your settings and hit print, Glowforge does the math and arrives at a time for you.

don’t engrave anything at less than a speed of 1000

There are times when quality and contrast will suffer if you try to go that fast. The look of the end result will depend on your other settings, your art and your material. Whether that result is satisfactory to you is subjective, of course.

Ahh. but there is a sneaky trick. The faster the head moves the more time it takes to slow down and go the other way! As a result, there is a sweet spot where the less time spent moving and the more time spent slowing down are at a balance, and going any faster or slower would take more time. You could spend more time than you might ever save finding that spot for every size and setting (a wide engrave spends a greater portion of the trip engraving, where a narrow one spends the greater time slowing down) that you would spend more time testing than engraving.

Folks who are used to the time taken to make only cuts are stunned by how long an engrave takes. For myself, I think of the time a 3D print takes and just go for it looking at the results of the labor that is the machine’s that takes only my attention and compare it to my doing it by hand that would take many times longer and takes far more skill and effort, and do not resent the time an engraving takes.

That is true but for most of my engraves I have found that I don’t see a decrease in efficiency until above 1200 speed. I personally haven’t seen enough increase in quality on the new slower proofgrade settings to warrant using it instead of 1000 speed.