How low can the GF cut/engrave?

So, say I wanted to engrave the inside bottom of a pie pan, can the laser focus down to the bottom of the bed without the tray or does the item being engraved have to be at least as high as the insert tray? If that makes sense. I don’t plan on having to do this but am just trying to get a feel for what the GF can do.
Thanks!

Has to be within the original 1/2" depth as if the tray was inserted. So if you remove the tray you will need to raise the object to fall within that 1/2" range. Of course if you don’t need a perfectly focused point then I guess there will be a little wiggle room.

Okay cool. That makes sense. Thanks!

Also keep in mind you don’t really want to raise things above the 1/2" either as you’ll block the machinery trying to move around. So underside bottom of a pie pan maybe, but unless you have a very shallow pie pan, the inside bottom would likely be a non-start.

Yeah I was thinking that. Thanks for the tip.

There is some distance above the 1/2" focus range before you interfere with the laser head. Not sure how high but the focal length of the lens is 50mm (~2"). Normally that would mean that the focus point is 2" below the lens which would be near the bottom of the head, but with the variable focus I’m not sure how that translates. I’m guessing about an inch by the videos we’ve seen.

I was going to answer here but @rpegg is absolutely correct. I don’t know the clearance offhand either.

Thanks guys this helps a lot!

You could turn the pie pan upside down and engrave what you want mirrored. Assuming it’s glass and transparent.

For sure, It was more of a theoretical question, but yes that would work!!

Here you go. I borrowed @madebynick’s ruler. He’s british so the units on the ruler are furlongs or king’s hooves or something. 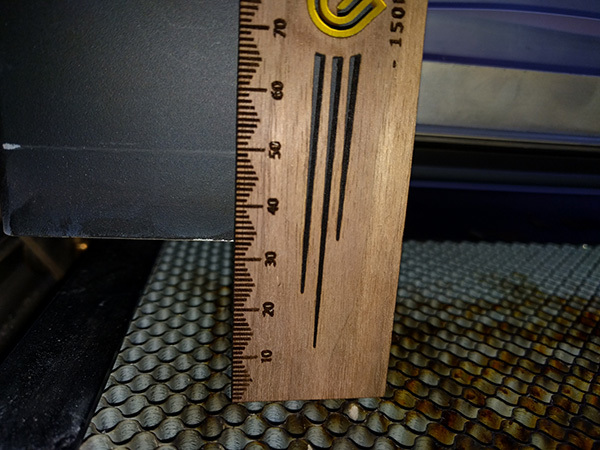 UPDATE: don’t take this as final - there’s another protrusion that may be the limiting factor. stay tuned.

Your description of the units on the ruler was hilarious. Hope I can remember that one.

Please tell me that’s made in a glowforge

…which should be helpful when lasering parts for an Ark

@liam: But of course. What else are you going to with an extra half light nanosecond of walnut scrap?

So, 3.24" from the tray before something would be in danger of getting hit by the inner workings?

LOL. I wasnt aware that a light nanosecond was really close to a foot long. Thats a pretty cool measurement.