When printing normally any smoke generated under the print head is blown away vigorously by the fan in the print head. I believe this also serves the purpose of blowing out any flames that might start where the laser is hitting the surface.

I’ve noticed lately that doesn’t seem to be blowing any air sometimes. Sometimes the smoke almost leisurely wafts away from the cutting location. Today I had a rather large flame sprout while cutting some proof grade maple plywood. I almost popped the lid when the fan seemed to wake up and blew it out for me.

The main exhaust fans seem to be working fine, at least their noise is consistent with how it’s always been.

Can the print head fan be replaced? I feel perfectly capable of replacing it, it seems to be socketed electrically. Or do I need to get a replacement print head? These little fans have been a problem in every similar device I’ve ever owned. I’ve replaced the ones in my makerbot 2 or 3 times over the years so this doesn’t surprise me.

There is an air assist fan mounted under and behind the head that rides on the carriage. The tiny fan mounted on the head on the bottom of it is to keep smoke out of the lens bore.

Yes, thats the one that isn’t reliably blowing anymore…

The air assist fan is connected via spring loaded pins in the bottom of the head assembly.

You may want to check that connection for gunk.

I had one incident where mine wasn’t spinning up. Unfortunately, I did a couple of things at once so not sure what resolved it. I blew out the gunk on the air assist fan blades with a rocket blower. Gave it a small free spin. And also cleaned the contacts on the bottom of the print head mount.

One of those 3 got it working again (with no problems since). I also clean the contacts (now) on the mount whenever I remove the head.

Some pictures of the carriage for reference (complete with dirty air assist fan): 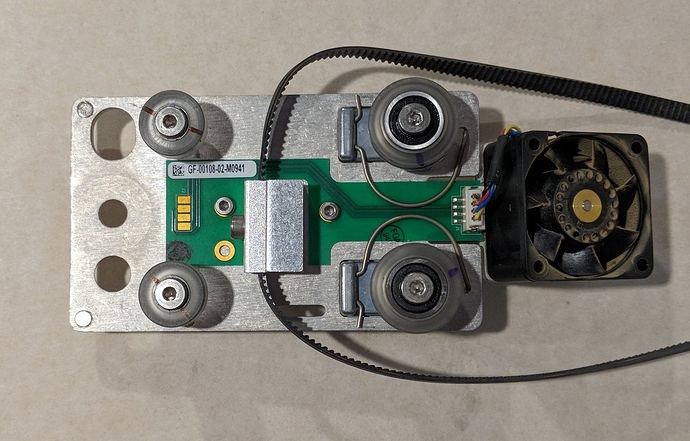 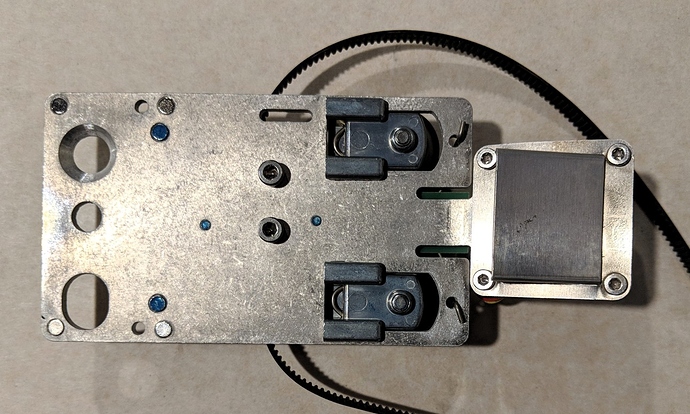 I’ve just taken the head off and cleaned those contacts, both on the board as well as the pins. I also blew some canned air at the fan itself, it doesn’t look gummed up. This is a relatively new machine and I’ve only had to clean the lenses 3 times (now 4 as I just went ahead and wiped them down with the zeiss wipes since I was in there) it looked fairly clean and spun freely apart from the magnetic points. We’ll see if that makes it more reliable again.

PS, but thanks to Scott I see there is another fan under the print head! Maybe that is the one that is causing me trouble! That doesn’t look quite so easy to remove, I will experiment.

That fan also looks clean and spins freely, I haven’t taken the carriage off though as that doesn’t look like a lot of fun if I have to replace the belts. Interestingly enough it appears that it’s powered through those pins on the print head and not the other way around. The only wires running to the head is that ribbon cable. So perhaps cleaning those will help this fan too. I will see what happens.

I see there is another fan under the print head

The small fan attached to the head is much weaker, and is intended to clear the lens housing of smoke. It is referred to as “purge air” in the Glowforge software.

Then I’m sure that the other one is the one that was causing my problem. I will experiment further to see what it does now that I’ve cleaned those contacts.

I haven’t taken the carriage off though as that doesn’t look like a lot of fun if I have to replace the belts.

I wouldn’t recommend removing the carriage without direction to do so from Support.

Once you are well out of warranty, though… The rear wheels are spring loaded. Gently pulling forward on the carriage will allow the front wheels to clear the guide rail. At that point, it comes off fairly easy.

You guys are brave, I love it. Thanks for posting all this stuff, really good to share.

I haven’t even contacted support officially yet. So far it seems to be running fine but I haven’t done a long print on it since the contact cleaning. I don’t recall wiping down those contacts as being on the list of things to do during a cleaning, so I never did it. I will re-read those instructions to be sure but if it’s not there as a cleaning step then it probably should be.

That blow out fan, or whatever it’s called, looks easy to replace too if it’s not hard to get the bottom carriage off. I hadn’t even realized that was there, I thought the “purge air” fan was the one generating all that air. Is there a more detailed set of information about the hardware than the one marked Beta that contains the unpacking and cleaning instructions?

There are 4 pins to the fan, is it 2 speed or is one of those feedback from the tachometer that many of these fans have? Would the firmware know if it wasn’t spinning at full speed and would it have sent me any notification to that fact? Theres not a whole lot of information in the web interface on the state of the machine but it certainly didn’t popup any errors at me while I was printing, it just kept going even when the fan stopped running.

Actually, you have officially contacted Support. A posting in this section generates a support ticket.

Ah, well we shall see what happens then

On a four pin fan you have power, ground, control to set the speed and a tacho signal to report the speed.

Yes the GF should be aware the fan is not spinning and be able to alert you. However it seems all but the totally essential sensors are ignore at this time. I.e. it looks at the coolant temperature and the safety interlocks but not much else. I cannot imagine why they can’t implement such simple things in three years. However looking at some comments in the source code they put a lot of effort into the fade routine for the LEDs. Looks like the person who wrote it had far too much time on their hands.

And I will beat the horse as long as GF still claim it does all these things that it doesn’t. Remember this video from 17 months ago claiming 50 sensors? Does the deceleration of a good cup of coffee end a print yet?

How hard would it be to detect fans not spinning and produce a meaningful error? Especially as no air assist can potentially cause a fire.

There are some infra red detectors in the lid. The only thing I can imagine they are for is flame detection but I doubt they do anything at the moment and they have never been mentioned.

If you don’t like what @palmercr says then by all means block or ignore his posts, but your last 2 posts have been thinly veiled insults and uncalled for - he is not writing to you, not writing at you. You just jumped in to flog your own dead horse.

If you don’t like it at least have the strength to just ignore it instead of inflating the issue.

If you don’t like it at least have the strength to just ignore it instead of inflating the issue.

I try but every once in awhile it just gets to be just a little much. If we could mute a person I would but that’s not an option. Ignoring the continuous denigration of GF gets difficult at times but I’ll delete my posts because you’re right - they’re not helping change things either