So at the stable where we keep our horse (Bella) and where both my wife and I ride (I don’t ride our horse as I am way too big for routinely riding her). Anyway I have taken on maintaining the trails behind the stable. Recently we (my son and I) undertook a massive trail clearing effort (right when the heat wave struck) of both trails, with cutting all overhangs to 12’, clearing out rocks that stuck up, etc. However the two trails are really, really different, one is a nice meandering trail through the woods to the stream with some gentle inclines (one sort of steep 10’ long section). The other trail is seriously steep (I slipped a few times walking it while clearing trail). So I thought trail signs (like at a ski area would be cool). I named the two trails like ski trails (at my favorite mountain one of the very steep trails is polly’s folly, so using the stable owner’s top horses came up with the names)

So I drew up some signs in AI, and then of course couldn’t get the image to do what I wanted so contacted @Jules who as always figured out what I had done wrong (haha, tried multiple compound paths on the same outer object - hint don’t) Anyway, with her expert guidance salvaged what I had and got to a working state. I then got some red-oak boards at Home Depot (actually pretty cheap) at 1/2x4 which I figured would be perfect for the job, then immediately ran into this issue:

Why is this job too large to run? Problems and Support

Thanks for the suggestion! I’ll make sure the team gets it. I’m glad you resolved it! I’m going to close this thread - if you need any more help, go ahead and post a new topic.

Which I solved by finally realizing it was the multiple passes I thought I needed (you don’t full power cuts through red-oak like butter). Anyway, converted the AI image to a PNG thinking the error was too many nodes or what have you (plus photoshop doesn’t have the stupid issues with compound paths and looked perfect) Honestly you’d never know these were not vector images.

Each job was 300, full power for engrave (I used a miter saw to cut, but engraved the cut lines for the arrows - kept them blunt figuring sharp wood would rot more easily) and 2.5 hours later had the first one. Then the second one engraved while I used liquid acrylic to fill in the difficulty marker). I did the intermediate level in cerulean blue and the beginner level in bright green, in michael’s. Then the whole thing got shellacked. I mounted it to a 4’ high pressure treated 4x4 post with a metal 24" post-holder (you pound in with a sledge and bolt the 4x4 in place (which given this is sitting untouched in the woods will be fine, no need to lug concrete into the woods). 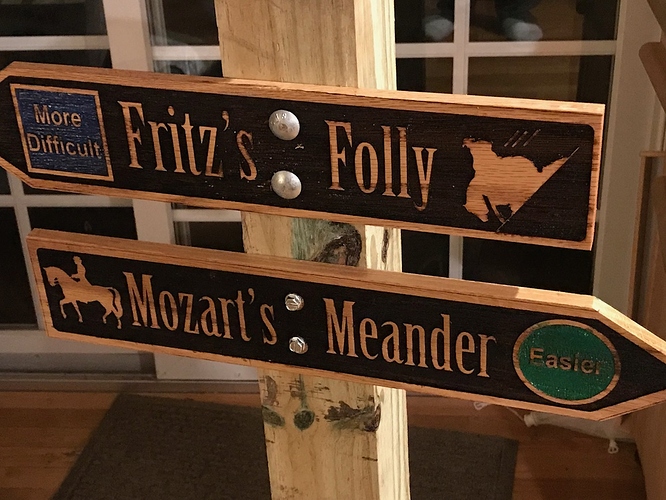 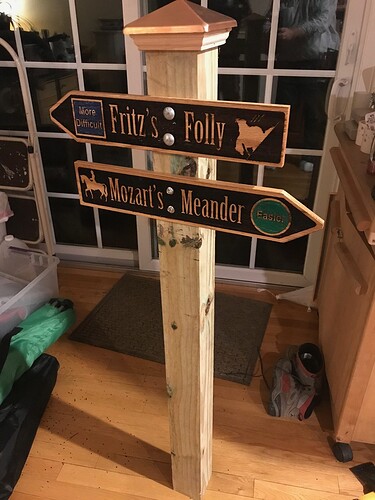 I will install it tomorrow when I ride and post an installed pic.

I will add that the plume of smoke coming into my backyard from the engrave was amazing. Looked like the grill was on. Red-Oak is super smoky especially at full power (it’s engraving about 1/8" down per pass)

They look great! I like how the raised edges and text turned out.

Fabulous and very civic minded (not surprising). I’m sure it will welcomed by all!

the plus side is that’s also likely why you got such a nice, dark char on the engrave.

The Home Depot post-anchor went in super easily, about halfway in via a mini-sledge, and then used the back of my 16lb maul to pound it flush. 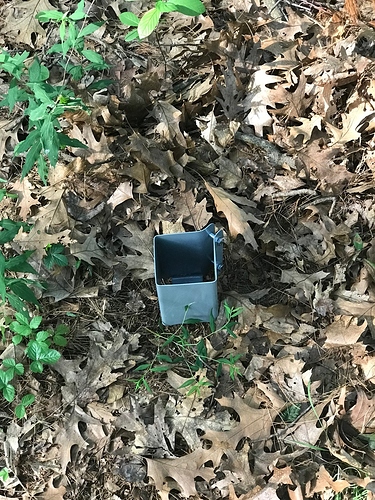 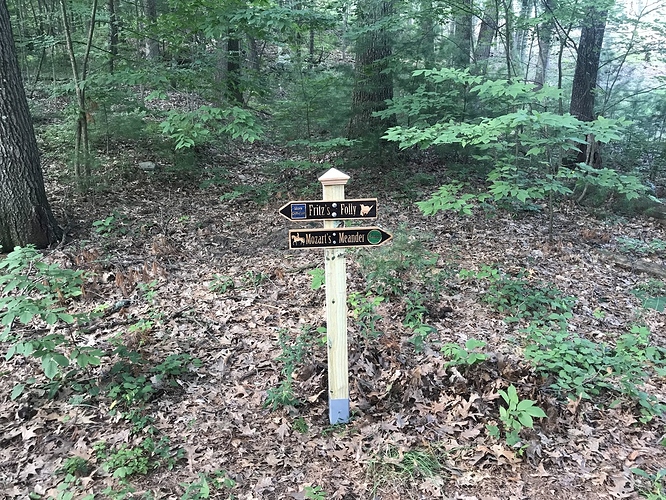 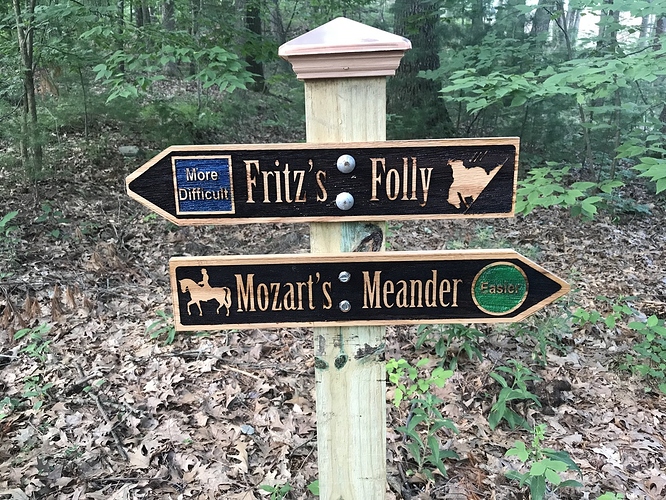 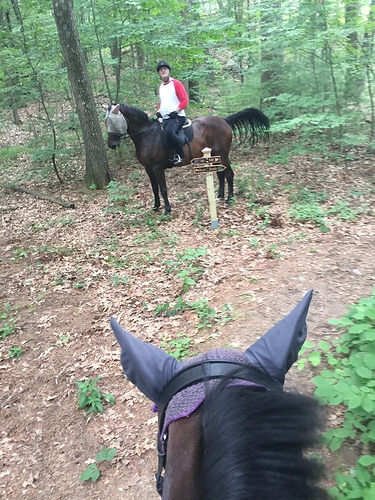 Hahaha! The image of the horse sliding down on its haunches is universal language!
Nice work.

Super nice job! Hey, I wonder if you could hang a chunk of beef or ribs in that red oak smoke plume and get a nice bit of smoking going?

chunk of beef or ribs in that red oak smoke plume and get a nice bit of smoking going?

Not sure why “Easier” looks like it’s mostly painted over, it’s pretty clear (there was a tiny bit of seepage under the masking, but overall pretty clear)

Pretty cool project … and for the record … I’m not referring to the clearing of the trail!