I am new to this forum and waiting for my GF to arrive. I have downloaded Inkscape 1.1 and 1.0 and both versions are extremely slow on my iMac 2019 with Catalina OS. I see that’s an issue with other people on Inkscape’s website, doing Google searches and on this forum.

Here are my questions and concerns. Has anyone found a fix or a workaround for this issue with Inkscape or has there been a resolution to this problem? Would it be a better alternative for now to use Affinity Designer since I do not want to pay a monthly fee for Adobe Illustrator. Does anyone else have an iMac that is newer with 64-bit OS and not having this issue with Inkscape?

I switched to Affinity Designer before Inkscape 1.0 came out – I got tired of fighting to get it to work on my MBP. I’m quite happy with AD.

I have to restart Inkscape every now and then for it to continue to behave.

geek2nurse and arh2 what OS are you using? Are you both using Mac OS X?

I have Big Sur.

Welcome to the forum. I mostly use CorelDraw, but it has it’s issues too. Although Inkscape is popular around here I personally detest it (but I’m a grumpy old fart stuck in my ways). I’m also not a big fan of Vectornator. I have come to find I actually use many different programs and apps and will jump back and forth between my Mac, MacBook, iPad Pro and iPhone (can we say fanboy

) that best do what I am trying to accomplish. I’m sure it is not the best way to do it but I some programs are better at some things.

I run on Catalina - haven’t updated to Big Sur yet. Partially because of Inkscape - want to make sure that’s not an issue.

I downloaded AD with the trial version that’s good for 10 days. Currently it’s 30% off so it’s only $35. I’m not sure how long the promo is going on so to be safe I might just play around with the trial version tonight and maybe order it tonight or tomorrow. I’ve looked around in the UI a little bit this afternoon and it has a similar feel to Photoshop and Illustrator. It definitely has a UI that seems better IMO then Inkscape.

Could anyone else chime in for the pros or cons of AD vs Inkscape?

pros or cons of AD vs Inkscape?

I never saw Inkscape till a month after I ordered the Glowforge, and now it is my go-to software, but then I have a PC. There are a lot of things I would like to see but not sure AD or AI has a better answer for a PC but if on a mac I guess 'built for it" is better than “adjusted to make it work”

Could anyone else chime in for the pros or cons of AD vs Inkscape?

Affinity Designer is still missing a few features whereas Inkscape has pretty much anything you could think of. But AD runs much better on macOS and most people (including me) seem to find its user interface much easier to figure out.

One thing to watch for in Affinity Designer is that certain path operations (most notably Subtract) generate paths that require the shape’s fill mode to be set to even-odd in order to display as expected but the Glowforge web interface has a bug where it doesn’t support the even-odd fill rule in SVG files. (It does support it in PDF files, though, which is one of several reasons why I generally save files as PDF for use with the Glowforge.)

You can also do a lot with Gimp

All this time I have been using Gimp to create a nice fuzzy line that Inkscape could use to make a nice trace and then I thought about this… [export] Well, what happens when you try to export a path? What it gives you is a blank space with no name or suggested file type. So no guts no glory

I called it name.svg and tried loading it in Inkscape… [gimpscape]

Well this has been a wealth of information but I still have the same unanswered issues and concerns I had initially when I posted this thread. Which is, is there a workaround or a fix for Inkscape to operate on newer macOS without lagging or bugs issues?

I really like the idea of a free open source app like Inkscape, but at the same time it’s useless for me to use on my current set up since it’s a new Mac and Inkscape runs painfully slow to the point where I can’t even move an object without waiting a few seconds for it to catch up to the cursor movements. My computer acts as if it’s a 10 year old boat anchor. I have more robust programs that work perfectly fine e.g., Photoshop Elements.

Just curious, what features is AD missing that you’re referring to?

And can you elaborate more on the odd-even or even-odd feature or give an example if you don’t mind since I’m a newbie.

Just curious, what features is AD missing that you’re referring to?

AD doesn’t yet have a Knife tool like the one in Illustrator to quickly cut shapes into pieces. (Instead you need to draw a new shape and use the Divide command to cut it out of the original.) Nor does it have a Scissors tool for quickly splitting paths. (Instead you have to use the Node tool, click to add a node, then click Break Curve. It does the same thing, but it’s more cumbersome.)

There are lot of little things like that. And a few bigger things are also missing, although those are mostly advanced features like mesh distortion that most people don’t use.

On the other hand AD has a lot of other cool and useful stuff. (But a lot of it is geared more towards illustration and is less applicable to generating files for the Glowforge.)

They’re constantly adding new features, and eventually they may catch up, but for now it’s a bit behind. But the price is a heck of a lot better than Illustrator (which is subscription-only now) and more user-friendly than Inkscape.

And can you elaborate more on the odd-even or even-odd feature or give an example if you don’t mind since I’m a newbie.

Fill rules define what is “inside” and what is “outside” of a shape. There are two common rules, even-odd and non-zero. With the non-zero rule it matters which direction each path goes: 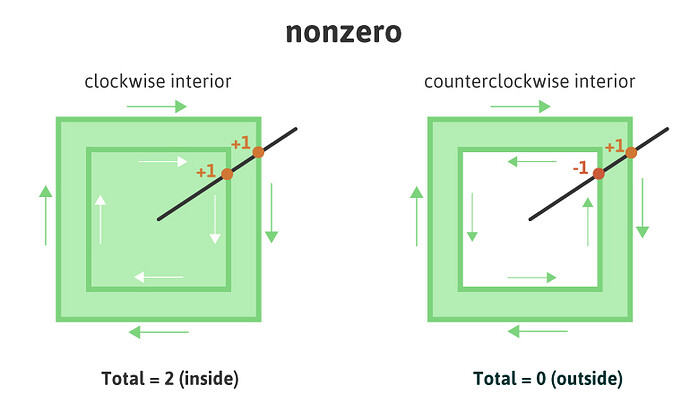 With the even-odd rule the direction doesn’t matter: 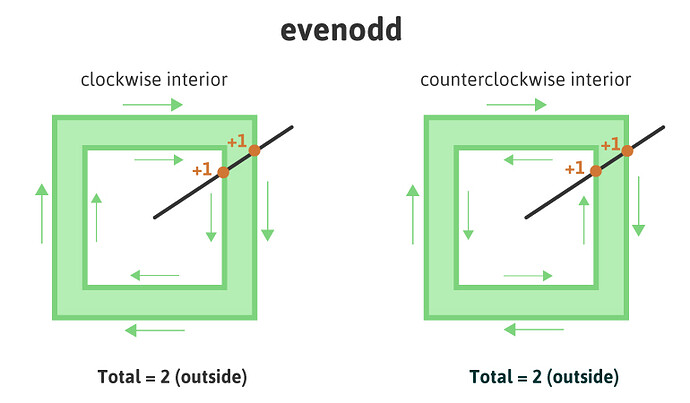 The Glowforge software supports both rules when you’re using PDF (although I think I’ve run into a few quirks in the past) but with SVG it always uses the even-odd rule. So some shapes get filled in when they shouldn’t be.

In this next example you can see how the shape in the top row looks different depending on which fill rule is used. In the top row the inner and outer paths go in the same direction, whereas in the bottom row they go in opposite directions. With the even-odd rule the direction the paths are drawn doesn’t matter. But with the non-zero rule it does, so you get different results.

When importing SVG the Glowforge forces the fill rule to be non-zero, so anything drawn like the shape in the upper-right ends up looking like the shape in the upper-left. People who use Illustrator tend not to run into this because Illustrator defaults to using the non-zero rule and it will reverse the direction of paths as needed to make things look right. (Although it doesn’t always work. When a path crosses itself it’s easy to get a situation where you can’t fix it by reversing the direction of a path. In that case the even-odd fill rule sometimes really is needed.)

The Glowforge gets it right (at least mostly) when using PDF, so that’s one reason I mostly use PDF with the Glowforge. (It also handles text in PDFs, which has to be converted to paths when saving as SVG, and with PDF you shouldn’t need to worry about designs importing at the wrong size, which can be a problem in SVG.)

Which is, is there a workaround or a fix for Inkscape to operate on newer macOS without lagging or bugs issues?

You’ll have to wait for the Inkscape people to fix it. Or you can use the old 0.9x versions of Inkscape which are faster, but those are a pain because you have to install XQuartz which is finicky and acts a bit weird at times. The newer versions of Inkscape are much nicer when they aren’t being super slow.

I started using AD early on, after trying Inkscape, with which I could never quite get comfortable. I love it now after taking the past 2+ years learning to use it. I know there are features that I don’t even know about, yet…but, that’s part of the fun to me, discovering a new technique or new ability that I didn’t have before.

With the even-odd rule the direction the paths are drawn doesn’t matter. But with the non-zero rule it does, so you get different results.

Actually, It appears that the new Inkscape will do either. I was having to toss out designs after combines as areas got filled in, but the last two new icons were to choose which way to go and much work would have saved had I known that.

The Glowforge software supports both rules when you’re using PDF

Ahh, that would explain why I don’t have that issue anymore. I use PDF instead of SVG now, pretty much exclusively.

Does XQuartz allow the 32 bit older version of Inkscape to run a newer macOS 64 bit?

Oh, were the pre-1.0 versions 32-bit only? In that case nothing will let you run them on Catalina or Big Sur. (Aside from running another OS inside VMware or Parallels.)