The bedside charger setup I’d been using hasn’t worked so well since upgrading to iPhone 12 — the flat sides of the phone make it not sit correctly on the stand unless I’m extra careful, and waking up late because the phone ran out of battery overnight is no fun.

So, time to get one of those new MagSafe chargers and build my own! 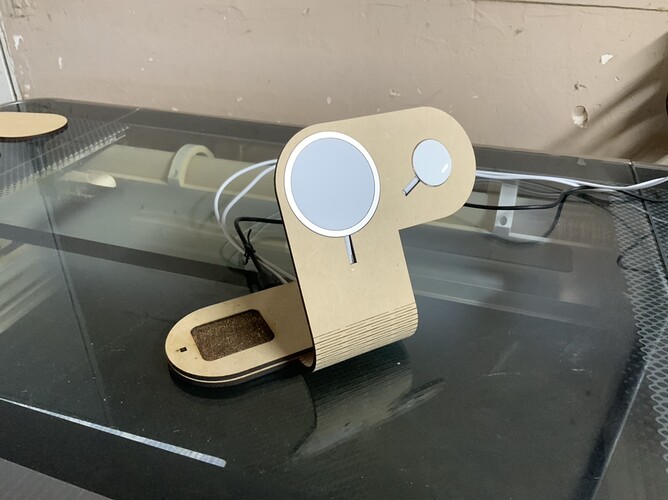 This is just a first working prototype in draftboard… I’ll probably go through a round or two of refinement before making a final version with nicer materials. But it works! 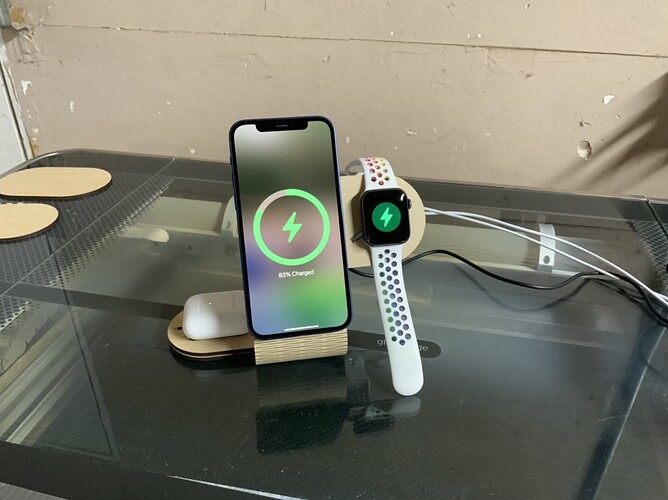 The bottom is two layers, with a cavity hollowed out by deeply engraving both sides. That makes room to route the iPhone and Watch cables nicely, and a little space to sandwich in a random cheap Qi charger part (found on AliExpress) below the space for setting AirPods down.

Pulling the iPhone off the MagSafe charger takes some force… to make the stand hold itself down against that I’d need to fill the base with lead or something. So instead I use some nano suction tape to non-permanently adhere it to the bedside table.

The only downside to this whole endeavor is that the whole thing needs three cords and three USB power sockets… I’m a programmer, not an electrical engineer.

Looks good. My only problem with it is, I very often have my phone in landscape orientation on the charger. Can’t do that with the watch charger in the way. I might want to change the phone area to the bottom, down by the living hinge.

Question about the Qi charger, does it have a LED and does it go out when charging?

I bought 5 a year ago, and my only complaint is that it is on the entire time the phone is in contact with the charger. To bright for bedside. I would disable the LED, but I find it handy to indicate correct placement for charging.

The Qi module I got has multiple LEDs: one constant red when not charging, two or three blue when charging. But in my case it’s sandwiched between opaque draftboard, so I’m glad not to see it either way.

Nice one! I never got past the prototype with mine, it was “good enough” in draftboard. One thing that I found for removing it – it wasn’t exactly intentional, but there backing is a just a sliver taller than the phone, so when I want to pop it off, I can just put one finger on that and pull the phone away. Works reasonably well without having to glue anything to the nightstand.