Issues with free with premium designs 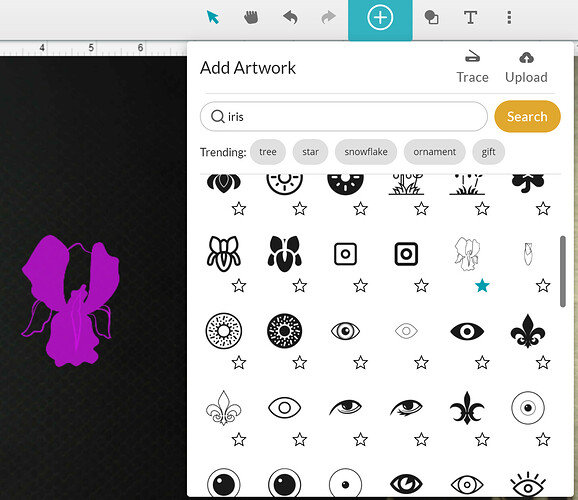 I just want to edit to add that I understand these files are designed elsewhere and being read correctly by the user interface. They are just not very usable designs in their current state. Some of what I wrote in this post and replies I later realized was incorrect after exporting the files again.

Hey there, so I pay for the premium membership and have not yet used any of the clipart designs available. I have found a few that I like but when I click on them to add them to the dashboard the user interface screws them up. For example in this photo you can see an iris that is starred which is purely an outline, but when loaded into the ui it fills some of the areas.
This also happens with files which have multiple shades of gray for different engrave depths. I’ve also noticed that the only way to be able to edit or manipulate these images in any meaningful way is to upload them to the ui and then export them to another program. The problem with this is that the ui is misreading the information in the files and then exporting the bad version of it. I know that these files are available through a partnership with another company. Is there a way that you can make it so that we can use our glowforge account info to log into their site to download them? Using the glowforge user interface as the middle man is screwing up the whole process. Not only are the files getting screwy, but the preview images are very small, and when you add one from the list but you want to keep looking in that same search you have to start back over at the top of the results.

Here is another example

With the iris, set the step to score instead of engrave and see what happens.

Say you need something with strawberries… On the Dashboard, choose Create, New blank design. Click on the + to add artwork. Type “strawberries” in the search box and click Search. [Screen Shot 2021-01-03 at 3.26.23 PM] Click the star below any you might be interested in. Continue to do this as you scroll down. On your last choice, click on the strawberry, not the star. That one will show up on the GFUI. Click again on the + to see all your starred strawberry choices in your favorites. Add … 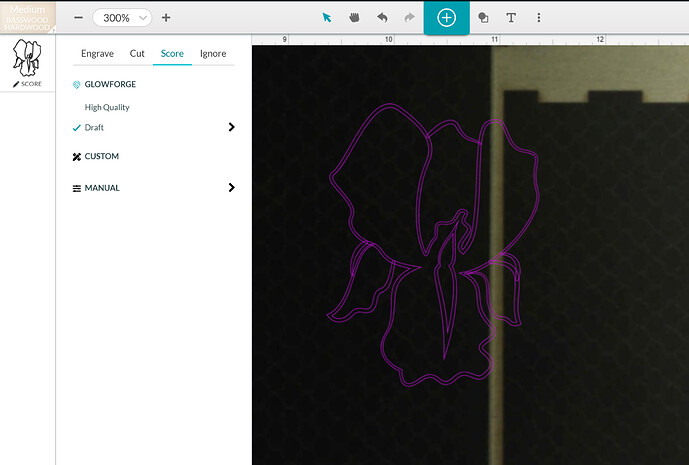 Thanks for your response. Using the star does make it more helpful to navigate, thank you. Still, this search feature is just lacking quite a bit in usability in my opinion. Considering that this is part of a paid service, I’m pretty disappointed in its seeming lack of value. Even if they kept it this way and just added the ability to log onto the other companies site to download directly would be a huge help.

As you can see here when set to score it will just score the outline of each filled space, which is not the desired outcome. I realized that these glitches may be due to low quality files and not the glowforge itself. For instance, with this file it may very well be that some of the spaced are filled white which why they are showing up the way they do. Also you can see in this picture that they have not merged the paths which can also lead to wonky things happening when engraving the file. All of these things are easily fixed in design software, and with this particular design it would probably still be possible under the current setup.

However, if you look at the other example I posted, the ui renders it in such a way that many different areas are merged into one, effectively losing half of the design. When exporting this to my design software, that merged version is what is exported.

As you’ve already discovered, this image has outlines of the strokes, it is designed more for traditional print, than score/cut in the GF UI. You could engrave it to get those strokes, which would take a long time (relatively speaking.)

Glowforge does not create these, their “premium graphics” is simply a portal to a subset of the images available from The Noun Project. The UI is not “misreading” it - it’s coming over exactly as it should. Many of the images there are not immediately usable on the Glowforge, because they were never designed for it.

I downloaded the same Iris image from their site, you can clearly see how it is composed of outlined, overlapping strokes, not a single, continuous outline as it appears in the “premium” search window, that could be scored. 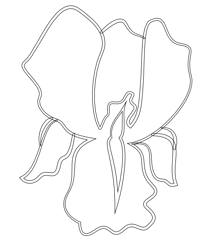 It could be easily edited inInkscape or similar to produce the outcome you desire - but of course, that’s not why you are paying for “premium.”

I realize these are not designed by glowforge and I guess saying that the ui misread the file is not correct. The problem is definitely with the files themselves. I just reexported the landscape image and discovered that the paths are still there, just filled oddly. I would have to edit that one a fair amount to get it to look like the preview. Again, I realize that this is not fault of the glowforge. I just think that since the only access we have to these files is within the dashboard it gives the impression that they are laser ready. Often I’ll click on images and it’ll say that its adding it to my design and nothing happens. I think my major issue with them in general is being locked into using them via the glowforge ui. I realize this was probably set up this way to be convenient, but I just don’t find it to be very convenient.

Okay so I’ve research even more and now see that you can sign up for a free account with the noun project. I was mistaken about much of what I though here. I read in other threads people justifying the cost of premium and these files were one of the justifications listed so I just assumed that it meant it was a pay for service that glowforge was paying for with part of our subscription fees.

We appear to get commercial resale use with the partnership. Per Noun Project… “ To use an icon in items for resale (such as Tshirts, phone cases, stickers, mugs), you must purchase a license for each icon using the individual purchase feature and Pay $2.99. Pre-paid credit, NounPro or NounTeam accounts may not be used to download icons for items for resale. One icon license purchased may be used for up to 100 units of product. “

Yeah I figured that out once I actually tried signing up for an account. I’m still inclined to wish for an ability to log in using our glowforge accounts somehow.

I’m still inclined to wish for an ability to log in using our glowforge accounts somehow.

As the Noun project has different design goals than those using lasers, I have found that if a design screws up trying to use it there is usually another very similar in there too. Short of that, if all the bits are set to “score” before export you will have as good as possible to manipulate in your design software if the design is worth it (which it might be.)

Thanks for letting us know about this. As you know, the ability to edit Noun Project artwork to the degree you speak of is not possible in the Glowforge app, and some artwork may not be optimized for printing with the Glowforge software. I’m very sorry for the inconvenience, but thank you for taking the time to share your feedback and some suggestions. I’ve passed these on to the team.