I’ve been studying Japanese language as a hobby for the last five years or so. My five-year-old daughter’s been with me the whole way — early on, it was something to read myself while bouncing the baby to sleep, but later she wanted to follow along with what I was doing on my phone in idle moments. Now she’s picking up characters and words herself.

Last Xmas she got a set of Japanese “alphabet blocks”, which she loves to read and play with. But that set covers only the hiragana — one of the two phonetic character sets used in Japanese. So, together we set out to make our own set featuring the katakana characters. 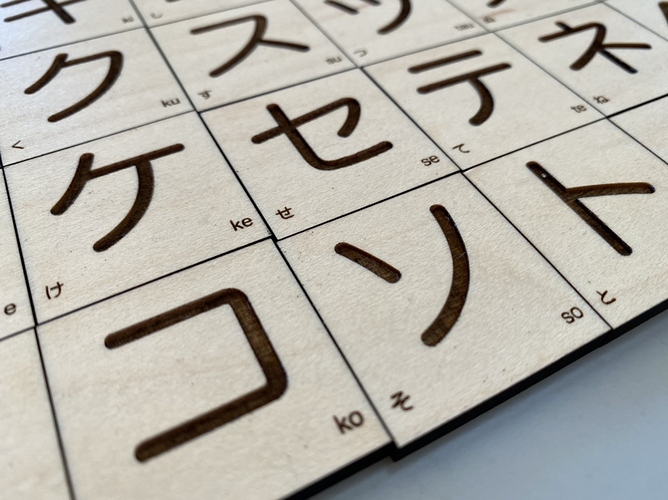 Each tile has the katakana front and center, with both the corresponding hiragana and the conventional Western-lettering equivalent (romaji) below. 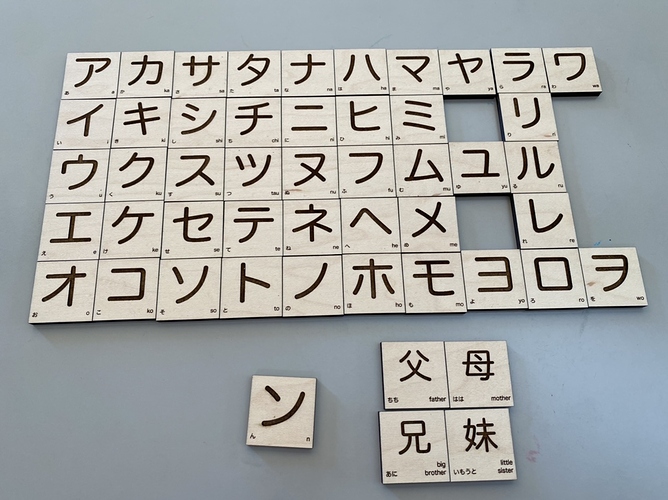 There are 46 kana, so making a nice 5x10 grid means coming up with four extra things to make tiles of. Her other kana blocks have four color-name words, but I’m not printing these in color. Since this is a personal project, the extra four get to be the four members of our family (with the Kanji, or Chinese-style characters, for each word). 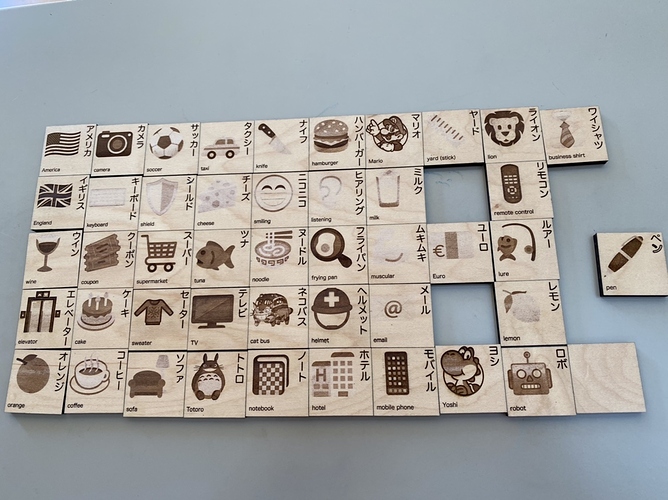 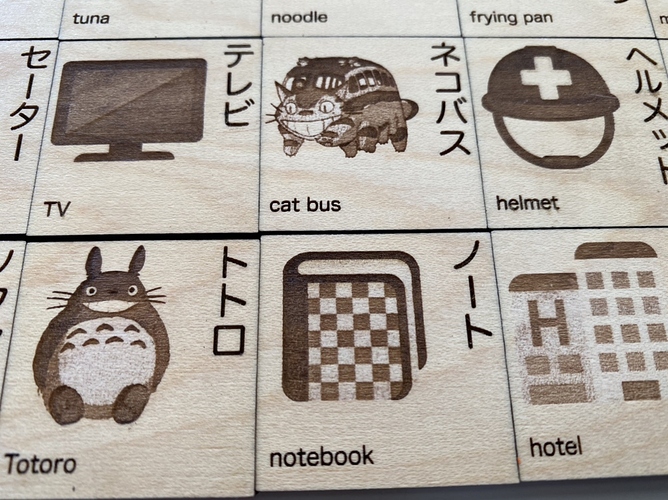 The flip side has a representative word for each. Katakana is used primarily for import words, names, neologisms, and sound effects, so we chose examples accordingly, including a few of her favorite things.

Interestingly, the “HD Graphic” setting on

thick maple plywood created an effect where some of the lighter colors in the art came out lighter (or at least whiter or grayer) than the surrounding wood. (Even after an alcohol wipe to remove residue.) It’s not very consistent, and didn’t work out so well for some of the designs, but it’s close enough for a personal project.

This was my first exercise in double-sided printing. I first cut a rectangle a bit bigger than the design, so that I could use @eljefe4 ‘s hold-down pins to make sure everything stayed in place after flipping the tiles. Then it’s just a matter of taking my artwork (which has both sides’ designs superimposed) and switching layers between cut/engrave/ignore in the GF UI.

Next up: the box to put them all in when they’re not being played with. (But that’s a less interesting project.)

Wow, great project, and such a cool way of learning!

What a great project to do together!

That is an awesome project.

That was me helping my mother learn shorthand by reading to her. I also learned to write it, but couldn’t read what I wrote.

My mother spoke French before English and they taught French in the Kindergarten a Prekindergarten where I went to school so I had a lot of words if not able to carry a conversation when taking it in college but when I first got the textbook did not recognise a word of it. I never did learn to spell in French.

This is cool. I studied Japanese in college and miss it, but without a native speaker to practice with, I haven’t maintained much. I do practice on Duolingo now and again , though!

Wow - what a great use of double sided pieces! So cool!

That was me helping my mother learn shorthand by reading to her. I also learned to write it, but couldn’t read what I wrote.

I can say much the same about a few programming languages I’ve used. Especially Perl.

Everything about this is just delightful!

I can say much the same about a few programming languages I’ve used. Especially Perl.

Definitely a great way to teach programming to children! you could just put out the parts and move them about!

I’ve been studying Japanese language as a hobby

These are great, i’ve always been fascinated with Japanese culture. I’ve worked for a Japanese company for the past 20 years, and i’ve spent a lot of time in Japan. I just realized that have not yet done anything Japanese related on my Glowforge. Thanks for the inspiration.

So cool - I’ve been wanting to learn Japanese for a while. Started but got stalled (learning Spanish - mostly to keep encouraging my daughter - on Duolingo).
Maybe time to take it up again (and those Totoro ones!

I can count on 1 finger

Fantastic job. Have you made the files available? I spent some time in Japan back in the 80’s and have friends that just moved there. I hope to return in the near future.

Great work!
You seem like an earnest learner of the language, so I just wanted to pass on:
Wine is ワイン、where you have ウイン。ワandウlook alike so I understand the switch.
Because Japanese is really only spoken in one country, we are always very touched when others want to learn our language. Please keep it up and we hope to see you and your daughter on our humble shores some day. 頑張って！