My kids wanted some custom treasure coins for their pirate chest, so I helped them come up with a few. The stylized skull with the crown was designed by my six-year-old, lol. We printed the larger coins at two inches, and the smaller coins at 1.5 inches. To do the backs, we just flipped them in the holes after cutting and did the engraving & scoring for the back.

They are meant to be “Chunky” coins for kids, so most of the wood I used was 5mm thick. We have some of them painted in the picture. I also included a file with some engraved dots you can use if you accidentally shift things before doing the back. Sized to the coin, the dots should be in the kerf if it’s lined up correctly. Run a very faint engrave with them, if its right place the coin over them (its boundary will be just around them). Enjoy 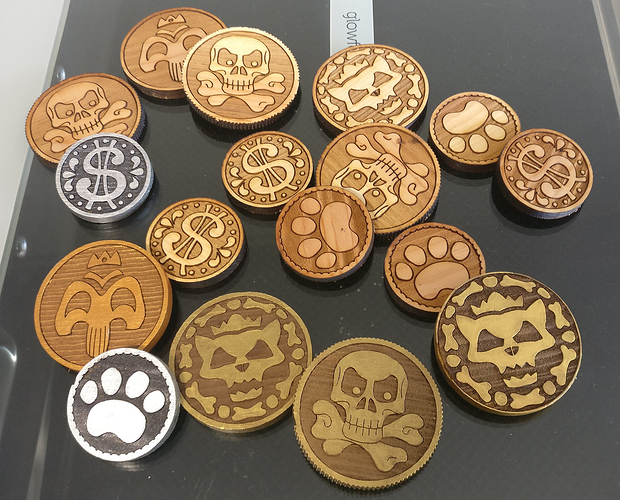 Great designs! (Bet they would look great with laser foil too.)

These are so much fun! I make some wooden coins for the kids at some of my events, but yours are so cool! Thanks for the share!!!

This is an amazing idea! My kids would love these too! I should do something like this for them.

These are just the kind of treasure that belongs in a pirate’s treasure chest. Well done.

Goldfish Made on a Glowforge

Just a quicky toss off. I did not realize it was plywood so I painted it 2 coats of White and one of gold. I was thinking that they would look nice as chrome paint but decided it was better that they be goldfish than silverfish. [Goldfish]

Ya, I love the look of that kind of thing but I can’t in any way use spray paints, or any oil paints, or any of the sort of resin or chemical based stuff that “sets”. It all gives me migraines. They would look great with something that could get that strong of a finish though. I actually thought metallic chalks would be easy to apply and have a much nicer metal finish, but you would need to set them with something too. I was just using my daughters paint, lol.

It all gives me migraines.

I keep a spray booth outside for that. If you ever want to stick two or more pieces of acrylic together it will be a much bigger problem than paint.

Ya, I can’t even be near something that has been sprayed for a good 24 hours. Going through art school was one of the hardest things I ever did, lol. I was really sick, a lot. But we haven’t even cut the acrylic that came with the machine because I know some heated plastics bother me and I am worried about how I will do with that one. I have only been cutting wood and cardboard, lol.

Going through art school was one of the hardest things I ever did, lol.

Rather like a person with bad pet allergies becoming a veterinarian? Taking up porcelain on a pottery wheel would be a less painful alternative. There are not many ways to avoid such chemical issues these days.

I did pottery as well, it was a studio art program so I did all sorts of things. The instructors let me skip oil painting (and do extra acrylic painting instead) and screen printing was a choice (so I picked something else). But there were a lot of shared spaces and ventilation. The second time I ended up in school, I did 3d modeling and animation, that was probably a better choice for me. Though I really do love painting and clay sculpture and pretty much every kind of art I can do without getting sick

Part of the appeal of the glowforge was just to be able to use my digital skills to make physical things again. I miss all the kilns and wood tools and such that my folks have, I can’t fit them were I rent, lol.

screen printing was a choice (so I picked something else).

The Miami Ceramic League was one of those things that could only come into existence when a moderately wealthy well educated woman was not expected to have a job to support that, and thus had money and time for other things. In more modern times it struggled to keep the doors open, but the primary investment could not be done today. A long way to get to the classes that were taught there and the production that was possible to members in what was a very unique thing.

One was a silk screen workshop that used UV set screens (set out in the sun, with your design blocking part of it) and washing unset material away with water, We then silkscreened paper towels with a diluted cobalt mix and wrapped them on the porcelain bisque and let dry before final firing. With water as the only only solvent the most sensitive person I think would have had no concerns.

Wow, that six year old has a ton of talent! The apple didn’t fall far from the tree, I’d say.

These would be fun to use in a Geocache!

I love the one with the skull with the crown. They all look great, but that one is very “piratey”.

5FDP are all about the kids. Bring some on stage during most performances. 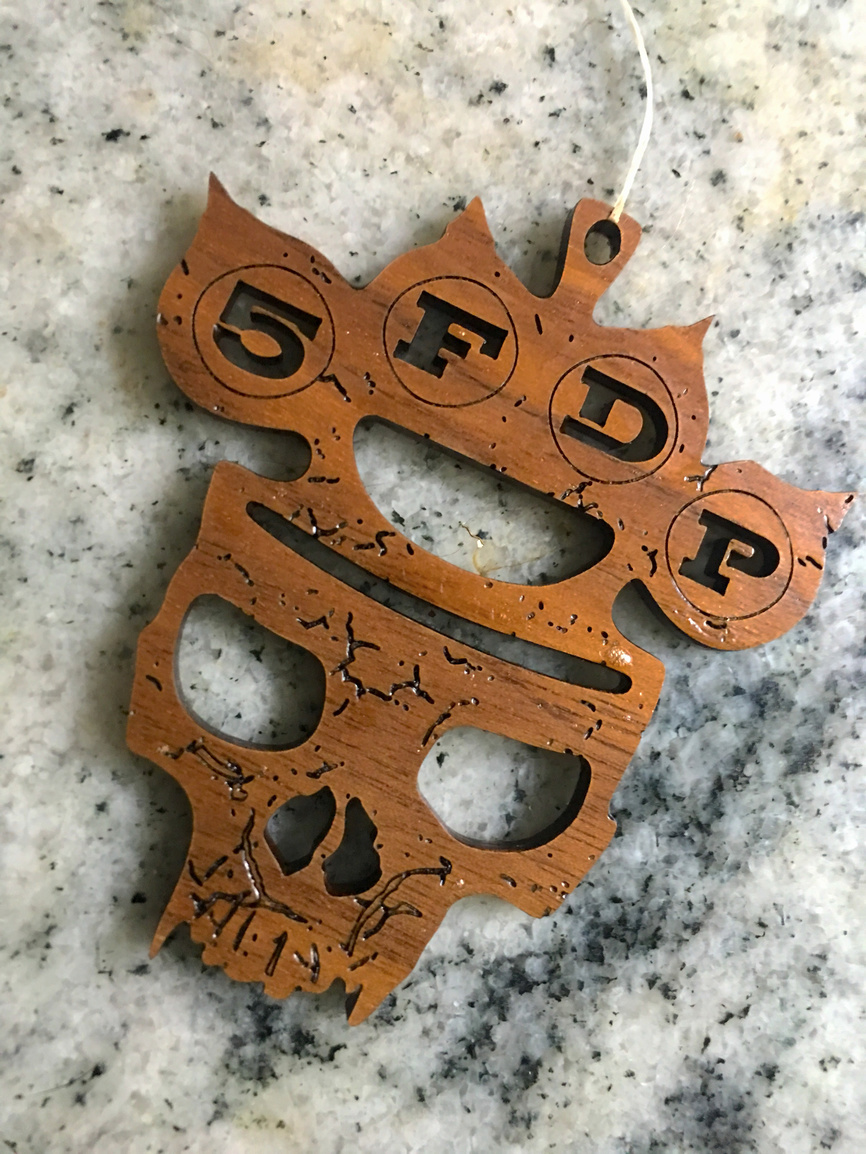 He actually didn’t even want to hold a pen at first, but over the past 2 years, he has done soooo many drawings, probably about ten a day. I am not allowed to throw any of them away, so I have a big pile of pictures showing a child learning to draw. I really do think in most cases its wether you get obsessed enough to practice that much, rather than anything else:)

I actually did some screen printing stuff in high school, but the teacher put together the screens (after we cut the stuff out for them) and the school used a non toxic ink. It just wasn’t what they used at my college. I really love working with ceramics, my mom ran a ceramic shop when I was a kid, but we never tried screen designs on it