This is not what I wanted my first post to be about.

I took off work today to unbox and setup the Glowforge with the family. We got it setup by around 8pm today. My 4 year old named it StreetSweeper and kicked off the first print of the Founder’s Ruler on Medium Maple plywood and was giddy and in awe watching it work. When we took it out I noticed that the cut didn’t seem to go all the way through.

We put him to bed and I took to the forum to try and see if anyone else had the same issue. I found the following thread: Glowforge not cutting through PG Material and based on some of the suggestions in there took a look at both the thickness of my proofgrade piece and setting for the cut of the ruler. I found the same thing that @Jules found, that the maple piece I was cutting was measuring around 0.121". I put the same piece of maple back in and ran the founders ruler again (2nd print) changing the focus height to .121". (When I converted from the proofgrade settings to manual settings on the cut something didn’t convert properly and it only did power level 1. I set the other 2 engraves to ignore, and reset the cut back to proofgrade and then back to manual and that carried through Power 100 and a Speed of 188(I think) and I re-changed the focus height to .121" and ran that cut by itself that time. Print 2.5 I guess?)

This was better but still not quite all the way through. Comparing settings again from that same post I saw that my Speed was 188 and the speed from the post was 155, so I figured slow it down a bit and I’d have it dialed in and could move on to the next project to print knowing I had the maple settings down. At the beginning of the 5th long triangle accent I jumped back as the laser tube shattered while I was watching the print. The machine kept on going like it was still working. By the time the initial shock wore off it had ‘completed’ and docked in the upper left spot but I turned it off and pulled the plug anyway.

Oh no! You got a bad bulb. Doggone it, that is not something you want to hear.

They are really good about getting the replacements out quickly though…I’m sorry.

Thanks. I appreciate it. I’ve got like 10 tabs open frantically trying to figure out what I could have possibly done so it’s somewhat comforting to hear that it’s likely just bad luck.

Definitely wasn’t anything you did. There was one other case of a bulb that popped during an operation so far that we know of. (Really was just cruddy luck.)

I am SO sorry for that bad luck…but take heart…as Jules said, they are just great about getting replacement units out very quickly.

I jumped back as the laser tube shattered

That would have freaked me out! Not easy to sleep after a shot of adrenaline!

I can only guess there was some inherent stress in the tube from manufacture. I suppose it is possible that the tube may have been stressed or damaged due to some delivery/handling trauma. Weird.
A bunch of us beta and pre-release users have put these machines through the mill, and in eight months of duty with a pre-release machine, I would describe it as robust.

When there has been a problem, support has been stellar at resolving it.

Arghhh. That’s pretty horrible. Good reflexes. And support should be in touch with you soon to get you a new machine…

Well that’s a first. So sorry it happened to you!

I agree with your assessment of the GF being a robust machine. I’ve been lurking here since I pre-ordered. Between all the usage I’ve read about, the sensors incorporated into the system, the environments it’s been tested in… this scenario didn’t even enter my mind as a possibility.

It was a shock to be sure, but there never felt like any real danger. The outer glass tube of the laser is intact and after feeling the heft of the build of the machine I’m sure everything would have been contained were the event an order of magnitude greater. 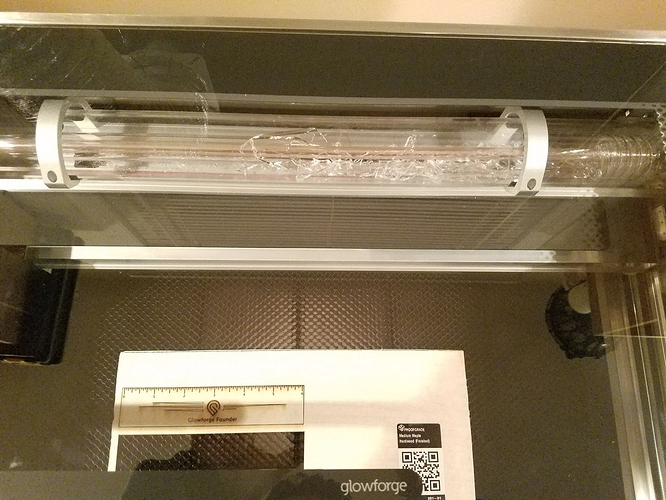 Oh no! I’m so sorry that your laser tube shattered. We’ll need to replace your unit.

I’ve followed up in an email with more details on how to proceed and we’re working on it there, so I’m going to close this topic.