I’ve had a T-shirt press for a couple of years, and was very excited to see that LaserBits (Johnson Plastics) is carrying a t-shirt transfer material that will allegedly allow us to burn away the material we would normally weed away with a vector engrave, and then simply press it to the fabric. Genius!

But I can’t get it to work!

The idea is to completely ablate what you don’t want in the design (the inside of letters for example), but not punch through the substrate. I have been trying to dial it in for hours, and I’m out of ideas. I’d love to hear from you folks if these photos give you any more ideas I can try. I’ve got a $40 sample pack of this stuff and have yet to even come close to a clean engrave.

The photo is a vector engrave of the number 45. It was 45 because I started at 45 power. The photo is from one done at 32 power (I have a Pro) and always full zooms. 45 burned away all the substrate, and 30 didn’t make it through most of the material, 31 was better and 32 power still left too much residue but blew through the substrate in many places. I’ve tried lower resolutions (this was at 675 LPI) but they were considerably more spotty. I also tried doing two lower power passes at a few different power levels, but got about the same results. So the overarching problem is that when I apply enough power to cleanly ablate the material, I blow right through the backing completely. I can’t seem to get it dialed in. 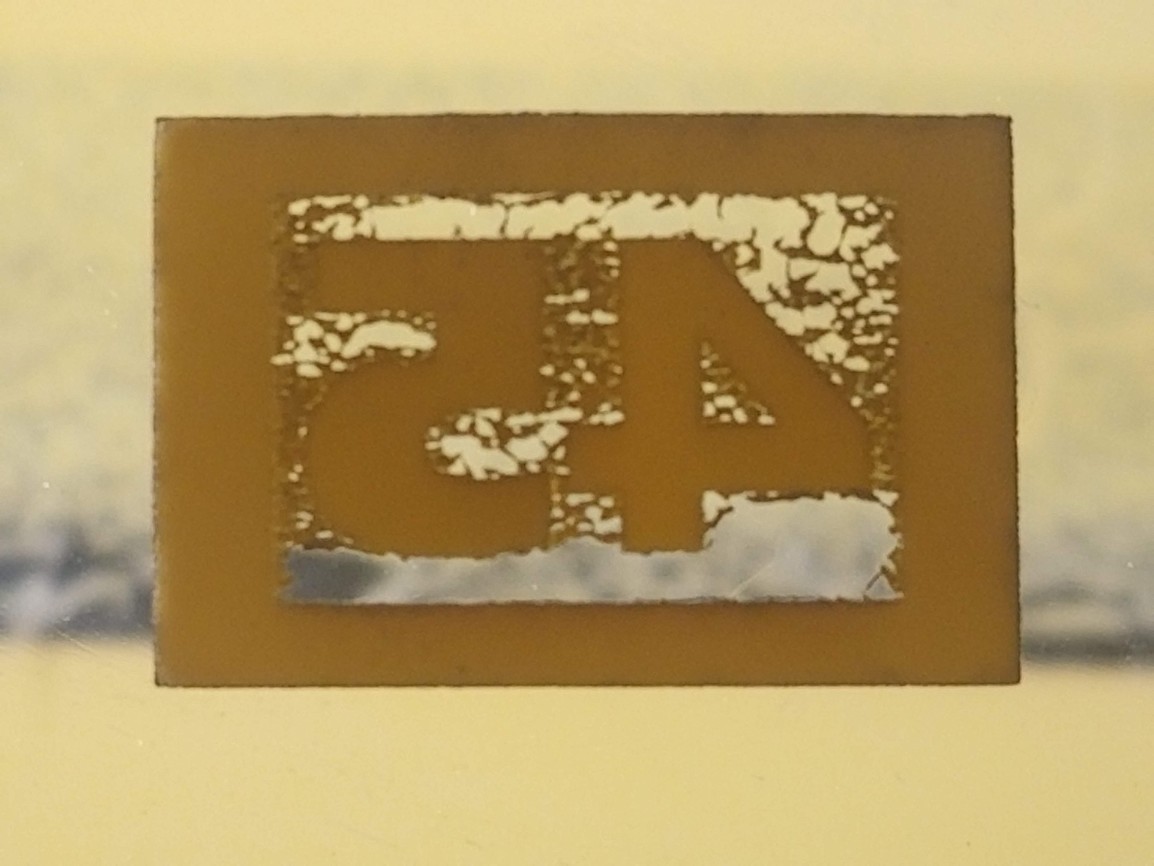 This is going to sound weird, but why not just completely burn through the substrate?

You’ll need to work up a mat. Get a sheet of cheap flat plywood, spray the everloving dickens out of it with about three good coats of Krylon Repositionable Adhesive #7020 (about ten bucks a can and you can use it to refresh the stickiness when it needs it) put the material on that - it will stick until you take it off, then go ahead and burn through it with cuts instead of engraving. Save a ton of time too. Doesn’t matter if you scorch the plywood a little bit.

Or you can buy a Seklema mat, but those are 100$ or so. The plywood mat is cheaper.

your settings seem in contrast to the recommended settings.

Have you tried defocusing? The table from @shop’s post seems to show a +.040" focal adjustment. It might also help to tack it down to another material, then you don’t get the air chamber combustion effect from the steel grid.

I thought the same thing at first Jules. Look at the 45. Two distinct numbers, and if there’s no substrate, they’re just free in the wind. A more complicated design like a field of stars or something would be pure chaos.

I’m with you Shop - that’s where I started. Turns out those are for Trotec Lasers, which run roughly 10 times faster than our GF’s. Since we’re going so much slower, we need to use less power, but it’s not a 1 for 1 thing. 50% speed doesn’t mean 50% power gives the same output. It’s complicated (I don’t understand it) and has to do with the material and Lines Per Inch and even the size of the engraving because getting the gantry to top speed (or stopping it) isn’t instantaneous. Anyway, those settings are useless for us. More power is more ablation, and I’m already blowing through the substrate.

This is interesting trackzero. I have tried it both with and without the 1mm defocus, but tacking it to something as Jules mentioned might suck the heat out of the substrate and help keep it from getting destroyed, just like the thicker a piece of metal the harder it is to mark because it’s a bigger heatsink and can prevent Cermark from changing states.

Oh, I thought you’d apply it with an application tape or something…it’s not adhesive backed?

No - the backing (I keep referring to it as the substrate) is a thin plastic. We’re applying pews directly to the vinyl (it’s not vinyl, but whatever the stuff that goes on the shirt is). Then we flip the engrave over onto the shirt, apply an iron or T-shirt press to the backing, and the “vinyl” sticks to the shirt while the backing comes away.

Yah, the whole point of heat transfer vinyl is the backing holds your design together, no need to fuss with adding transfer tape or aligning bits by hand.

I am super disappointed that this stuff wasn’t the magic I hoped for. Thanks for the update.

Maybe there is a multi-pass solution?

Adding a heat sink is worth a try too.

Maybe there is a multi-pass solution?

I’ve tried two light passes - no bueno, but perhaps in combination with the heat sink idea it might work better. I’m going to get a Seklama mat (seems like it has great applications beyond the heatsink idea), and will update this post with my results. If I can get this working reliably I’ll do a tutorial.

Hey there, did you ever get anywhere with the laserflex? I have a couple of sheets I’m dying to try but not sure where to start.

Hey there, did you ever get anywhere with the laserflex?

I did not. Couldn’t ever figure out the right ratios to do anything meaningful. If you get anything to work, please do post here.

How much do you worry of the material you are cutting when it is paper thin? I am also curious to try and do some t-shirt transfers. If I try to cut it all way through and manually put it in order on the t-shirt, do I need to worry about toxic fumes?

do I need to worry about toxic fumes?

You need to look carefully at the material you are cutting as to what material it is made of, Vinyl is a well known no-no.

Vinyl is a well known no-no

Not to be overly academic:

PVC is the problem. “Vinyl” may be other materials, and what @rbtdanforth said is true.

If you look you will find lots of posts about this. I think Sisal makes non-PVC thermal transfer sheets?

Non-PVC Vinyl? Everything Else

Has anyone found a vinyl or similar substitute (ideally adhesive) that is laser safe? I found one company (in the UK, I believe) who seems to make a chlorine-free adhesive vinyl, but I suspect they’ll only deal with a wholesale purchase, even if they’re willing to sell/ship to the US. I have a design I want to put on glass (in black, not etched), but it’s really fine and my Silhouette is tearing it up. In desperation, I can try to mask it and paint it on, but I’d just prefer vinyl.

Siser Easyweed. And, yes, if you search, there’s a thread about trying to dial in the settings. There has been mixed success with it.

There has been mixed success with it.

I was never able to get it to work. Meanwhile, my wife found a used Cricut she wanted on e-Bay, so I just ended up using that to make T-Shirt transfers.

If I try to cut it all way through and manually put it in order on the t-shirt, do I need to worry about toxic fumes?

The particular material this thread is about (Laserflex), is made to be burned with a laser, so I don’t have any toxicity concerns. PVC is the big no no and there isn’t any of that in Laserflex.