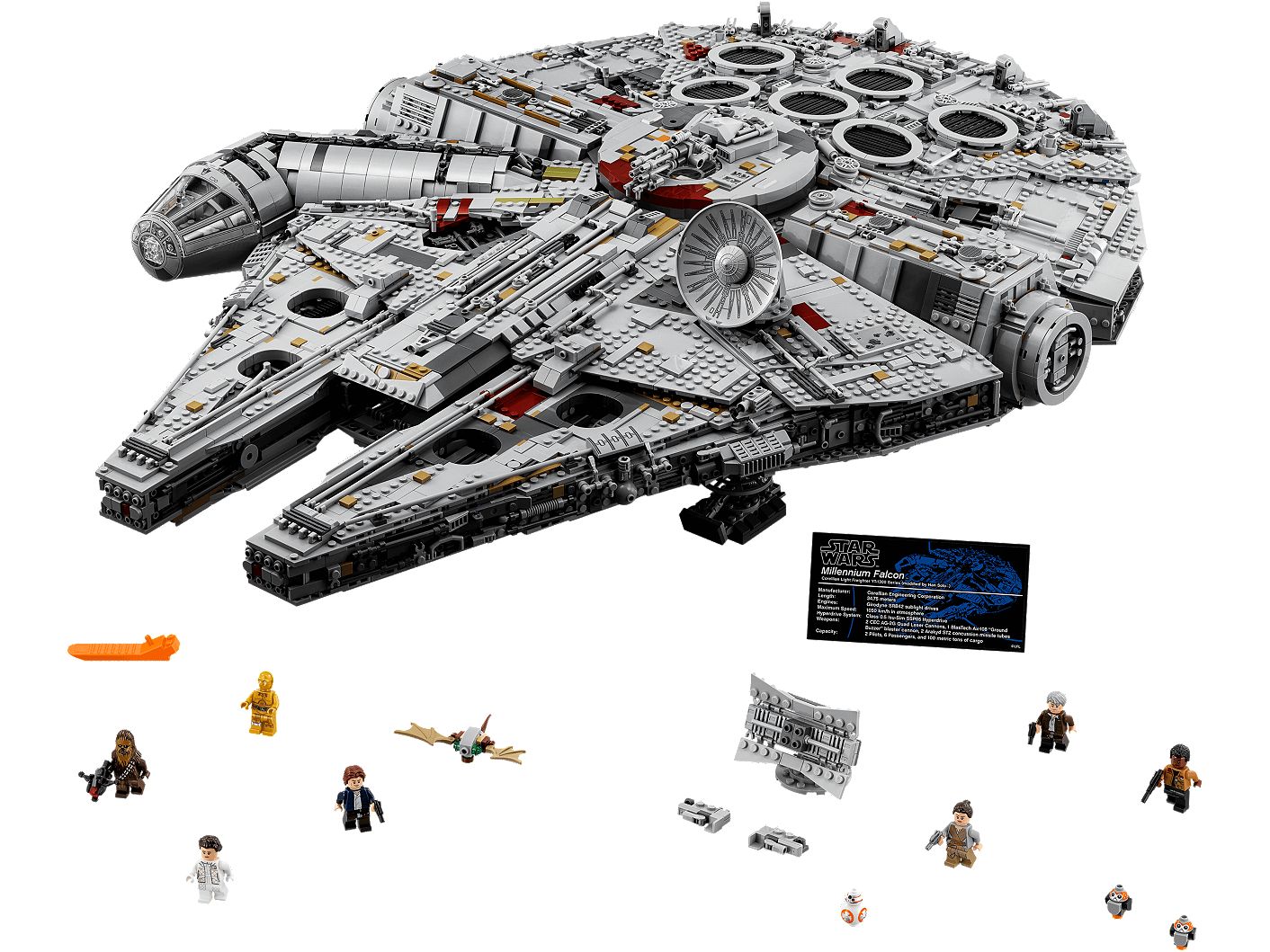 Travel the LEGO® galaxy in the ultimate Millennium Falcon!

I love the fact that you can swap out the dish and have either the ESB version or the Force Awakens version and it comes with the mini-figs for both!

Being an adult is awesome because I can afford sets like this and awful because I know that money should go to something like car repairs.

Wonder what it weighs

As an adult, you’ve gained the ability to justify such purchases. Do it. You know you want to. It’s a frickin’ Millennium Falcon! If you car breaks, ride your bike.

I found a thing online that said an average pound of mixed LEGO has around 200 pieces. Based on that, this set would weigh around 38 lbs.

Only if you’re a single adult.

Wonder what it weighs

My wife just sent me a link to it and that was my first thought too - not how much it costs, but how much it weighs. (which is odd because I can lift way more than I can afford to pay)

Chalk this up as another thing my newborn son needs.

I built up the Lego Saturn V a bit ago (video here, if curious: https://youtu.be/gOH7GTvOmp0) and that was plenty big enough. I love Lego and so do my kids, but $800 is deep into crazy-town and I’d have to use the spot for the Glowforge to display it, and that ain’t happening!

The largest ever LEGO set comes out on my 40th birthday? I think that’s a sign. A sign that I’m about to be $800 poorer.

(Unless someone wants to buy me a birthday present…)

If you join the Lego VIP program it will be available Sept. 14th.

You guys obviously not in the drafting business, we had a saying “the only thing a draftsman can’t afford is a day without pay” HAH

Being single does have its perks!

If you join the Lego VIP program it will be available Sept. 14th.

Oh, I’ve had a LEGO VIP card since the day that program began. But I won’t buy the Millennium Falcon until October because they always have double VIP points in October. And at $800 this is one set where waiting for double VIP points is very much worth it.

Assuming they are still actually available in October.

I am very tempted, but I’ll probably end up getting the new 1/72 Bandai kit, it’s also being released in October in the US. It’s already out in Japan, so people have been posting pictures of the the sprue trees and it’s GLORIUS!!! They even sculpted in all the blast marks…

(Unless someone wants to buy me a birthday present…)

So, I’ve got several of the LEGO UCS Star Wars sets, and by far my favorite (so far?) is the UCS Millenium Falcon.

Shortly after I finished putting it together:

I got mine about 10 years ago when they went out of production, and they were running about $500 retail (I found mine for $400). At the time, it was the second largest (in terms of piece count) set (first was a Taj Mahal set, I believe). This new set is a couple thousand pieces larger, but essentially the same physical dimensions. It looks like most of what’s new is detail pieces around the skin and, of course, the interchangeable dish. There’s been speculation since Episode 7 came out about an updated Falcon set with the rectangular dish – i have to admit I wasn’t expecting an ‘interchangeable’ set.
One piece of trivia: the only piece on the original set that cannot be purchased individually is the large, round dish. I’ve seen that single piece go on eBay for around $100. Original, un-opened sets are (were?) going for up to $2000 – I imagine this set will hurt that aftermarket for awhile.

And yes, I’ll be buying this one, too, though that price tag is gonna’ sting for awhile!

And yes, I’ll be buying this one, too, though that price tag is gonna’ sting for awhile!

Buy two and keep one unopened. In a few (not that many) years, it will pay for the first