Lessons for the Glowforge team about the forum

I think they should make a beginner’s area here, and let the regulars who want to participate there move topics into it as needed and make the same kinds of replies they do now. 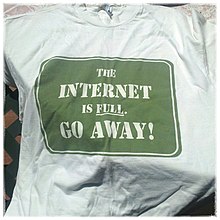 Eternal September or the September that never ended is Usenet slang for a period beginning in September 1993, the month that Internet service provider America Online (AOL) began offering Usenet access to its many users, overwhelming the existing culture for online forums. Before then, Usenet was largely restricted to colleges, universities, and other research institutions. Every September, many incoming students would acquire access to Usenet for the first time, taking time to become accustomed ...

Am I crazy? Everything Else

Mandela Effect? Never heard that term before (looked it up, learned something new). Feels like Eternal September sometimes.

A reminder for everyone Everything Else

I’ll add that everyone knows about the manual but I’d say fewer know about the forum rules: https://community.glowforge.com/faq Ideally we’re in eternal September here, it’s necessary if GF is to thrive.

My thought on this is, hey, this is an internet forum. Worrying about “wasting time” is a moot point.

The folks seeking help likely drop their question online then go about life for a bit and check back later. The folks who are here for discussions and answering said topics, well that’s basically being here for the entertainment value and that’s pretty much the definition for burning free time.

I don’t post a whole lot anymore for help topics, not because I don’t care or can’t be bothered, but because there’s a ton of new people coming up that can help with the basic stuff. I’m here for the tricky stuff

and really my time to be here is cut down anyway just with life and projects at home.

To get a little irked, frustrated or irritated with repeat stuff is human. Yeah, it would be great if everybody read manuals or dug deep for information, or were self-starters that even knew how to find those resources but in general, people don’t. They need to be a bit spoon-fed. However, they don’t know what they havent experienced, you simply can’t fault them for that. When those that are more knowledgable about something get actually annoyed for realz, it’s more of a reflection on them than it is the person asking the question.

So, help if ya can, don’t if ya cant or don’t wanna. No bigs. You can read it, roll yer eyes and move on to another post if ya wish.

My two-cents on the whole “they didn’t search before posting” mentality is that they probably did. The last time I searched for something I found 15 different answers for 15 different ever so slightly different problems, none of which were my problem. Now, granted, that pointed me in the right direction. But if it didn’t, I would have posted, and probably forgot to mention the fully amount of previous work.

I find Discourse’s search very difficult to find specific posts when I know for certain they are there. It is not surprising people ask the same questions again and again.

It is also symptomatic of GF’s refusal to document anything properly, hiding everything and only supporting Proofgrade. Also the many bugs and workarounds needed to get it to accept SVGs and lack of error messages. For a supposedly easy to use machine there are many pitfalls.

I agree wholeheartedly that the forum is difficult to search.

Workbench recommendations for putting glowforge on? Everything Else

No apologies needed! I am pretty sure there are threads about how searching discourse kind of stinks.

Glowforge Materials Wiki -- let's do it! Beyond the Manual

Sadly this is only going to be as useful as it is official… and gf is obviously very reluctant to speak officially on this subject. I fear there won’t ever be a simple, thorough wiki at this point, discourse and its awful searchability is all we’ve got for the foreseeable future.

FAQ (for real) Problems and Support

One hundred percent this. I’m all for being helpful but discourse has proven to be not so great as a searchable resource. As such everyone asks the same things and it’s definitely a drain on all of us. While we have (and should have) the matrix, it is also a jungle full of inconsistent styles and with very little organization. As a new user I was always looking for a more authoritative-sounding resource. I’ve been calling for an officially curated help section for a while, I totally agree th…

I agree that there are some people who have tried to search before posting, but there are also people who definitely didn’t – either because of cluelessness (which I forgive and have done myself) or laziness (which irks me greatly).

There’s no great technical solution to humans being humans, but I’m saying that now’s the time to consider the future of things so that the community doesn’t start to falter as we mature and grow. Thinking about how to best serve our newest users pays massive dividends later as they become experienced users with their own great ideas and we all benefit from the diverse skills and perspectives that they bring.

Also, not to get on a tangent, but facebook splintering our userbase is a shame. We’d be better off with a single community I think. Critical mass is a real thing with community size. I would also say that now’s the time to try to think of ways to entice people to come here instead.

I’ve been here since the beginning and even I still have that trouble once in a while. At which point I will post a question. I’d say that 99% of the time it had been addressed, but I couldn’t find it using a search.

why did you buy a laser cutter in the first place?”

I think one thing that hurts is the separation of this forum and things like this:
https://glowforge.com/support/topic/troubleshooting/how_we_troubleshoot

If all of the sites were more cohesive it would make finding useful information easier for all.

The irony here is that you illustrated my point: There is a great deal of basic stuff that prevents you from participating by way of eating up your limited time.

So, to get back to my original point: there are things we can do to make the forum more welcoming and helpful to new users while also ensuring that remains useful and fun to more experienced users. I think now is the time to consider these things, so we don’t go too far down an unintended path.

As this is a functional attempt to introduce the masses to a hobby laser there are, by nature going to be a massive influx of people like me. No idea.
I think the problems and support area should have a pinned format for submitting questions that asks for all the pertinent information and is to be filled out in order to save those willing to help from having to query for the details.

The incomplete sentences kill me.

I’m in the same position…knew nothing about lasers…nothing…but still bought one.

I didn’t - but I knew the difference between bitmaps and vector graphics, and that “cutting out a bitmap” would require vectors of some sort, for example. Then I did some research, like what the limits of CO2-lasers are (doesn’t do anything to metal, don’t try to cut PVC and so on), and then I pulled the trigger. Mind you, I still have an awful lot to learn… but that’s the fun part, innit?

“If you don’t know the answer to <question>, why did you buy a laser cutter in the first place?”

From the glowforge.com front page:
“Make magical things at the push of a button.”
“12 revolutionary features that give you creative laser superpowers”
“Not a designer? Meet our catalog.”

The Glowforge is specifically marketed to non-geeks, therefore it is going to be purchased by non-geeks. You surely saw the promotional videos. They make the Glowforge look about as difficult to use as a toaster.

Don’t blame the newbs for not knowing, respect them for asking.

but I knew the difference between bitmaps and vector graphics, and that “cutting out a bitmap” would require vectors of some sort, for example. Then I did some research, like what the limits of CO2-lasers are (doesn’t do anything to metal, don’t try to cut PVC and so on), and then I pulled the trigger.

I can respect all that, but I think you were coming from an entirely different place than many of the rest of us. I never knew ANYthing about vectors and bitmaps…and even less about lasers. All I knew was that I really wanted to make cool things…then spent the next 2 years + after I bought it, here on the forum learning from all the amazingly smart people on here.

then spent the next 2 years + after I bought it, here on the forum learning from all the amazingly smart people on here.

but this is the key sentence in all of that. you didn’t wait 2+ years and then when it showed up on your door, say, “ok, now what?”

not that i expect everyone who orders a GF to spend months on the boards here reading and learning, but i’m still surprised at how many people didn’t do anything to prepare.