Continuing the discussion from Edited Today:

this convo made me realize that we have a number of different people who play instruments (and not just the handful who have made some on their glowforges).

so let’s see what you’ve got?

here are my guitars. all of which i played never more than competently, nowadays less than competently, relying quite a bit on distortion to cover up my mistakes. i make my hay musically with a microphone (not pictured). 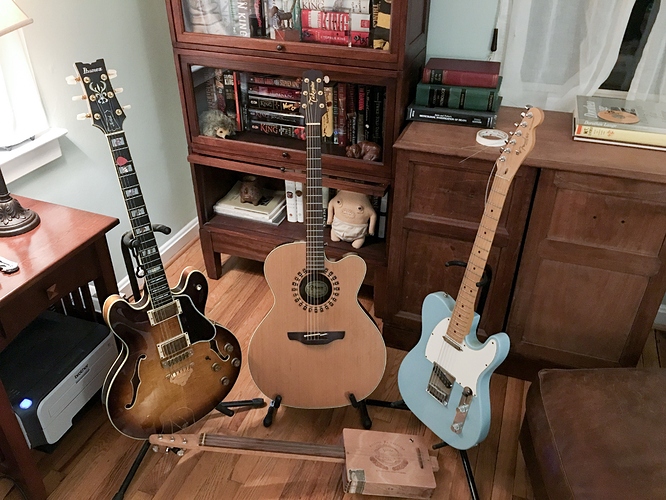 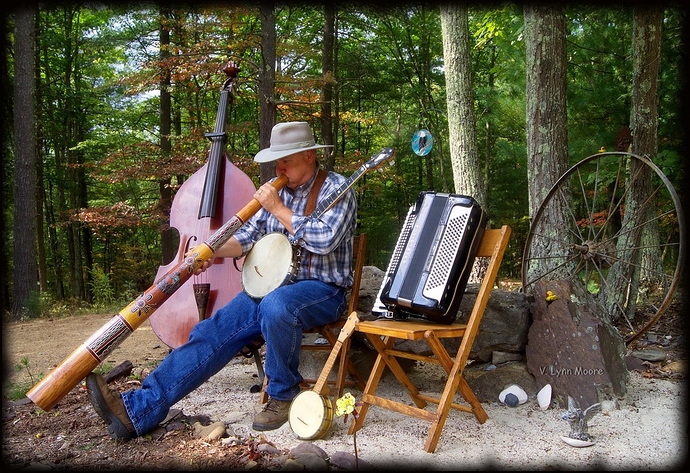 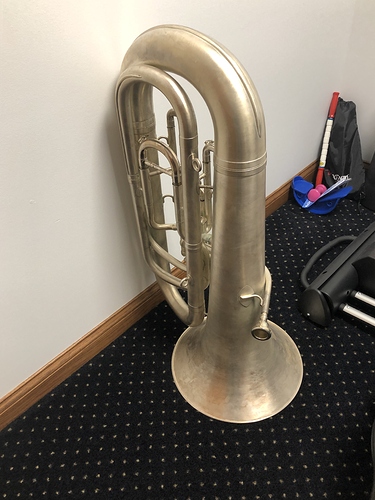 Well, that’s just the horn I bought to practice on…

Here are a few of me with the DCI 2010 Star of Indiana Alumni Corps… one of the best events I’ve ever been part of. First few are early rehearsal camps, followed by our final practice in Lucas Oil Stadium. 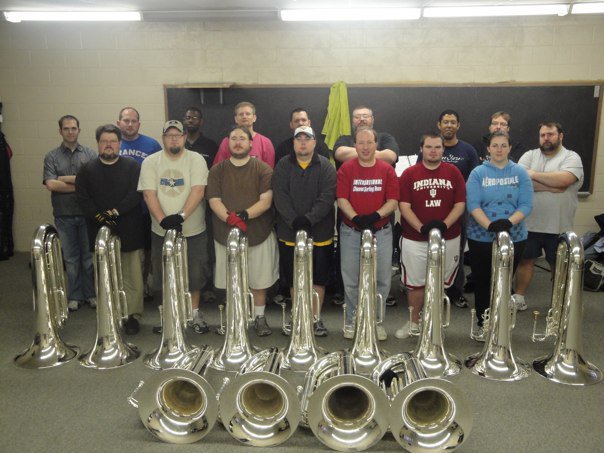 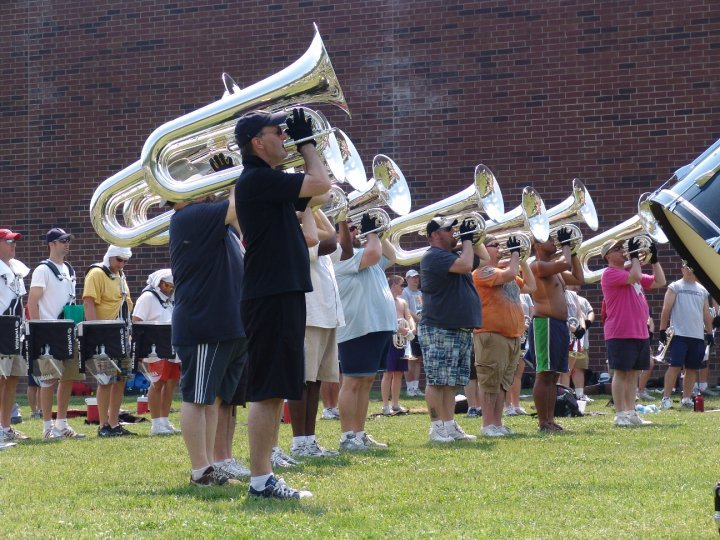 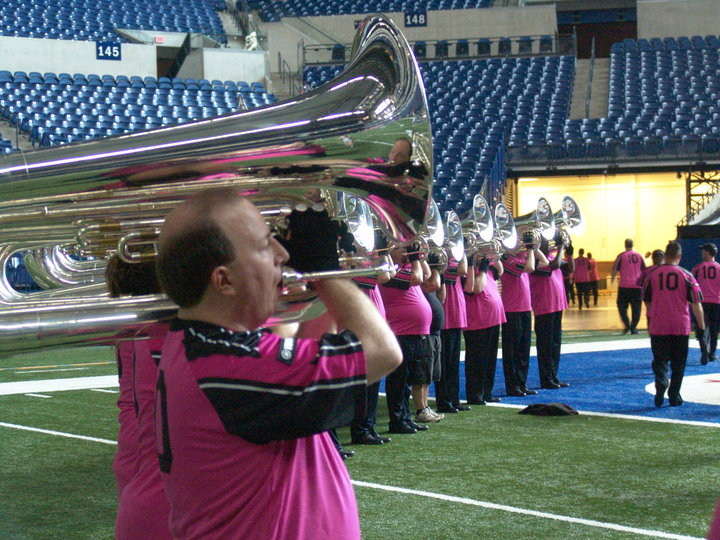 Yes, that’s me in the foreground. I’m in shape… Round is a shape!

If you want to hear the group, just search YouTube for Star of Indiana alumni. (And turn up the volume!)

Y’all have seen my autoharp, since I used the GF to fix its buttons.

But this is my main axe: 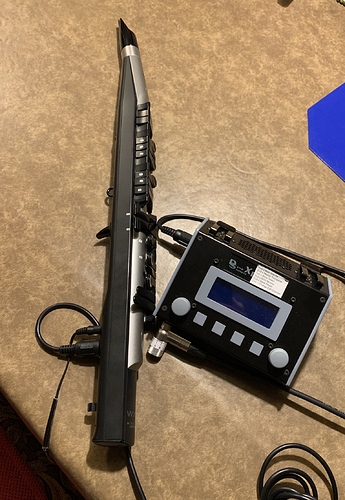 Yamaha WX5 wind controller with DynaSample XpressO synthesizer. I also have an EWI5000 (but still haven’t learned to play it yet) and a Yamaha Motif-XS synthesizer.

An acoustic electric Taylor guitar, an embarrassingly high number of ukuleles, some keyboards, a piano… a trumpet, an ocarina, an mbira, some recorders… conga drums and a cajon… a partridge in a pear tree. It’s too dark to take photos of my haul at the moment. 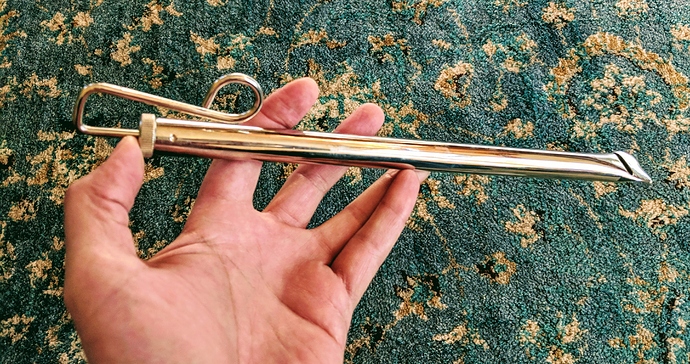 An anonymous gift from some years ago. I’ve performed for crowded rooms! (It normally solves the problem.)

The other “instrument” I occasionally play are my hands - “hand whistling” - and while you wouldn’t really want to hear ME play, my uncle, who taught me to play, is amazing. He was featured in an article in Smithsonian Magazine, was on Real People, and was a seven-time champion in the Classical Division of the International Whistle-Off. He is truly amazing, and has a 2 1/2 octave range.

He has a number of videos on YouTube, so I thought I would share one of his shorter ones (about 2 1/2 minutes) which is one of my favorites, Bugler’s Holiday.

Wow! Didn’t even know this was possible. (Need to show hubs…he’s impressed by the “Gone Fishing” whistling on the Andy Griffith theme.)

Amazing! If you approach even 10% of his ability you must be pretty good yourself!

If you pull up his other videos on YouTube, I’d suggest watching the Barber of Seville. Of course, I always picture Bugs Bunny… but Pete really does a spectacular job on it.

I have a small room full of percussion equipment, including a djembe, a cajón, paddle drums, a flower drum, assorted singing bowls/gongs, rasps, a pentatonic xylophone, suzu, and mokogyo. More than anything, though, I play the hirado: 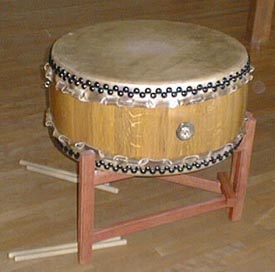 I have messed around with multi-track recording a little. A while back, I did a piece inspired by a Japanese matsuri (festival music) to use as background music for a video:

It fairly repetitive. So, feel free to punch out early if you hit play for that.

i did some multitrack digital recording about 20-25 years ago when i was in bands. my skills were pretty mediocre (at best), but i still have that 16 track akai upstairs somewhere. computers have rendered it a dinosaur and it recorded onto 1gb Jazz cartridges or you could connect a SCSI hard drive (also dinosaurs).

Wow! I just got rid of the last stashed Jazz cartridges here.

I started messing around with recording using MiniDisc equipment and some funky bespoke binaural microphones but, only managed to do anything multitrack more recently. I am now just recording directly from an Audio Technica microphone into Reaper running on a MacBook Pro.

i haven’t recorded anything for real in 10 years, and that was in someone else’s home studio. and more like 18-19 years ago in a couple of different pro studios.

i appreciate the things they did in the home studios, but the big pro studios with tons of outboard gear and a crapload of different mics to try changes things. that and having a very experienced recording engineer who really knows his stuff.

So maybe not a shot of all our musical instruments but here is a shot of our studio. some things were actually made on the glowforge too. XLR snake boxes, microphone shock mounts and drum triggers.

Wow, impressive! How are the acoustics with those raftered ceilings?

Actually quite good. The joists act like a diffuser. The other thing that helps is sound control on the walls. We have OC 703 panels inside the coffee bags.