Lid detached from back left hinge

[Edit: Updated to include photos]
Our Glowforge arrived yesterday, and as we unboxed it and set it up, all looked well and intact. We fired it up, ran through the first few suggested test prints, and called it a night.
Tonight I got home eager to try some more prints, and upon lifting the lid to insert some Proofgrade material, noticed that it seemed a little out of square to the top of the machine. Looking closer, it appeared that on the left side near the back it wasn’t flush with the rest of the top surface. 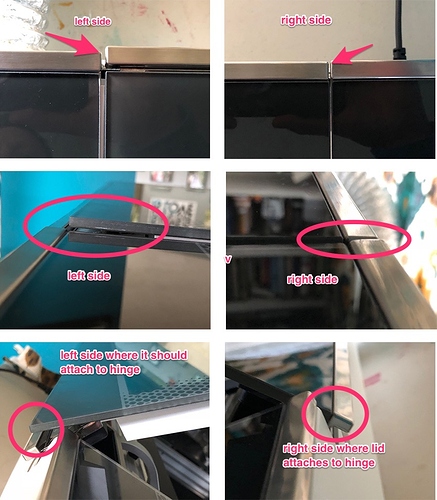 lid_hinge_attachment_comparison-markedup.jpg832×950 168 KB
I gently lifted it up to find that in the back left of the lid surface it was not fully touching the metal plate attached to the internal lid hinge on the left side. Easing it up just enough to see inside, it appears that the glue holding the lid top glass sheet to the metal plate that is bolted to the hinge has detached. 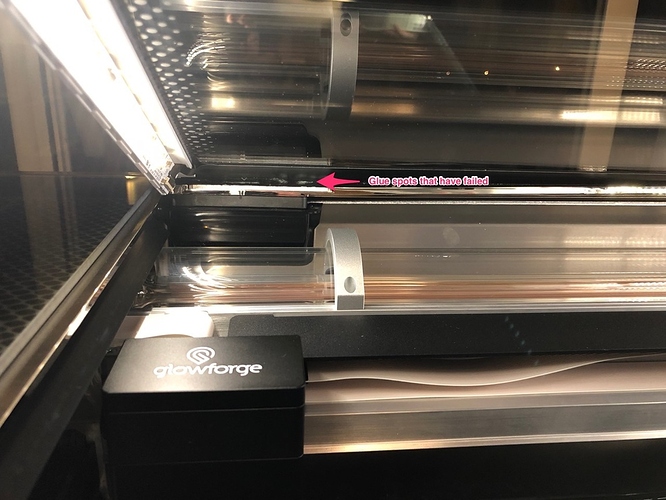 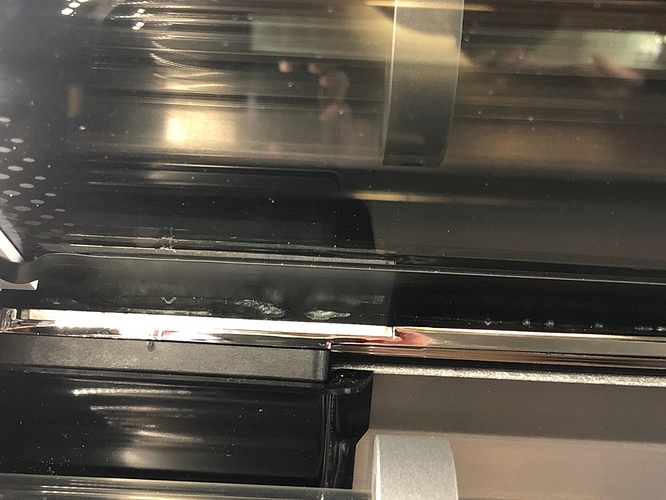 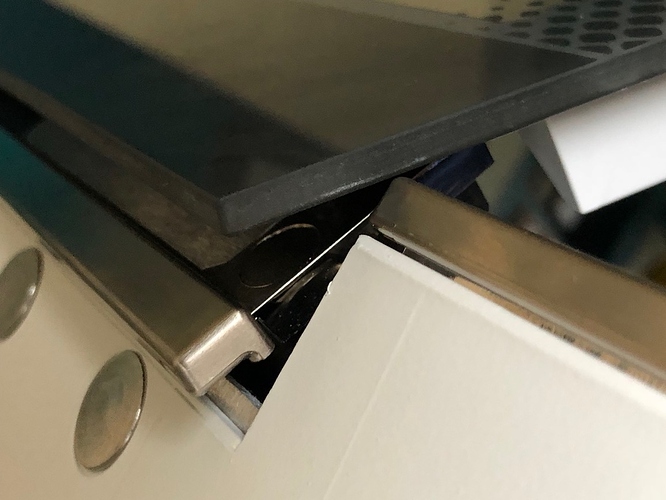 IMG_9577.jpg1154×866 157 KB
So now I’m hesitant to open the lid even far enough to insert any materials, as it looks like if I open it all the way, the glue will detach from those metal plates all across the back, and it would come loose entirely from where it secures to the hinges. Meaning, of course, that I would not be able to open or close the lid normally at all.
I’m hoping that there is a fix, but I’m fearing that this means we’ll have to send our Glowforge back after only one day and a couple hours of total use. I have only opened and shut the lid perhaps 10-12 [Edited after recount of usage on first night] times total after initial setup, so this seems very much like an issue with manufacturing.
Please help with any support for fixing it that we could manage, or…if need be I hope we can get a replacement sooner than later! After two years of waiting, and then getting our actual ship date bumped no less than four times, we were beyond excited to finally receive our Glowforge yesterday…and are now really bummed we can’t safely use it without fear of the lid coming off.
3 Likes
Loose hinge not letting lid sit flush
leahgee2 January 10, 2018, 4:34pm #2

you are not the first one… my unit arrived with the front detached and a few others have complained about the same issue. I received a reply telling me that I have to send it back, and I’m sure that’s what they will tell you. although I replied to them last friday and I haven’t heard back since… despite sending a few emails.

I’m guessing glowforge support is overworked and overwhelmed… the glue failure is in my opinion related to the cold snap.
the top is glass, but it has a coat of black paint, so that’s what’s holding on to the glue. the failure line is between the glue and that paint.

my worry was that reglueing the glass might affect alignment or calibration, otherwise I’d glue it back myself.
I’d love to hear the staff’s opinion on that…

Take heart…they will get you taken care of very quickly. I had to return my PRU with the same problem last summer, but they got my own machine out to me right away.

related to the cold snap

Perhaps, but not necessarily…as mine happened during the hottest time of the year.

That’s a bummer to hear. Given that the unit otherwise works perfectly, calibrates itself, and is a dream to use functionally…it’s really disheartening to think that with all the precision that the point of failure is in the glue used to attach the lid to the hinges.
We’re north of Seattle in Washington, so our weather has not been that bad at all. Since it shipped from just down south in California, I can’t imagine that it would have gotten cold enough to affect the glue.
It really looks like there are only about three dots of glue to hold that entire side of the lid to the hinge - each only about maybe a half-inch in diameter if that…
Thanks for your feedback though - I’m glad in some respect that we’re not entirely alone in this obvious manufacturing defect.

Good to know. I hope we can get a replacement soon! After all this waiting, and then waiting some more after multiple bumped ship dates, we are just so excited to finally be able to start making products for our retail store and offering laser services - it was to be our huge marketing push for the new year…and now we have to wait some more.
I don’t think it has anything to do with hot or cold weather…I think it’s just not enough glue/epoxy or whatever they used…I think we’ve done all of six prints with it thus far, plus initial setup…so it’s not like we’ve been opening and shutting the lid hundreds or thousands of times…not even a dozen times in my best recollection of our use in two day’s time.

Same happened with mine but on the other side. GF was very quick to get mine replaced also, so hope they get to you quick. They really should look at that process with the glue since it seems to be a pretty common issue whether the hinge or the front lid handle. I wonder if they are packing the inside to tight causing pressure to pop the uncured glue.

Oh no! I’m so sorry that happened.

Like others have mentioned, I suggest we replace your unit. I’ll be in touch shortly via email to sort out the details.