Using Proof-grade Medium Clear Acrylic, while printing the same item, sometimes it comes out with this banding/lines in the engraving. The line goes all the way horizontally through the engrave. I am using the SD graphic preset with no alterations, very “plug and play” The file is an SVG that i can assure you has no elements that could be creating this. Any ideas? Thanks! 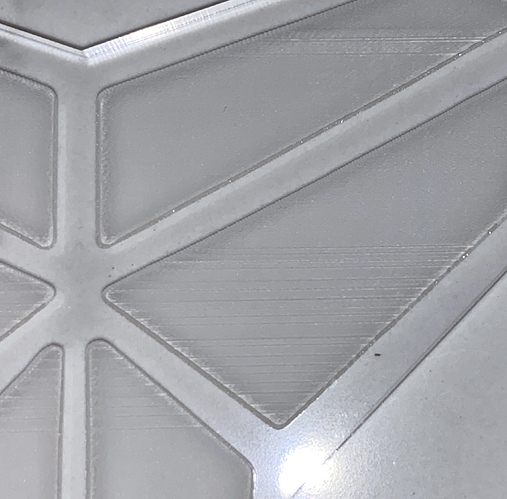 What you are seeing are artifacts from the raster lines as it sweeps back and forth on an engrave. Depending on your LPI and power and speed, these can be more or less pronounced.

Reading this topic and others like it to see if it helps.

Thats fantastic, thanks! Its strange how sometimes and some sections look fine and then others look terrible. Also someone asked it in the previous thread but it wasn’t addressed, do then reset the laser to do the cut afterward at actual height or can you do cut at defocus as well?

I’m pretty sure this is engrave errors due to poor temperature/power management by your unit. Do you have a basic/plus or a pro?

I have Basic, the original unit via crowdfunding.

A defocused cut will still cut…probably, but the line will be way wider than normal - best to keep that focused correctly. 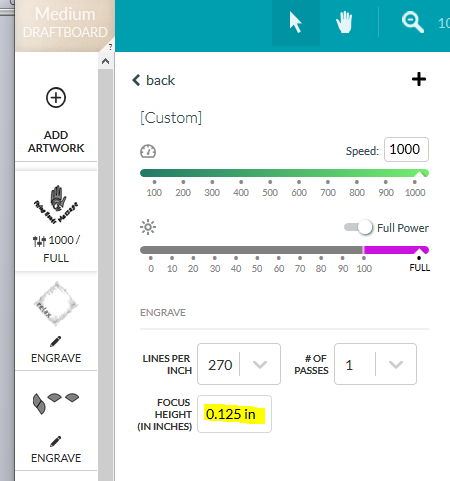 To answer this question, you can set heights for each part of the job individually. So you can tell it to engrave defocused and then cut at the correct height.

While refocusing might reduce those lines, it ultimately will not get rid of them completely, as your unit is experiencing an error that needs to be remedied by support.

Ok that makes sense with defocusing for each action. I e-mailed support and will see what they come back with.

Are those lines in your piece taller than the rest of the engraved area or deeper?

The first one would suggest temperature issues, the second one issues with maybe missed steps, but I don’t think that’s it

You shouldn’t email support after posting here - you’ve already opened a ticket. Now you’ve opened two, so they will come here and close this one before they respond to your email.

Next time do one or the other

I figured as much. You’re experiencing some power loss. In most lasers this is due to temperature regulation issues, but that is generally indicated by a band of weaker engraving that slowly fades back to regular. To be having just a single line at a time points to something else strange in the power chain here.

I don’t know enough to tell you exactly what is failing here, but I can tell you it’s nothing you are doing wrong. It’s probably a hardware error, or a hardware issue caused by incorrect settings being sent down from the cloud.

I’m not sure if support will give you a really detailed answer or anything, but I can say this shouldn’t be happening.

Thanks for your quick responses, sounds like i may be stuck between a rock and hard place. Hopefully support can figure it out and defocusing the laser will be a good short term solution.

Is that a vector engrave or a raster engrave? Sometimes rasterizing the image at a high PPI will do away with those…they are discrete and spaced far enough apart for me to think they are an artifact of the way the program interprets movement on certain vector files. (It might not be just an issue that defocusing will take care of.)

Don’t know what causes it, but it’s happened a couple of times. Or you could try rotating the image on the bed - that sometimes also eliminates them.

your unit is experiencing an error that needs to be remedied by support.

I think this would fall into the category of being too authoritative…only Glowforge Staff can say this for sure.

— “This is an issue only Glowforge can fix”

— “No, only Glowforge has the solution”

Just saying that we can’t speak for Glowforge; telling someone their machine has to be replaced is outside our “scope” as non-staff members.

Be careful not to state opinions as facts. For example, imagine that we posted we were moving Glowforge world headquarters to Antarctica. “I think they said they’re moving to Alaska” is an OK (if incorrect) post, assuming that’s what you thought you heard. “Glowforge said they’re moving to Antarctica, but I don’t believe it”, is also OK. However, “Glowforge is moving to Arkansas” is a post that will need to be flagged and edited, since it states something as a fact which is either a mistake, or speculation disguised as fact.

I didn’t say the machine needed to be replaced. I said it looks like a hardware issue or it could be something wrong with the power/temperature management software system on board.

What I did intend to imply though, was whether this is one or the other, support would be have to be involved, either to have the unit fixed, or to start a software modification change. I don’t believe it’s a user fixable issue.

However, I will say Jules’ answer did make a little sense, as I’ve seen graphical errors from slightly resizing raster images by accident before engraving. It seems a little less likely in this case due to where the issues begin and exist within this engrave, as they show telltale signs of thermal/power issues.

Okay, I must have misread, sorry about that.