I’ve found an old topic where lots of small circles confuses the GF, from 2018. I also know I’ve had this problem before but I can’t remember what I did to pass it?

I’m having a box made in paper with a pattern of gridded circles on it. The GF accelerate at a speed where the circles are no longer round and not properly cut through. What do I do? 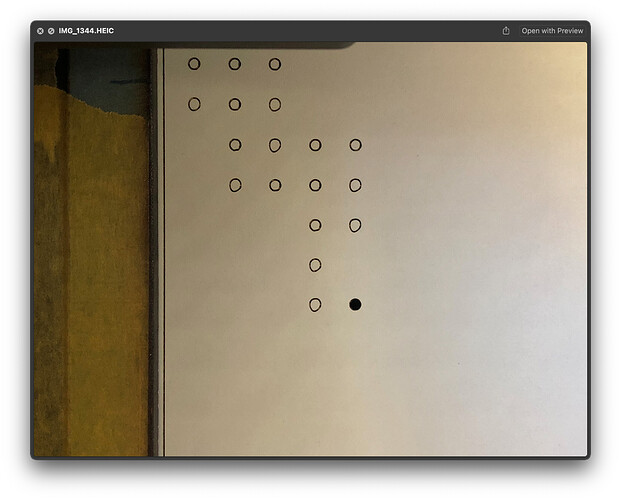 That actually looks to me like a mechanical issue. Easiest solution is maybe there’s debris on your belt or rails. Next easiest is belt tension (see the support page for how to adjust it), and most annoying is if you have a cracked wheel or your pulley wheel is slipping down during printing (it should be up tight against the gantry).

2018 it was a bug, thought it might be gone by now but I don’t think so. Easiest fix is going down to 300 in speed. It still does the accelerating at random but it’s at least slow enough for it not to laser irregular. But would be nice to know what to do differently?

Maybe, but I’d check the mechanical stuff just to be sure. I haven’t run into it when doing similar operations, and haven’t seen any similar complaints in a very long time. I’d expect them to have squashed the bug long since.

That’s a mechanical issue. Belts, wheels, or pulleys is where that issue comes from.

I have had a similar issue before as well. When doing a bunch of circles jumping from one to another sometimes it would speed up dramatically and cause these deformed circles. I adjusted the power settings down so when it was acting normal it would cut out and when it was being strange it would leave the circle in place to see it easier. 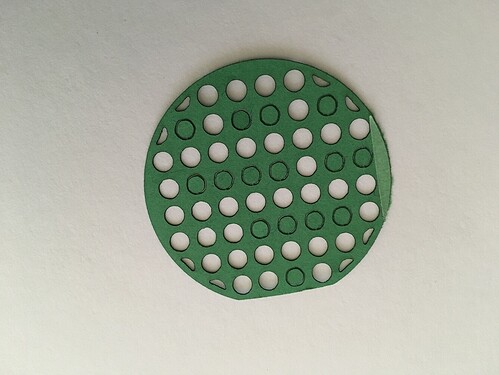 that is really odd.

include the times you did that print, so they can pull your logs!

This was back in 2019, talked to support then but cant remember what came from it. I just stopped cutting things with lots of holes in a grid pattern like that at higher speeds. Mainly just trying to add some info if possible without hijacking the topic heh

I’ve cut several cribbage board templates in the past and all the holes were perfect.

The masks I cut have literally hundreds of little circles with no issues - so I think whatever the bug was it was killed by mid 2020.

One potential solution (if I’m remembering correctly, and it’s been a while) might be to add nodes to the circles.

Some drawing programs use very few nodes when creating circles. and normally that’s a good thing, since it speeds up the processing time. But the GF software is creating travel paths that go from node to node…if your circles have at least 4 nodes in them defining the shape, it forces compliance from the motion plan. It’s going to slow things down a little and might eliminate bouncing. (No promises.)

So if you are using Illustrator, adding nodes is a couple of clicks…select the circles and click Object > Path > Add Anchor Points. It inserts one anchor point between each existing pair. That should do it.

If you’re using something else, check to see if it’s possible to add a couple of anchor points, or just do it for one circle before copy/pasting it into your array.

Yes I´m using Illustrator and will try that when I´m back at work tomorrow! I tried looking for an old post I read last time it happened but couldnt find it, only an other one from 2018. (I solved it ok with lowering speed to 300 instead of 500 but it is always annoying when you don´t know why something is happening…) Another quick question since you are here and usually have answers… Did something change recently with when you are adding a file with a lot of objects? It says it grouped objects and then I couldn´t delete totally separate objects from the workspace. Never had that problem before. (Of course a quick fix to resave it diffrently but also good to know…)

Yes lowering speed fixed it for me as well but with many holes you always hope to speed things up a bit… I also don´t know how I fixed it last time, with years apart it is just weirdly familiar but without answers…

There were some rule changes on that a few months ago I believe, but I’m not currently aware of any changes to grouping beyond that. (Which means nothing…I’ve been unable to play much these last few months, so it might have changed and I don’t know about it.)

Hello @evelina, Thank you for reaching out to us. While the issue might be settings related, based on the looks of the circles in your photo it does look as though there may be a mechanical issue at play here. In addition to checking your settings, I’d like to have you check a few areas inside your unit as well, just in case.

To start, I’d like to have you check the tension of your belts. When pressing lightly on one side of the belt, the other side should not move.

If the belt tensions are good, next I’d like to get a few photos from you:

1.The belt under your laser arm with the head pushed to the left:
​

​Finally, check the wheels on your carriage plate for any cracks or damage following these steps.

Please let us know what you find. Thank you!

yes this is the behaviour of mine as well

I made a quick check before I left the office for debris on rails and belts as geek2nurse suggested and cleaned them a bit. After watching the animated pic now I think they might be a bit loose. The other stuff will have to wait until I get back to the office. But you mean that this can cause the weird behaviour posted by primal_healer above?

Because your circles are somewhat elongated, unlike primal_healer’s photo above, that is what leads me to believe the issue is mechanical. My guess is that it is likely a loose belt, but I wanted to provide the full list of possibilities just in case. Please let me know what you find. Thanks!

Did something change recently with when you are adding a file with a lot of objects?

The grouping thing has been around for a while. It’s highly annoying.

I’ve learned to upload such files in multiple parts to keep that from happening.