A lot of this started in the ArtPrint Linoleum thread, but thought it would be wise to move to its own topic for Grey/Gray Low Odor Laser Rubber for Stamps. ( Post with links for buying )

Settings I used on a Pro GF to produce successful stamps:

(edit) These are the settings I use now that are pretty successful for me(end edit)
It makes a lot of white powder that turns into flames and sparks when it moves onto the cut phase. The circled bits in the photo are where the dust turned to flames during the cut action.
Maybe cut first, then engrave? Or engrave, ignore the cut, open it up and lightly vacuum the dust, then do the ignore Engrave/Start Cut sort of thing. Tape it down of course to keep it from moving. 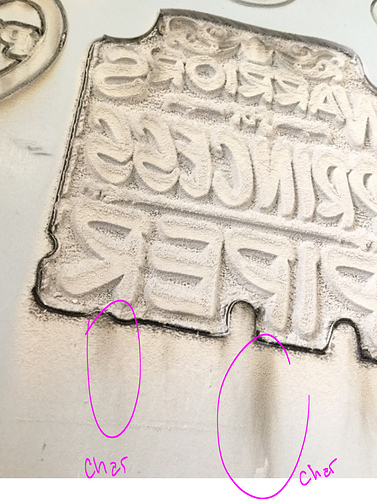 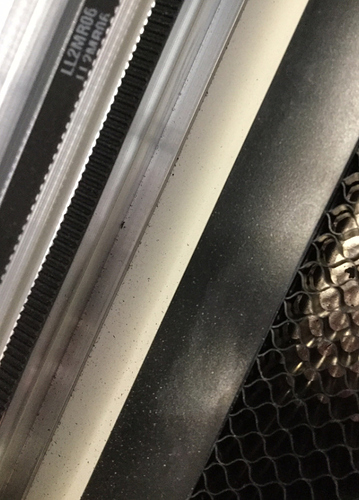 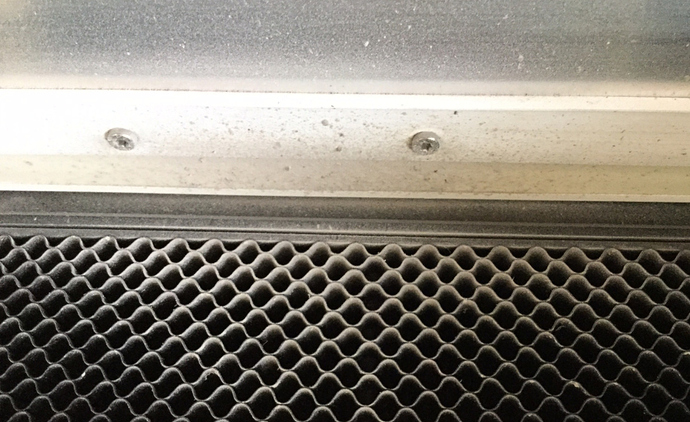 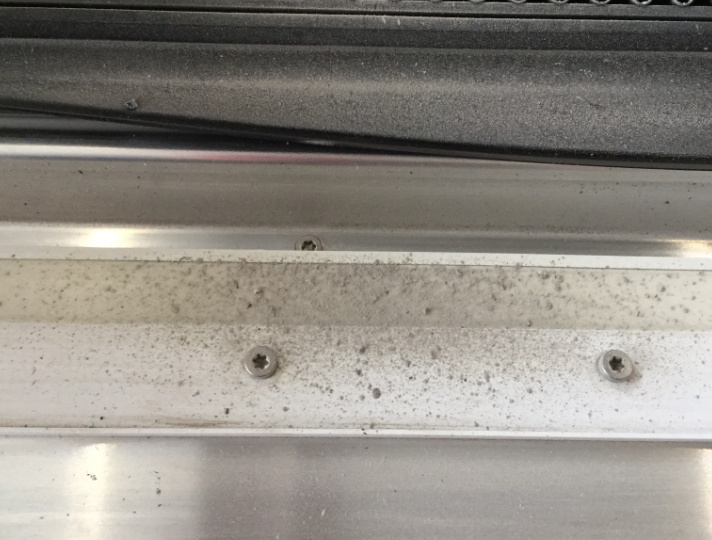 The fold down panel collected quite a bit of dust that couldn’t be cleaned without pulling the panel out. Thank you for making it easy to remove(and replace), GF Team! 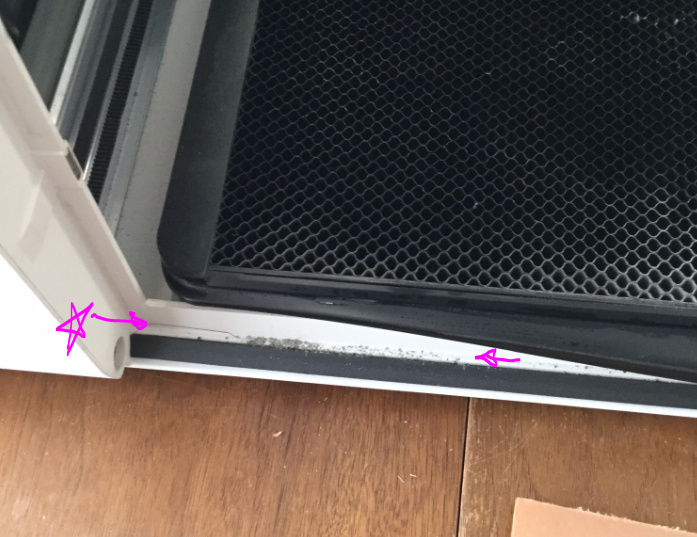 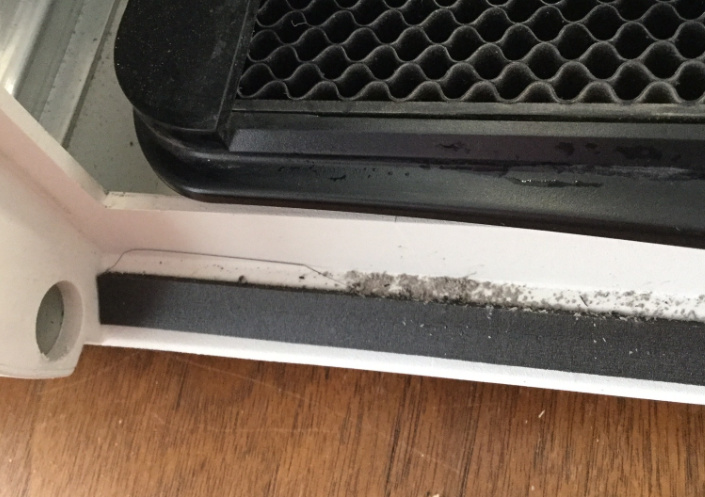 It took a lot of scrubbing. 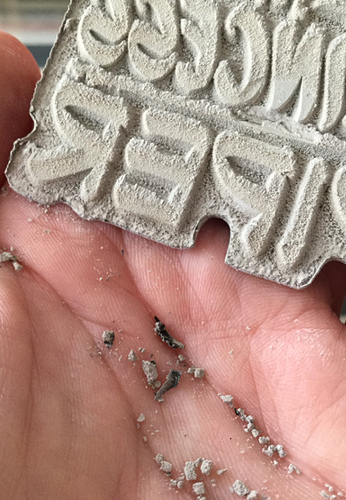 But it cleaned up well and works nicely! 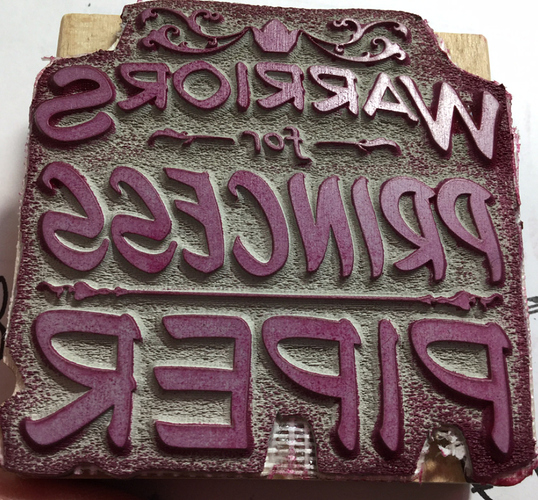 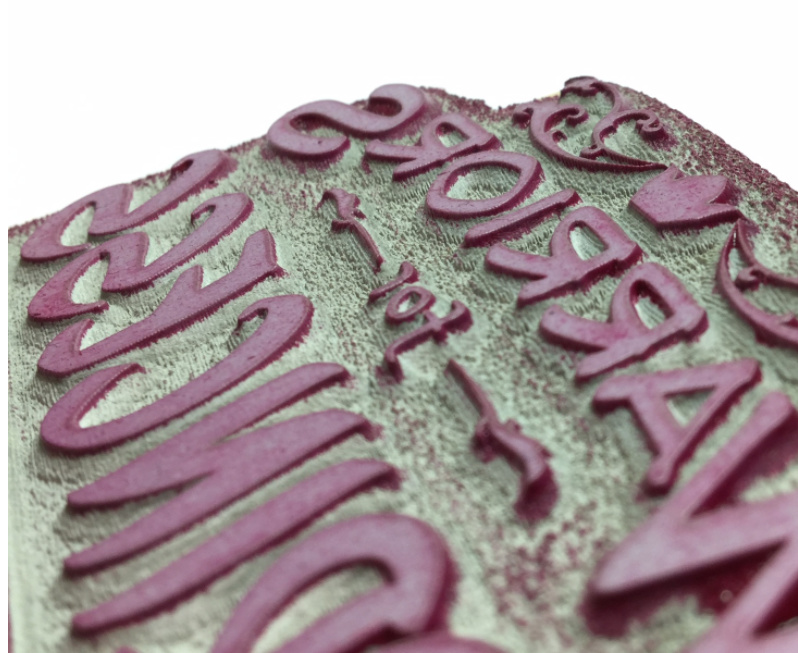 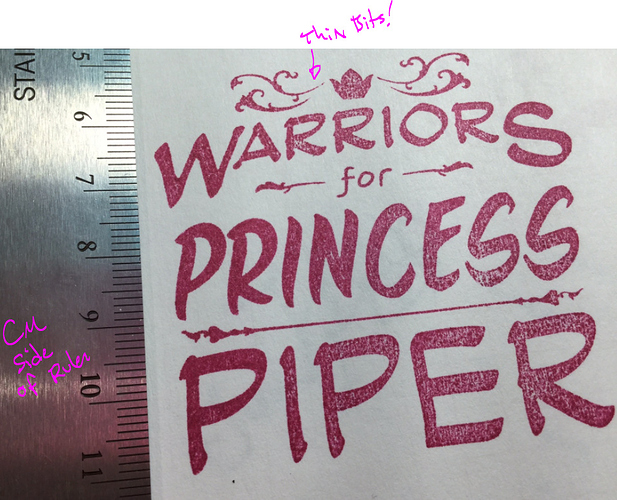 Now, who has tips on cleaning the exhaust fan port in the back

Now, who has tips on cleaning the exhaust fan port in the back

Yeah, that laser rubber makes a heck of a mess. From my experience, I would use a lower power and do multiple passes(to cut). That way you won’t get insane charring and debris.
Thanks for posting your settings too!

what about a shop vac running with a very small opening(the reducer for the small crevice tool) and a few poofs(as opposed to pews) of canned air?

Man, what a messy material! Looks like it made a great stamp though.

With the machine off If you pull the gantry all the way forward, you can get the best access to that area.

I do plan on devising a small diameter, long extension for a reducer to plug into the shop vac.

if you needed it to be flexible you could get that thick clear tubing from the plumbing section in Lowes/HomeDepot, golly the name of that stuff completely escapes me.

Giant version of the air hose for an aquarium. man why can’t I think of the name of the material of that hose?

I believe it’s vinyl tubing. Good idea, flexible would lend itself to getting into corners and tight areas. Just need to find or make a small brush for the end for cleaning the fan blades. All of the smoke and debris accumulation is just laying around as sediment, and just touching it breaks it free.

Next time, maybe tape a shield to the front panel?

If it were me, I’d cut out some cardstock to fit and tape it on right before cutting, then just remove it and toss it.

Seems easier than taking the front door off.

Thanks for this post, I got some speedball rubber this week and wanted to try it. This will speed my process up for sure!

It’s not as oily and smokey as the linoleum though. I’m grateful for that. Just… rubber dust.

Just need to find or make a small brush for the end for cleaning the fan blades.

So do you prefer the Laser Rubber outcome over your Lino stuff? Aesthetically speaking?

Yes to everything. It still looks a little rough when stamping - which is nice, but it doesn’t require as much pressure to get nice coverage. Everything about the process is easier with the rubber. I suppose if I were going to do heavy duty printing/stamping, the lino would be a better choice.

Thanks! I will check them out. It occurs to me, there is room in the store ‘parts’ section for a shop vac extension to ease cleaning of the exhaust path back there.

Now I wonder if there are different grades of rubber, so that maybe there can be less cleanup. Where did you order it from, if I may ask?

I was gifted it by a friend I met several years ago who runs a laser business in Denver. Originally I had ordered linoleum because I had/have no idea what I was doing. I asked her if there was a place in Denver where I could purchase some(there is not) on short notice and she gave me a few sheets due to the lack of places to purchase it in person. She rarely uses it she said, so by giving me a few sheets it would see use

It’s “Low Odor” Laser rubber and I’m not too concerned with the cleanup. I worked in a frame shop–oh my god–almost 20 years ago in high school and they had a laser for making rubber stamps and they did NOT use low odor rubber. Maybe it wasn’t invented yet, but i’ll take the low odor stuff over the stinky red stuff. I couldn’t smell this stuff at all while engraving it.

This is what the edge of a sheet looks like: 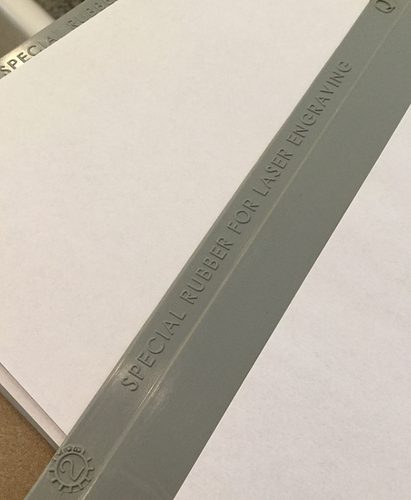 You can try these places

Hey man, if you’re in the Denver area you might consider meeting up with the other forgers. We are a good bunch, maybe even better in person!
Are you on the map?

Thanks @aj_stewped. Cheaper than https://www.johnsonplastics.com/laserbits so that’s encouraging. How are you cutting it? Does it cut easily? Sorry for all the questions, I’m very interesting in exploring this process. Especially like the idea of “multi-plate” lino-prints. (I use printer language since it’s what I know)

ey man, if you’re in the Denver area you might consider meeting up with the other forgers.

Absolutely I would love to meet up with folks! No, I’m not on the map yet because I’ve just been a lurker over the past 2 years. I will check that link out.

I am planning on making a journey over to Plasticare next week, so I’ll be up north-ish, wink wink, nudge nudge…

How are you cutting it? Does it cut easily?

What do you mean by cutting? With a knife or with… THE LASER! The rubber cuts easily with an X-acto blade since it’s so soft. I haven’t tested a multi-pass cut on the laser yet, but it did cut in 1 pass with the settings above.

Sorry for the delayed responses, i was at a mini-comic-con yesterday and no time to login to the forum.

Whoa, you’re super close to me!

Alright! A forger on this end of the metro hemisphere!
The rest of us who have met up are scattered up north, Boulder, Erie and Ft. Collins. There is a plastics vendor in Louisville who sells scrap at half price once a month, so that’s where we have gathered for a beer.

I have met 7 owners now, and welcomed 5 of them into my home to get a look at the pre release. All of them friends now.

Plasticare has great reviews, I need to check that place out.
Let me know when you are going and I’ll plan on it!

I look forward to meeting another of our ilk!

BTW, your comics are great!