Same issue I reported Here
The only file I have run today 4/19, 2-hour print and the laser pauses multiple times toward the end of the operation. Most of the run time is engraving 77 tokens and hasn’t yet paused during engraving, so far the pauses have all happened during the cuts.
Sometimes it would resume and complete 4-5 cuts and pause again. After pushing the button sometimes it would immediately pause again, and I instantly pushed the button again. Sitting there, I had to hit the button 8 times to resume and finish the print. The only message the UI had was the same one you see when you intentionally pause, no error messages.

I’m worried about my machine, could someone please look at the logs and help me understand this?
Thanks!

What happens if you don’t immediately press the Print button again? Will it resume when it’s done thinking about it?

I had that issue yesterday. Here was the error message: 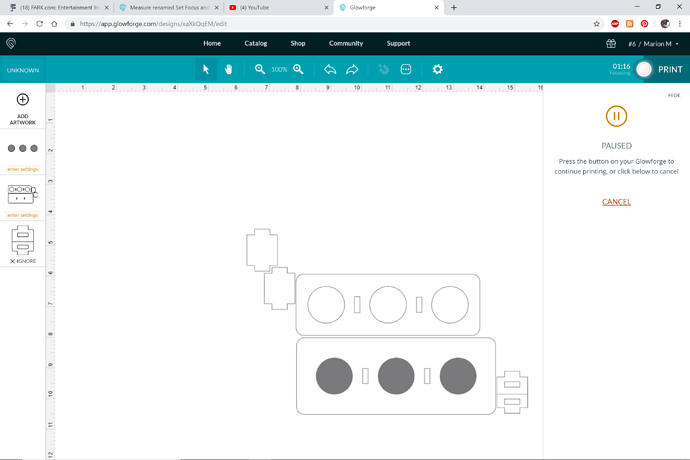 I thought it might be wifi connected because just about that time I had a dropped link from my laptop to my router.

It happened a few times. I just assumed it was wifi. I had not run into this behavior before. I was curious as to the pause thing.

No, it will sit for hours.

Sorry, but oh man! I’m glad it isn’t just me! Gives me hope its just a software glitch.

The GFUI crashed right after this screen. I restarted the design and the print was still listed as going. That’s when I thought to press the hardware print button again.

I could come up with a theory… I haven’t read all of your posts on the subject, specifically to see how far into each project it is… but, they started zipping the motion plans. One would presume that only X-amount can fit into the current buffer, and then the next one has to be unzipped and the current one removed from storage.

Not a great theory, but makes sense in a way that it would pause momentarily, but, you would think it would auto-resume.

Both times, yesterday and today the UI was fine.

Sounds reasonable, but several of the pauses were back to back seconds apart.

After Fark, Cheezburger is my biggest internet time sink. Well, not counting the Glowforge forum.

Okay, here’s a really off the wall suggestion. Have you removed and inspected the head to see if a magnet is possibly stuck there? I had one jump up once (long before the new fan messages) and was looking all over for it.

Thanks, yeah I checked it and the contacts too.

@marmak3261, do you happen to know if the pause occurred during the cut?

The three times it did it were during cuts. The engrave part finished and then the cuts were paused. It resumed just fine though after pressing print.

The engrave on the first side of this file is almost 2 hours, no problem. the cuts cause it apparently. I flipped the tokens and completed the other long engrave without a hitch.

Yikes! Hope they get it sorted out quickly for you … Probably for everyone.

I’m so sorry for the delay.

Thank you pip!
The file is running right now, probably about 10 min before it starts cutting.

Just finished the print (3:40 PM mountain) and it paused 17 times out of 77 cuts. Random frequency, it might do 20 cuts and pause, and pause again after 2-3 cuts. Occasionally it will pause almost immediately after I push the button.

Thanks for the details! I’ll include them in the investigation.