Made this box for a friend who is into Magic the Gathering. 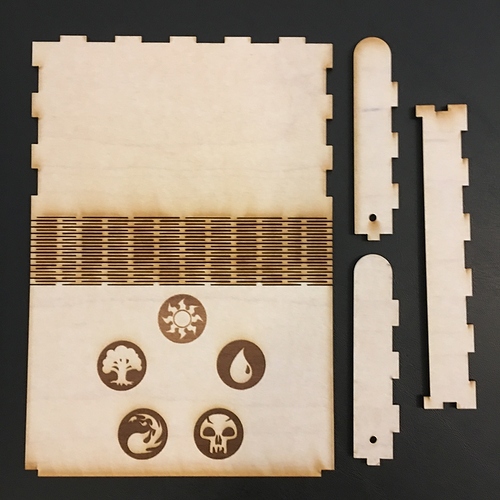 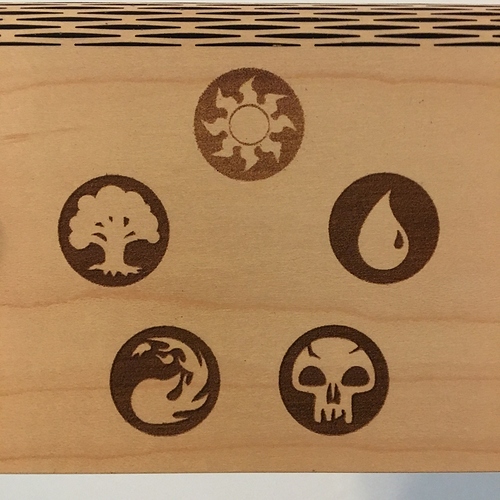 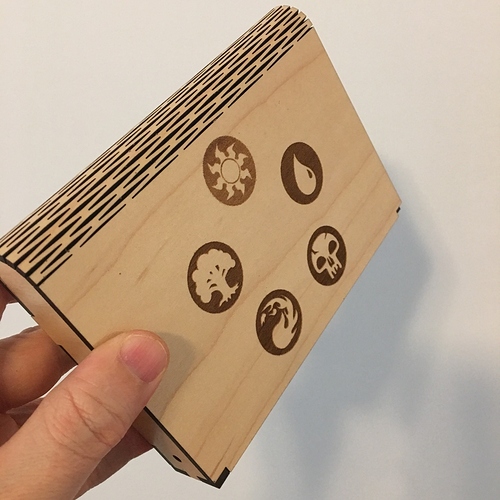 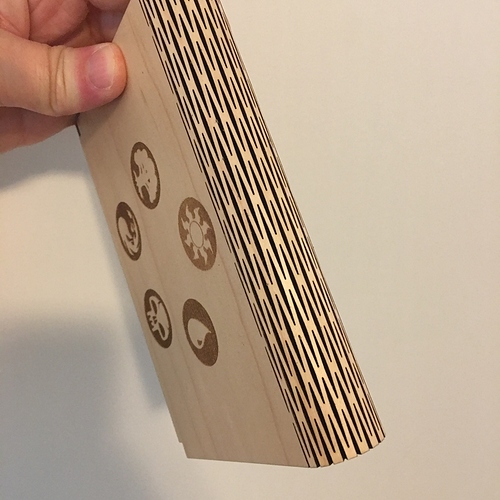 Original design for the box can be found here on thingiverse.

I just deleted the EB initials and added the Magic symbols. 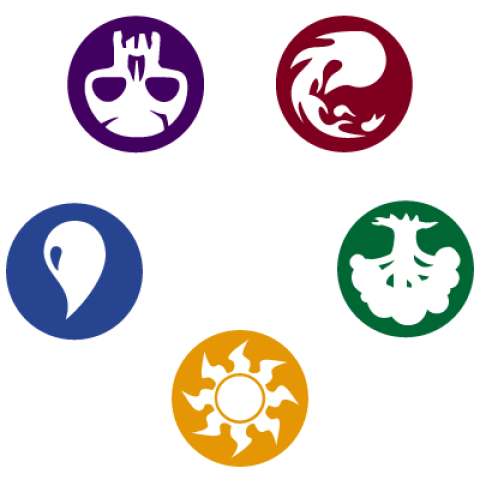 Pretty impressive output for someone who just got their machine–kudos!

Pretty impressive output for someone who just got their machine

Yes! That’s the magic of this machine. Plug it in, drag and drop. The founders hit a sweet spot.

You will need to use a program to convert DXF to SVG. Inkscape works, and is free.

this is pretty awesome, though still trying to figure out things for my Glowforge.

In loading the design I get the following:
We can’t process clip-paths (yet!). Clip-path(s) have been rendered along with your design in case you prefer to cut them out separately. For now, edit the affected shapes with a path subtraction tool and they will upload successfully.

A) not sure what that means
B) should the cut information be preset somehow or do I have to figure out manually the speed, and power for the cuts?

Clip paths are like a transparent masking applied to an image to hide parts of it. (Say you’ve got a square picture, and you only want to cut out the picture inside of an oval shape - you can overlay an oval clipping path and all of the data outside of the oval is hidden.)

The problem is, they don’t really get rid of the data, they just hide it. The Glowforge interface can still see the hidden data.

You need to completely remove the hidden areas, not just hide them. You can do that using the subtraction tools in either Illustrator or Inkscape.

(There might be other ways to deal with it as well…that’s the one I’m familiar with.)

Also worth mentioning, in case you didn’t use any clip paths yourself (Feels likely because I translate your point A to mean you don’t know what a clip path is): Many free SVG files you find online are designed with clip paths, and so those will exist in the file, but you won’t be able to see them in your editor. Sometimes they DO show up in the Glowforge though (as an extra rectangle or other shape that you don’t know WHY it is there).

If the extra shapes show up, change the color of all of your lines to not-black. Most of the times the clip path is black, and so if you cannot get rid of it, simply making it the only object of whatever color it is allows you to ignore it in the GFUI.

That’s a handy tip! (I rarely use internet images, so didn’t realize they could have built in clip-paths.)

I don’t know why I have such odd luck, but so far in the 5 or so times I have grabbed an SVG from the internet, 3 of them have had clip paths that I cannot figure out how to directly delete. Fortunately I figured out the color shifting approach early on, and eventually realized what they (probably) are.

Did you get it figured out? Here is a lively discussion about those rascally clip paths.

What is This Clip-Paths Error? Problems and Support

We can’t process clip-paths (yet!). Clip-path(s) have been rendered along with your design in case you prefer to cut them out separately. For now, edit the affected shapes with a path subtraction tool and they will upload successfully. Can someone explain what this error means? I have no idea what clip-paths are. Is it possible for the software to highlight the parts it can’t process so I know where fixing needs to happen?

Well I understand more about what they are now. However when I go into the file for the magic box that is posted at the top of this thread, I can’t actually find anything in Inkscape that appears to be a clip-path. What I’m seeing is a bunch of lines that have been arranged and have anchors on them, but nothing that is an overlay of another image on top of another as in this discussion - so either I’m still missing it

or I’m still not quite understanding…

Opened it in Illustrator and the only thing I potentially saw was a < namedview that wasn’t doing anything in the file. It shows up in the GFUI as the engraved rectangle in the picture below: 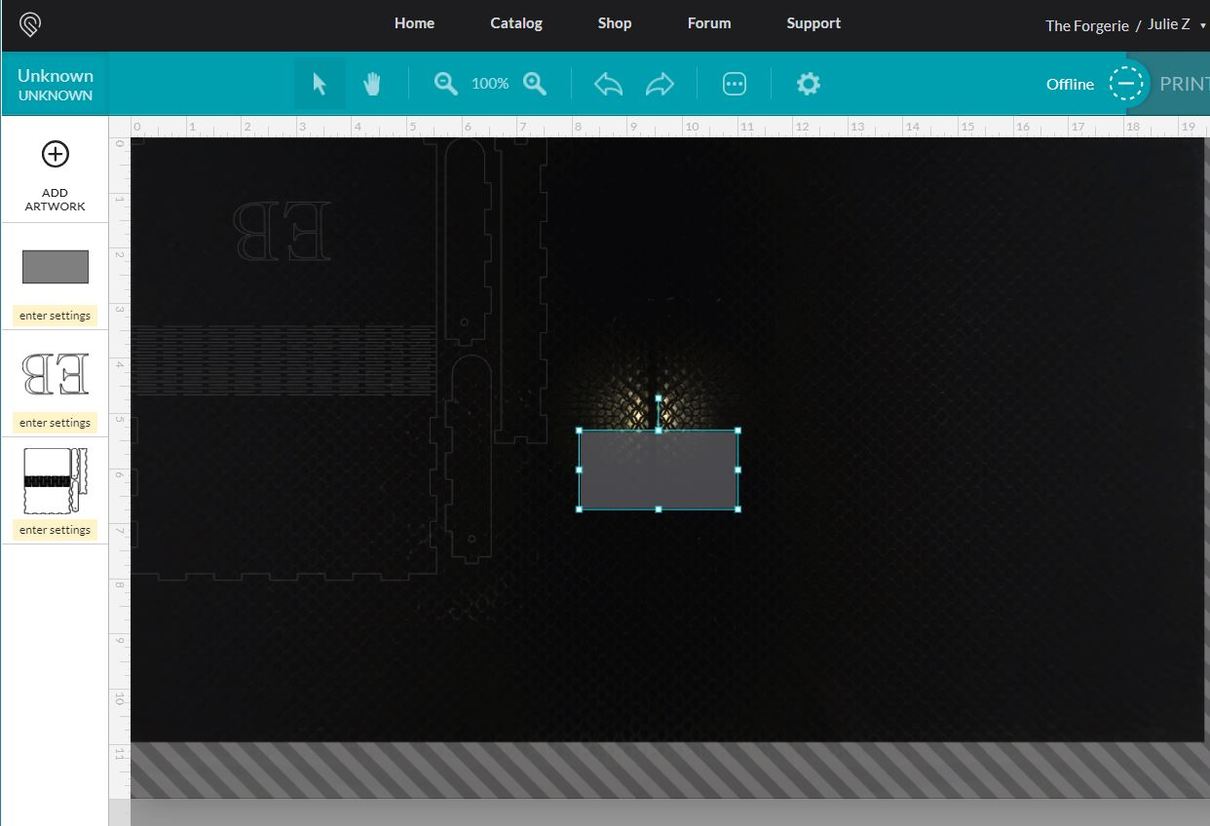 You can just delete that and get on down the road. No telling what program the files were created in.

If you use the Proofgrade materials, the power and speed settings will be set up for you. If not, yeah, you’ll need to test for them. (Start with something similar that you already have the settings for.) If you don’t want to have the EB initials scored as well, make sure to set that to Ignore.

Yes, there is something weird about that box, like @Jules says. In Inkscape it says two objects as flowed text. I can’t do anything with it in terms of coloring or outline. It floats of the design board to the right. Doesn’t mean anything for the design though.

You never know what comes up in files sometimes you download.

The offender is either the namedview4 object, or one of the two objects named with flowRoot####. Flowroot was supposed to be part of the SVG 1.2 standard, I think - but never implemented, or completed. Or something. It doesn’t work, so far as I know. Inkscape is about the only thing that tries to use it. I was able to kill the error just hiding the flowRoot objects (that don’t even appear as selectable — but they are in the SVG and Illustrator says wtf is a flowRoot, I’m gonna put it here anyways)

“SVG 1.2 enables a block of text and graphics to be rendered inside a shape while automatically wrapping the objects into lines using the flowRoot element. The idea is to mirror, as far as practical, the existing SVG text elements.”

ignore it in the GFUI

I sort of did this by accident tonight. I ran into this problem and have never really understood about clip paths, so I’m on here right now trying to learn about them. I did however, go ahead and engrave some acrylic with a design that had a clip path, so I ignored it in the UI and it worked just fine. I still need to learn about them, though…

Nice I like it. I made a magic the gathering box for my brother in law for his birthday. I used plans from Cartonus. They have a latching type box that goes together with a free hammer plan they have. The dimensions are so good you only have to put glue on the latch to hold it together.