I know that @karaelena and a few others have experimented with marking slate, and I’m looking of guidance on power/speed settings that might be used.

Today’s our 34th wedding anniversary and it would appear that the contemporary gift is Laser. Acrylic and wood have already been prepared, but I should have j u s t enough time to engrave some text on a heart-shaped piece of slate I picked up at Michaels.

Unfortunately the cheat sheet I’ve been working on since day one is null and void after the last update (not today’s, the one prior) You are going to have to experiment. In the future when you grab on off materials. Always grab two. And use the second for testing / dialing in.

Really? Laser? Who’d a thunk it?

Congratulations on 34 years together…that’s quite an accomplishment!

that’s quite an accomplishment!

Luckily, I have the back to practice on, then cover my sins with cork.

Congrats on your 34th!

I think I had set my tile and clam shell engraves to 25% and 30lpi or so, and it dug deep!

The vector is always nice than the raster, though…def go with vector, I say

Made a few more little things Made on a Glowforge

Used the GF’s design of the picture frame with living hinge to make this customized one (ummm, I had to blur out the logo of the theme party…sshhh) [image] I tink I forgot to remove some of the backing, lol. Anyway, it was fun & easy to make, but the back piece’s engraving (the big dark patch on the pic) took a while, since it basically has to cut a pretty large area with just a pin needle width laser, so it takes time to cover the whole area. If you are making a lot of these, you might be…

Congratulations on your 34th!

Congratulations! Good luck with the slate.

If you don’t finish the slate, do what I did several years ago @dwardio.

I got my sawz-all out, put a 12 inch long blade in it that allows you to cut arcs easily and cut out a big heart shaped piece of sheet rock from the garage wall. Painted it red and gave it to my wife. She loved it.

out, put a 12 inch long blade in it that allows you to cut arcs easily and cut out a big heart shaped piece of sheet rock from the garage wall. Painted it red and gave it to my wife. She loved it.

LOL that is EPIC

Thanks for the suggestion, but I think I’ll stick to the slate…

I would also start at mid to low power and a fairly fast speed.
Otherwise the slate surface may melt and leave a light brown bubbly edge that is not super attractive.

Thanks – definitely more interested in etching an image than creating lava. I’ll leave that for the weekend.

I think she liked it @nunzioc because it proved that she is more important than the garage!

(Although, I’m not sure she is more important than all the tools in the garage!) :-))) 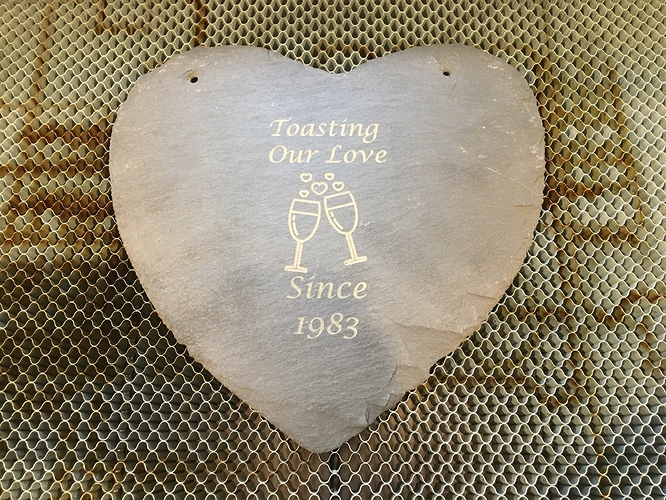 This thing is simply astounding.

Outstanding! It almost looks like you filled it in with gold leaf. Trick of the light?

Whatever you did it worked, that looks great!
Also, congratulations!