Moved and now my camera accuracy is way off

My GlowForge accuracy was fantastic for the last few months. I just moved, so I packed up the GF, drove it up, and unpacked and set it up. Now positioning is about a quarter inch off. This is a screen shot of the app after scoring 3mm blue acrylic, a material I’ve used quite a bit. The crumb tray is clear, the material is flat and solid on the crumb tray. 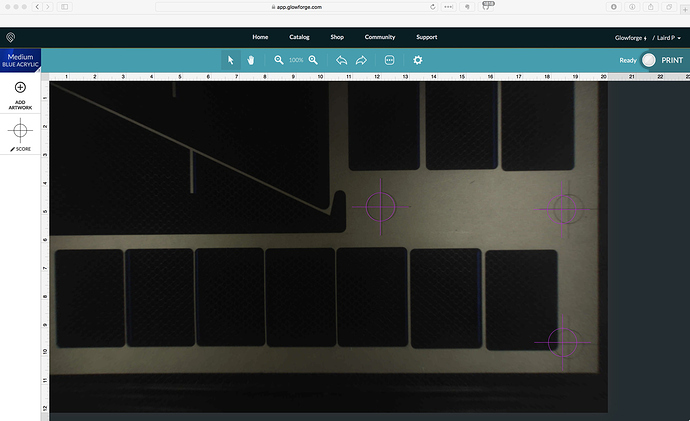 I’m wondering if packing/unpacking caused the lid to shift how it closes slightly. It feels the same, but even a subtle change in angle could cause a quarter inch shift. It reminds me of how my GF camera was off by about a quarter inch right after I got it, which got better a month or so later.

Does GF know to recalibrate the camera alignment after the GF is moved?

Have you put the GF on the same table as it was before, or a new one ?
If the latter, are you happy with its ‘flatness’, and that your GF is not twisted in its new location ?
John

It’s not on the same table - that’s in a truck that’s still in transit. I think that the GF is relatively flat - the lid doesn’t bind. But I’m sure that it’s slightly different from before the move, which is presumably what is causing the camera alignment to be “off”. The question, IMO, is whether the GF can recognize that it’s been moved and needs to recalibrate. With my 3D printers I often need to re-do bed leveling after moving the printer (for the printers that don’t auto-level), because the frame shifts slightly when the printer is moved. So is the GF like that?

I belive the received wisdom is to level the corners of your GF with any thin shim material, using the fit of the lid as a crude guide to it being ‘level’(not twisted).
Then testing the alignment with paper or card as a throw away test piece, till you’re once again comfortable with its performance.
But definitely a DIY procedure.
John

So basically try to twist the printer so that the twist matches the twist before I moved it? I assume that means there’s no way to tell GF that a printer needs to be recalibrated for the case ‘twist’?

the twist before I moved it

I can only apply logic to what you have said in your OP, that you were very happy with its performance, so I assume there was no ‘twist’ present.
If the only thing that has changed is the table on which it stands, then a new twist seems to me to be the most likely cause for the change in alignment.
YMMV.
John

The only calibration data available is that from when GF calibrated it at the factory.

The question, IMO, is whether the GF can recognize that it’s been moved and needs to recalibrate. With my 3D printers I often need to re-do bed leveling after moving the printer (for the printers that don’t auto-level), because the frame shifts slightly when the printer is moved. So is the GF like that?

I’ve moved mine multiple times–within the same house, and have not noticed a significant change in performance; but, I’ve been using the same table the whole time.

Nobody’s really directly answered your question, so: there is no way (that anyone here has disclosed) to recalibrate it. The calibration is done at the factory, supposedly on a special granite slab that is so flat it exists outside of space and time.

As many of us have noted, the case is not rigid and the performance of the camera alignment is extremely sensitive to the surface it’s on and how the lid closes. We’ve been told that the factory calibration collects all sorts of extra data that the machine may learn to use in future software updates. But I don’t understand how that can really help if it doesn’t take the installation environment into account.

I would imagine they’re using something like this, it’s only $900 for a 24x48 slab (and 800 lbs): Precision Granite Surface Plate

I’m sure there ought to be a way with a laser pointer, and perhaps four mirrors, one at each corner of the top of the GF, that you could project a line onto a nearby wall, demonstrating that the GF was flat.

Thanks for that. Puts my thoughts into some sort of context.
Not sure what, but I’ll work on it.
John

The thing I’m a little confused by is that my GF’s calibration got a LOT better a month or two after I got it, and it sounded like that was the GF software doing some kind of calibration (though Dan was vague about the nature of the improvement).

Thanks for the tips everyone.

Here is the instructions we provide about using paper spacers. It is usually in reference to a lid not closing, but the same concept would apply here.

Each Glowforge unit is tested on a flat surface. Many tables are not perfectly flat, which can create some friction when the lid closes. This is not harmful and does not require any changes. If you would like to improve it, however, try inserting a spacer - for example 20 sheets of copy paper - under the center of the printer. If that doesn’t help, try moving the spacer to either edge. It may require some experimentation, including more or less paper, to find the arrangement with the least friction when it closes.

@laird please let us know the results. Hopefully, you’ll be able to get it sorted out, but if not, please do let us know.

Priced per pound, that’s kind of a bargain. Its a good thing glowforges don’t need to be calibrated on 800lbs of cherries.

Hey! That exists WITHIN space and time! In fact, it’s USA-made.

“black precision granite surface plates are MADE IN THE USA”

I do appreciate the price point glowforge was able to achieve (the only reason it was possible for me), but since the flex in the case can be problematic, I think leveling feet on the case would have been well worth the added expense.
Short of a honed stone slab few surfaces are that flat or rigid. No floors are, and any deviation is telegraphed through the table legs to the top. Paper is a good shim choice, but aluminum from a soda/beer can is widely available, can be cut with scissors and won’t compress at all.

I’m not sure how the case flexes if not fully supported but I’d imagine one could pretty easily build a u-channel that fit over the rail, had a recessed hole to lock a nut in and then screw in some furniture levelers.