I always seem to have more than one thing going at a time, which for sure keeps me busy. Today, I pretty much wrapped up three things, which made me feel comfortably accomplished. First…the little acrylic trees which I have posted about before. Tried making one with the green PG acrylic, and while very pretty, it’s not nearly as festive and sparkly as the clear. I fooled around with the tree topper. The angel is pretty, but too large and not enough definition to make it recognizable as an angel. I’m burned out now on acrylic trees! The last one I made, was to send to my son and daughter-in-law in Delaware….along with one of the mirrored turntables. I painstakingly glued on a bunch of ‘bling’….including the round off-cut ‘holes’ from the green tree. I must say…I’m a pro at making those trees, now! 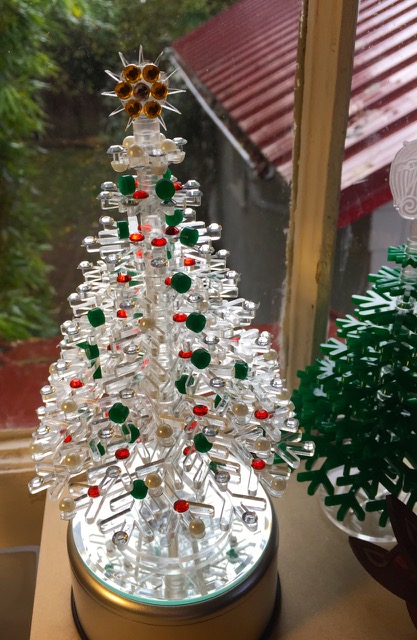 I’m not a ‘cat person’….but my son and his wife have a cat, so I’ve concluded that there is click bait, there is cat nip….and that this spinning tree will certainly be cat bait. Don’t know how long it will remain intact……but whatever….c’est fini!

My second project (PG cherry) has been to make tiny music box for a dear friend for Christmastime. I’m not ‘into’ music boxes per se, but it was a small challenge for me. I’m sure he’s not ‘into’ them either, but I know he’ll like it for what it really is……something I made especially for him. I bought the music box mechanism on Amazon (of course) for $8. (Funny to me…the name Sankyo sounds like ‘thank you’…but fun that there’s an ‘S’ on the little key…my friend’s last name begins with an ‘S’) 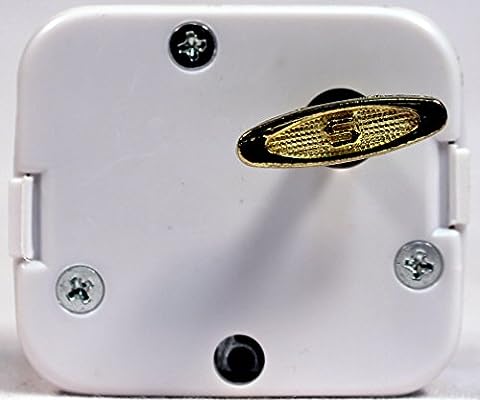 Amazon.com: 18 Note Wind up Music Box Musical Movement - Plays "We Wish You a...

Since it has to be wound, I wanted to design it so it looked pretty sitting down flat….so it can be wound, remove the key, and let it play. Then I thought to make the delicate key holder, so the key doesn’t get lost. I cut and glued together two pieces, one with a tab to fit into the side of the box. 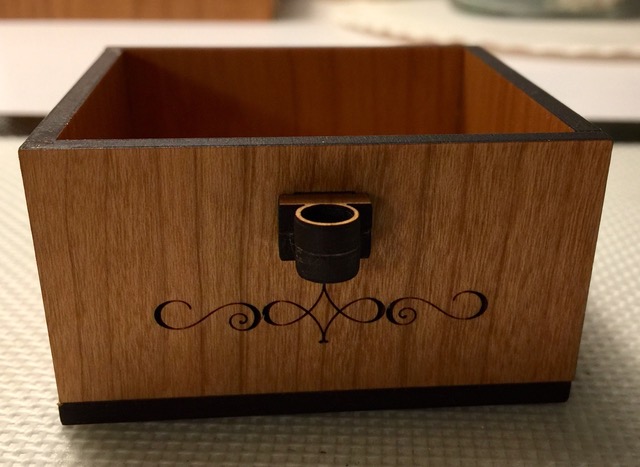 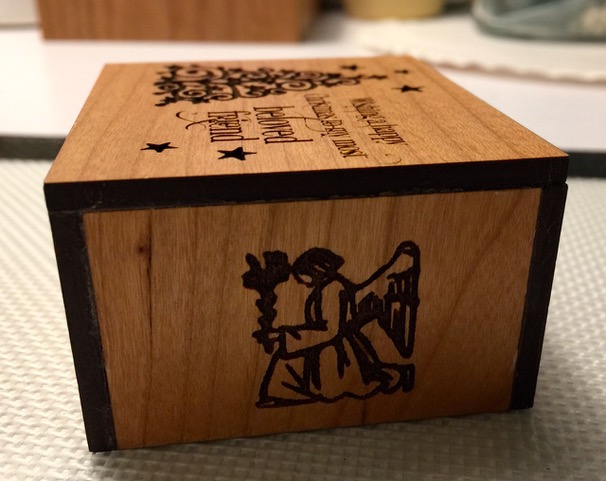 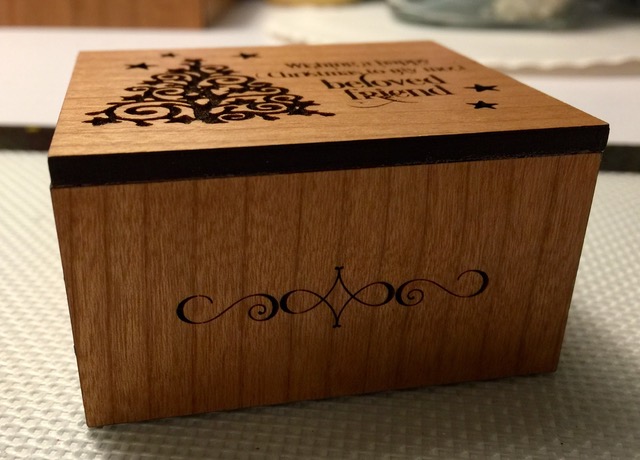 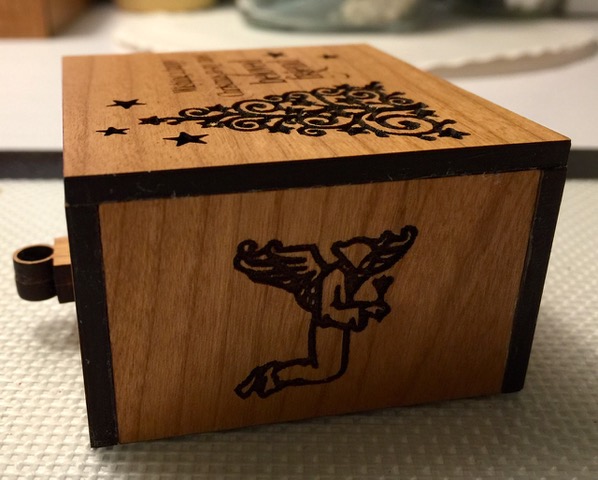 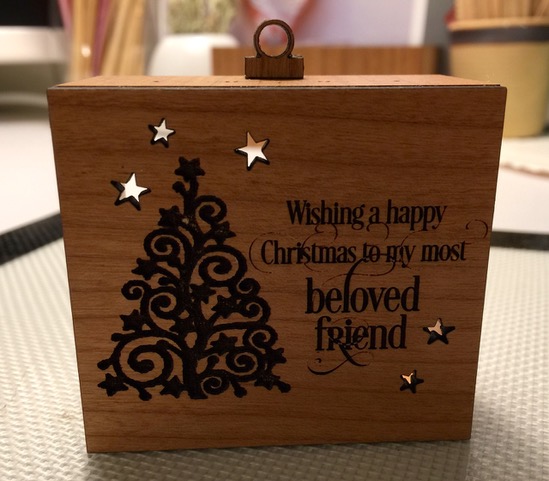 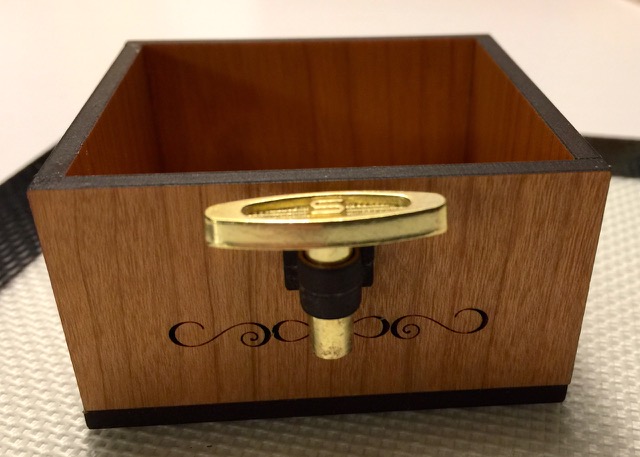 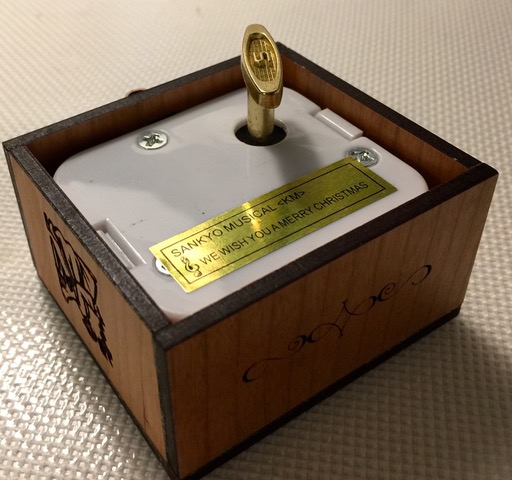 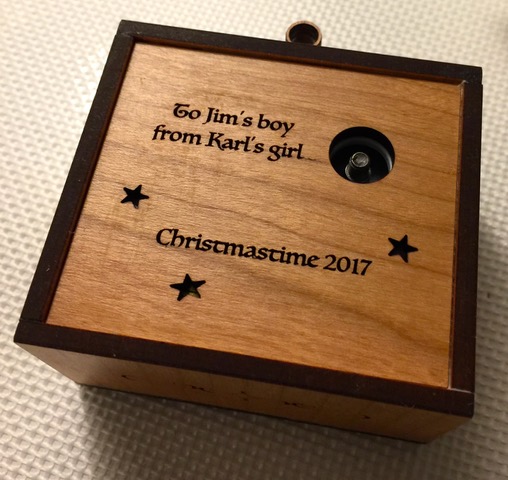 In looking at this project, there are probably things I would have done differently, but it turned out so well that I’m going with it. Everything is a big learning experience though….and that’s just the best! I very much like boxes that are just plain glued together rather than finger jointed, so I will be making more in the future. The most difficult part of this was being patient. Waiting for glue to dry can be excruciating! But, I gritted my teeth and let it be.

The last project will be remaining ongoing, but I meet certain challenges along the way. My older brother and I are collaborating on engraving fine art (his) onto wood……but now I’ve discovered LaserTile that many here have also found. The PG cherry piece was done with dark graphic, which looks good at first, but added too much char and subsequent bits coming out and leaving light spots. The second one I did (no photo) was much better with regular graphic.

I think the tile will prove to be amazing. I have this tile stuck temporarily in a makeshift frame with masking tape, just to take a picture. I have circled an area that needs to be cleaned up in the file before any permanent engraving is done. This was sent to my brother to show him the possibilities……which are exciting. This is a drawing he and a friend put together in about 20 minutes, and I use it a lot for prototyping stuff. 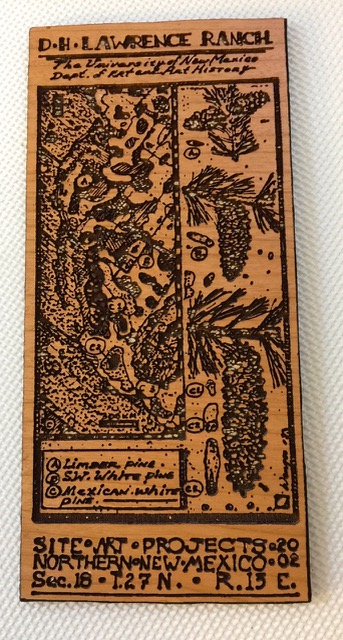 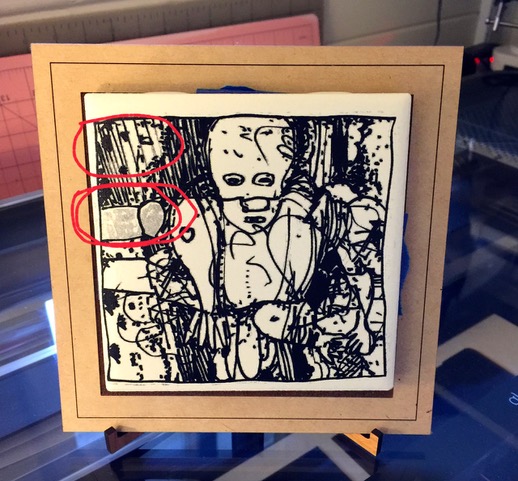 Ding, ding, ding……on to the next round!

Those are all great, including the bling tree and the art tile, but my fav has to be the music box. (Love the fact that you include a holder for the key! I always lose stuff like that!)

Definitely liking the second tree. BTW, I’ve seen some AC adapter powered turntables with color changing LED’s pointing up in the center that might be cool for that.

Great stuff.
One of a kind gifts are awesome.

That one is powered…just not turned on in the photo. Since it was daytime, the lighting doesn’t show that well. Thank you, though!

I tend to be jaded to your stuff because it is so consistently good. Not this time, you pushed past my high expectations for you. Yours is stuff I study to get better, you are one of my muses here.

I love the detail of the music box, just enough without being too much.

Oh my…I am seriously honored. I had always thought the same of the things that you do! Mutual admiration society, here. Thank you so very much.

Okay, took a closer look and I do see it. Would love to see it lit in subdued light, must look great?

Wish I could take another photo…but it left on Friday from the post office! Here’s the first post I made about these little trees, though.

Flat-pack Christmas tree Made on a Glowforge

I made the flat-pack Christmas tree, so kindly offered to all of us on the forum by @chris1. I made mine out of Proofgrade med.clear acrylic, though it can certainly be made out of any other materials. After it had all been cut out, I found out that I didn’t have anything to use for the ‘trunk’, so assembly had to wait until I found some clear drinking straws of just the right diameter. A straw works just fine…and certainly makes the whole tree featherlight, but really it would be much better to…

Not only are your projects beautiful, but your declaration of being not a “cat person” or “into music boxes” shows how much you care about the recipients of your thoughtful gifts. Keep up the good work!

The angel is pretty, but too large and not enough definition to make it recognizable as an angel.

Did an ugly paste up. If wings more defined maybe better recognition.
Like so (just not as ugly) 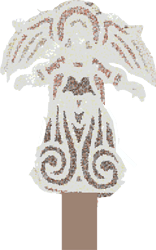 Good and welcome suggestion. Someday, when I get un-burned out with these little trees, I’ll give it more thought. Thank you!

I love the Christmas trees! Of course, the box you made for the music box is very nice. I agree with @jules … the key is a crowning touch!

Over the years, I’ve found that no matter how difficult (or easy) the project is … I usually only want to do it once. When I have done 2nd and 3rd’s … it strips the fun, and becomes work. My hobbies are for fun … never for work!

In my card making, I’ve started to try to do 2 or 3 of the card at the same time … knowing I won’t want to do it again. At halloween, I did 14 of the same card, and being a little more intensive on the Copic coloring time spent they were truly a labor of love. If I had made one first … I just wouldn’t have wanted to make more. All in the mind!

Although, it has nothing to do with laser time … here’s my Halloween card. Front on the left, inside on the right. 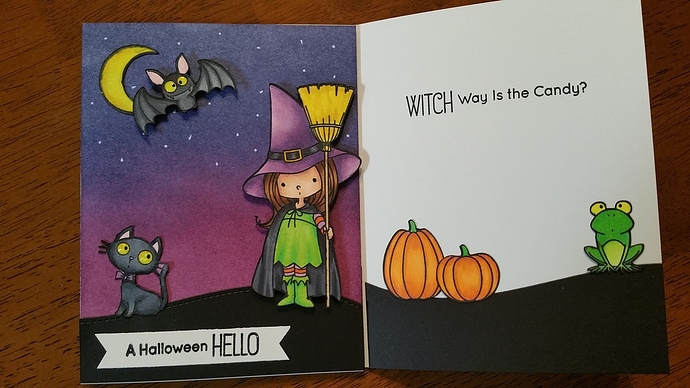 Ooooo, I love all your projects! I like the green tree as well as the clear one. You can use it to showcase ornaments that wouldn’t show as well on the clear one, like gold and silver.

That music box though. Wow! I just love the clever key holder design! That’s really thinking outside the box😉! I’m with you, I prefer a smooth side to the finger jointed look.

Very nice @Xabbess!
I agree about the finger joints, but what they have going for them is registering the assembly and strength. It would be possible to get the best of both by having tabs that extend into the adjacent piece without going through it. The music box would never need the additional strength, but for something that was subjected to more severe duty, the additional design time might be worth it.
I really like your setup BTW, and ‘Laser Pantry’ just has a warm welcoming sound to it.

@ptodd, your card is precious!

Oh I wish I could draw that way!

Oh no … I didn’t draw this … it is stamped and colored with Copics.

Whew! I’m feeling slightly less inadequate now.
(Although the shading you get with the Copics is a technique I have yet to learn either.)