I made the flat-pack Christmas tree, so kindly offered to all of us on the forum by @chris1. I made mine out of Proofgrade med.clear acrylic, though it can certainly be made out of any other materials. After it had all been cut out, I found out that I didn’t have anything to use for the ‘trunk’, so assembly had to wait until I found some clear drinking straws of just the right diameter. A straw works just fine…and certainly makes the whole tree featherlight, but really it would be much better to have something of more substance, like a metal tube, but to paraphrase Chris, you just have to use what’s available. 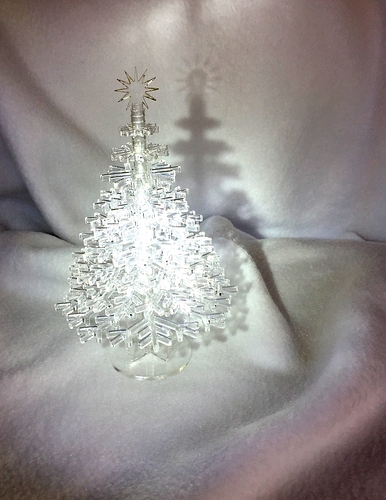 In as much as I actually enjoy it, weeding took about 30 min. and there are several very tiny pieces that have to be done, as well as the larger ones. It is designed for someone to be able to assemble and disassemble it, and essentially be able to send it in the mail. I found however, that I needed to glue the base, so there went that notion. It was just too wobbly. I also wrapped at least two layers of scotch tape around the bottom of the straw to give it a tighter fit into the piece of acrylic designed to hold it. It was fun to assemble, but honestly, I would not care to keep doing that every year. I would just put it into a little box and let it be.

I redesigned the star on top. It’s ‘stem’, the part that slides down into the straw, was too narrow and too short…again, the wobbliness, so I made the stem wider and longer….and made the star itself larger and with more points.

It’s pretty tiny…about 6.5” tall……but in acrylic, it’s pretty sparkly looking, too! I’m thinking it would look even fuller and prettier if I used twice the amount of branches and only one spacer in between each one rather than two. Against the right backdrop, it would be lovely on it’s own…but a LED light bulb went on over my head and I thought about the under water light ‘pucks’ that I had bought this summer. 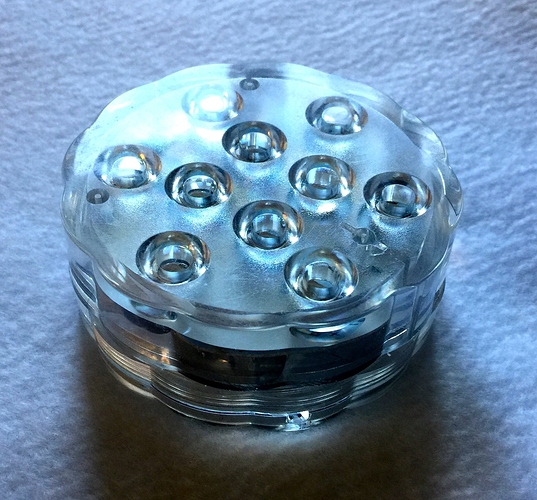 About 2.75” across, it seemed they might make a good light base for the tree. I had never used them in the pool as I’d thought I might, so this would be a good alternative. 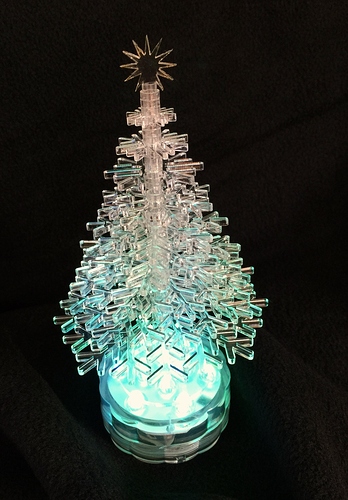 They worked perfectly, but I thought it should be housed in some kind of base to keep the light going just up to the tree.

So, I made this; it’s a bottomless box with a frosted acrylic insert on the top that hides the uglier battery part of the light, diffuses the light a bit on the top edges, but allows full lights under the tree. The reason I made the box bottomless is because the top and the bottom of the lights screw/unscrew apart for the batteries and I just wanted easy access. If I did this again, I might come up with a better design, but this is my methodology for getting to that place. Now, woe be unto whomever tries picking the tree up by the box part. Ha! 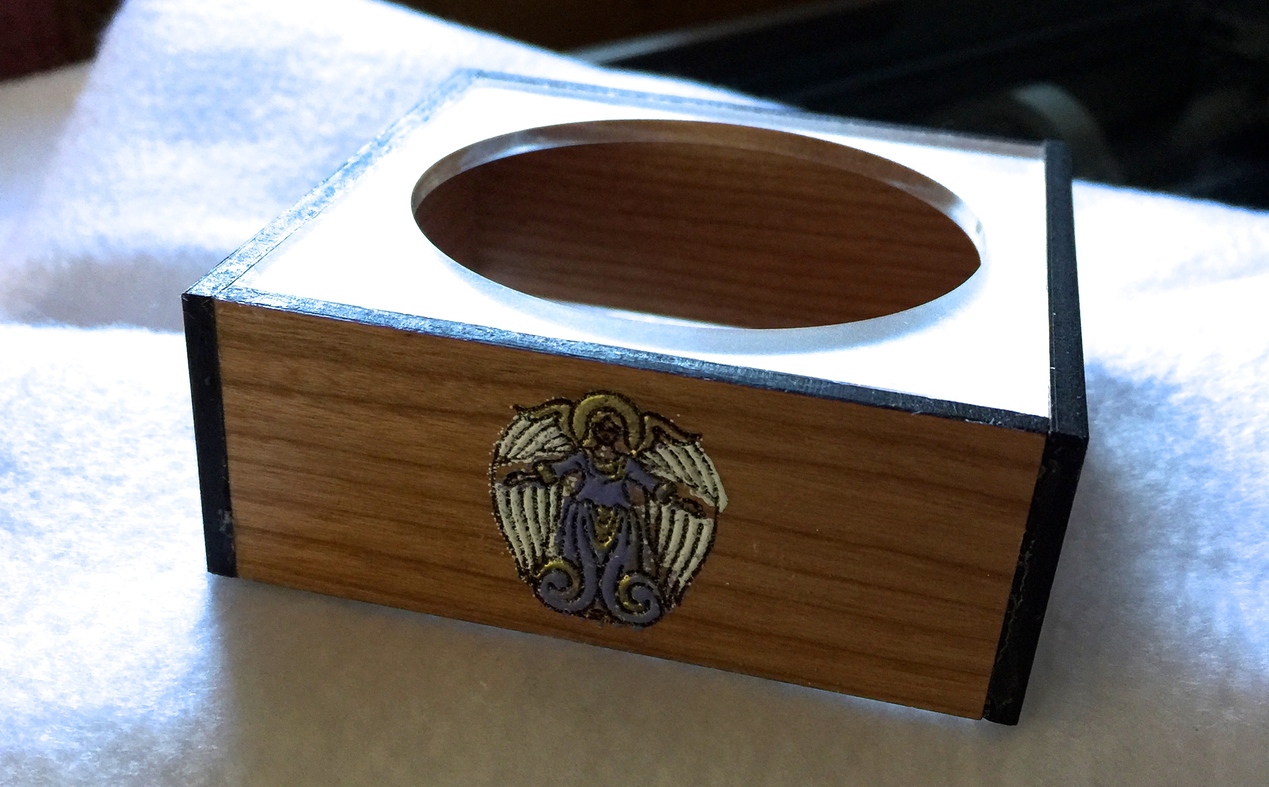 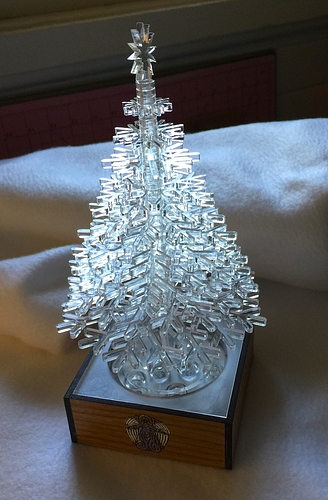 Lastly, I decided to engrave some Christmas imagery on the box sides….which worked very well until I glued two of them upside down! Good thing this one was only for me, as it would have been a big pain if it were for someone else. I also couldn’t resist doing my embossing thing on them. Only one turned out to be my saving angel……she was right side up. And the fourth image? turned out so badly that I won’t even show a photo of it here. 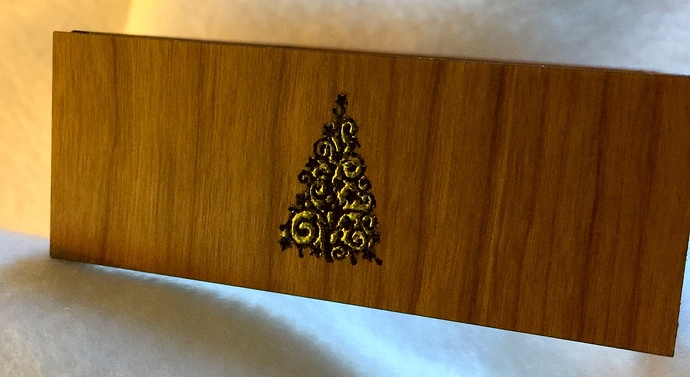 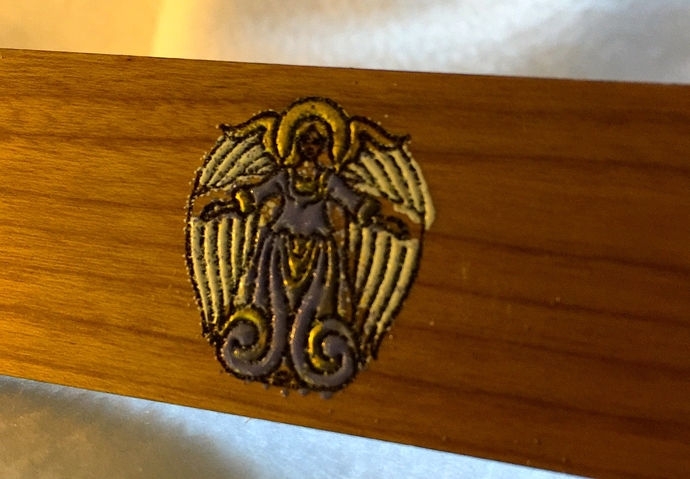 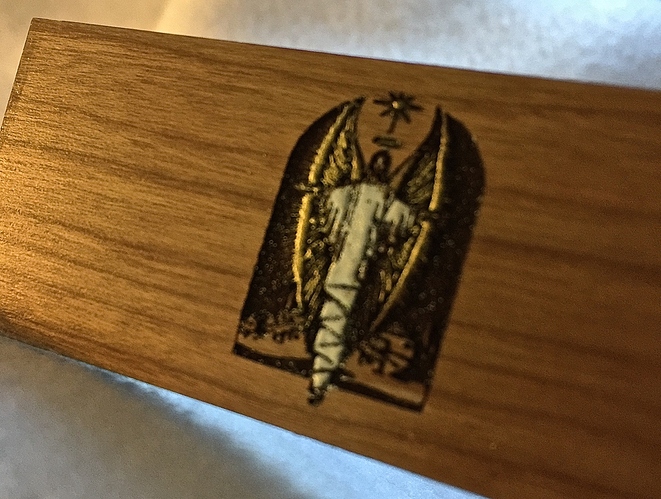 All in all…….it turned out beautifully and was another chapter in my learning book.

That’s fantastic! You did a really great job with that!

Wow…the upgrades you did are fantabulous!!

Oh that looks just wonderful with the clear acrylic and the lighting!

So many wonderful ideas packed into a single project!

I love the extra sparkle from using acrylic - and the light is perfect!

Ohhhhh, gorgeous! You turned a simple design into a fantastic show piece; the lighting idea is perfect!

Neat! I just kept staring at it in wonderment.

OK…here is a humorous addendum…the tale of the farting tree. Before I had even designed the base for the light for this tree, I had ordered a $16 lighted, rotating base. It arrived yesterday. It had SAID it was also a music box, which I didn’t really care about but I did wonder why I hadn’t heard any music. Operator error…there were two switch modes. Anyway, I digress. Plugged the base in…looks very pretty…lights are very pretty too…and even the music box is charming. Then it begins groaning periodically. At first, I laughed it off and made exceptions for it being cheap stuff. Then I became irritated. I took it apart and fiddled with it…and it got worse. Finally, exasperated, I gave it some shots of WD40. Aside from the small noise of the little motor going, it has quit making that noise.

But, taa daaaa…I give you the farting Christmas tree!

OMG…you could market those and sell thousands!!!

The box made the tree wonderful. The music box placed it squarely in my realm - I need one. And for the record, I think smcgathyfay seriously underestimates the market size.

Nice idea about using the under water light!

Keep it “farty”, you’ll sell so many more of them at Bass Pro Shops.

We all know that’s pretty much the truth!! I guess you could only hope that China continues to manufacture stuff that’s below par. If we KNEW every rotating base like this would do that, could be a goldmine!

I’m looking at others…seeing if I can find a less expensive one. They ARE very pretty. Here’s the one I got;