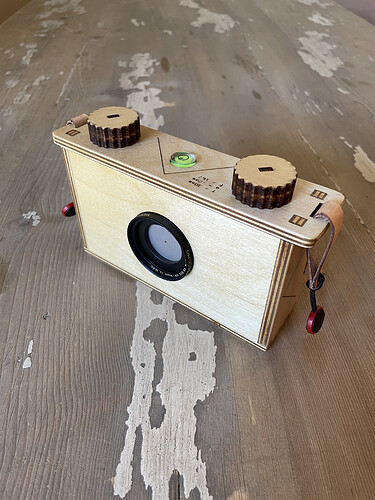 I definitely caught the bug - the pinhole bug! This time, it is a 6x6 format camera. This takes standard 120 roll film which is a fairly easy system to develop since there are no sprockets to make gears for like 35mm film. My last camera, the 4x5 takes sheet film so I only needed to create a light tight box. This time, the challenge was to design a film transport system that includes a window to check the exposure number. For those of you who are not familiar, 120 film has a light proof paper backing with an exposure number printed on it so you can check from a small (usually a deep red) window, how far to advance the film for each frame. I am sure there is a proper wavelength to prevent fogging the film but for this camera, a generic, deep red acrylic would have to do.

For those of you who are interested. All of my designs start with a simple top, front, and side view. In this case it is a box with dimensions of 56mm x 56mm x 30mm. 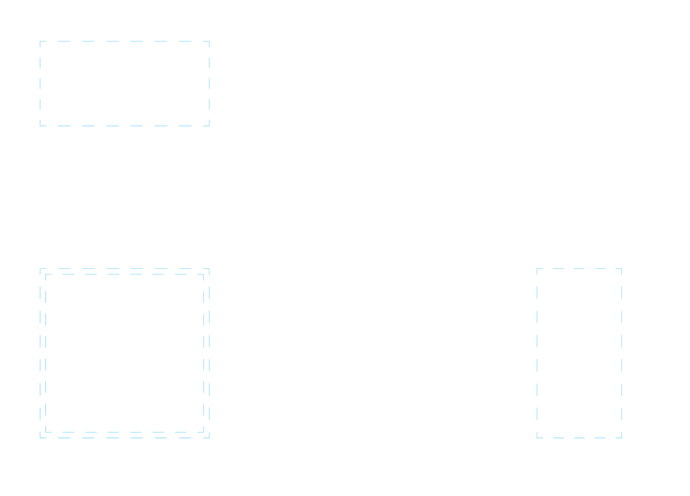 This is because the image size of a 6x6 photo is 56mm x 56mm (allowing for a 2mm border). The 30mm is the focal length (projection distance) for this pinhole which is .2mm. Everything else is built around that box. By the time you start adding layers to create light baffles, structures to support a film transport system, the exposure indicator window, material thickness and so on, you get this: 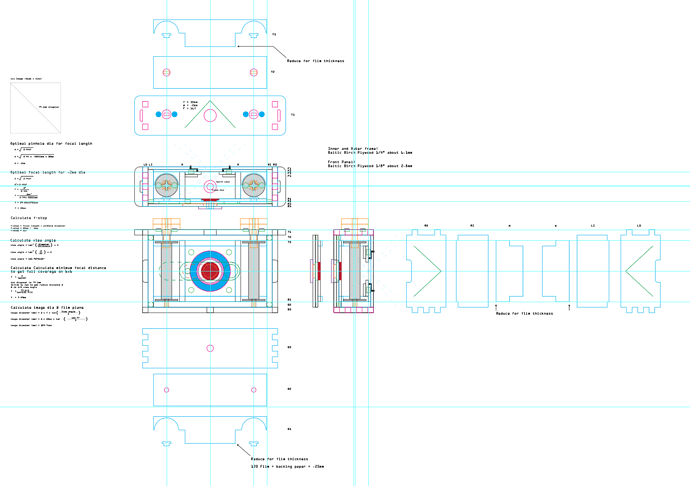 This is only the top and sides. I have the front/back schematics on another layer. Breakdowns of the winder mechanism and exposure window are on yet other layers. You can also see all of my calculations. Thickness of the material I am using is on here as well. It’s different each time so always measure before you design! I use Adobe Illustrator. I have 3D programs but I don’t know why but I prefer this approach. I think it is because we are cutting flat planes to create a volume and not adding materials in space like 3D printers. Whatever works for you. This works for me.

Then comes several tests to get the right speed and power settings to engrave slots and grooves to the precise depth I needed. In particular, the red acrylic window needs a rabbet to fit flush into a plywood layer - I didn’t have to do it that way but I wanted to keep the layers to a minimum. It took some trials but I finally got it right. The same went for the holes to hold the many magnets flush to the wood. 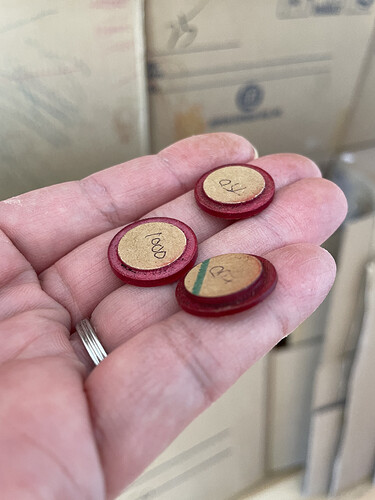 Satisfied I went ahead and cut the parts. I don’t know about you but I get a supreme kick out of laying out all the parts after they come out of the Glowforge. The rest is sanding, fitting, adjusting, and gluing. 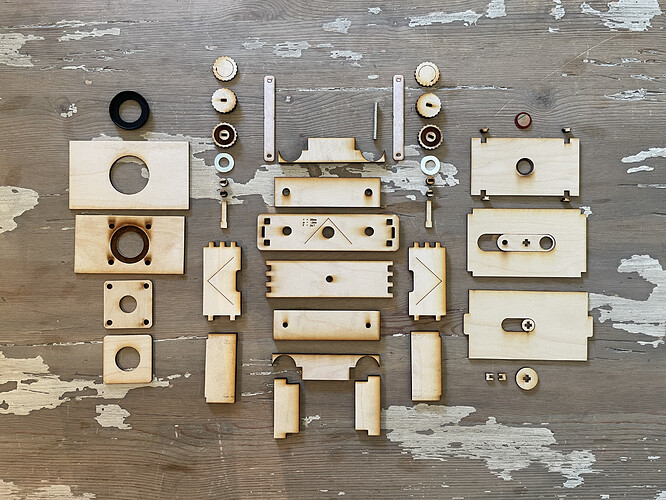 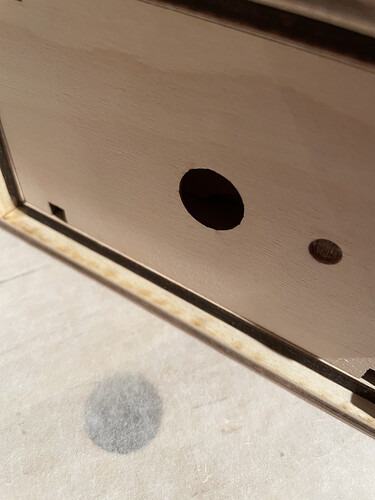 I mentioned magnets. Like the 4x5 camera this one uses magnets in a retaining ring to affix the metal disk with the pinhole to the front of the camera. This time it also uses magnets to hold the back cover to the camera. 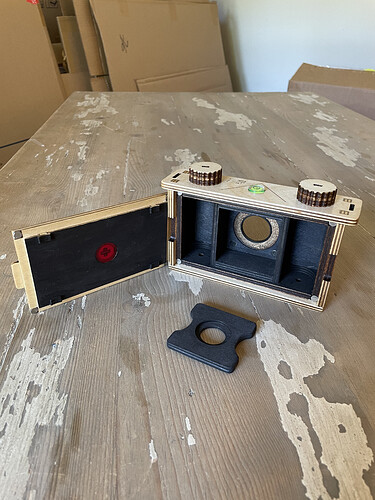 It uses magnets to lock the cover of the exposure window to prevent accidental opening (which could lead to an excess of light entering the camera). It’s hard to see in this photo but the number is perfectly legible in real life. 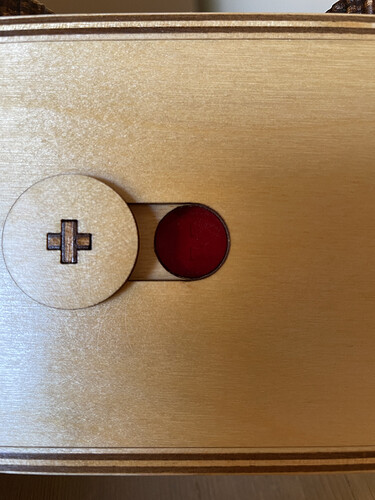 Crucially, magnets are used to hold the film winder knobs to the body. It was important to make the knobs removable because it was the only way to be able to load the film without having to make spring loaded systems that would be too cumbersome for a build like this. Magnets were only used on the camera body and washers were inserted into the winder knobs (engraved channels, of course!). This ensured a constant magnetic force as the knobs were being turned. I would have preferred fender washers but they are often made of an alloy that is barely magnetically susceptible. The standard steel washer was much better for that purpose. 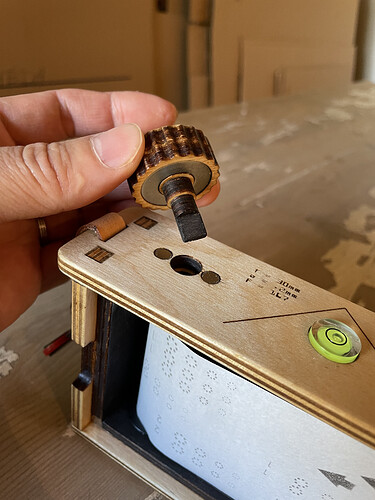 As usual, I finished the plywood with Tru-Oil. I normally use 000 steel wool in between coats but because there are soooo many magnets on this camera, it was a nightmare removing steel wool dust from the magnets after the first coat. I mean, I kinda knew that would happen but it was far worse an issue than I expected. I switched to 650 sand paper and it was fine. I’ll probably use that in the future. Even without the magnets, metal dust just seems to get everywhere on my workshop floor.

I also made some leather tabs so that I could attach Peak Design strap anchors. I suppose I could have attached them directly to the camera but I wanted some stand-off distance between the camera and the metal parts of the strap to keep scratches and dings to a minimum. 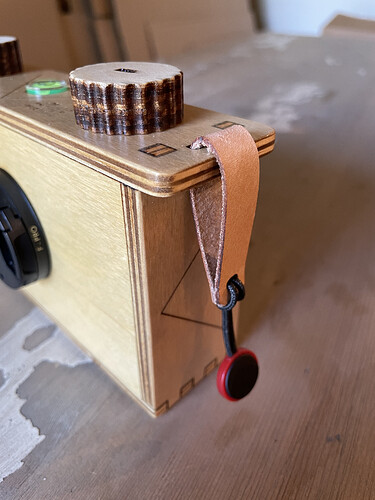 Eagle-eyed viewers will notice that the f-stop number is incorrectly indicated as f-167. How did that happen?! I’m so mad at myself. It should be f-150. I contemplated making a plate to cover it up with the correct info, but it will spoil the look of the top deck of the camera. So I will keep it as is for now until I screw up an exposure due to this number. Don’t think I will, though - I’m pretty upset by it so I won’t forget it. 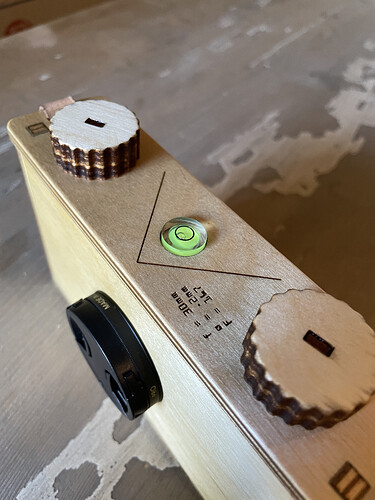 The rest is as my last build: spirit level, filter ring, tripod hole, and guide lines. I didn’t make a shutter like most pinhole camera designers. I am perfectly happy with using the cap on/off method. Maybe I’ll design one for the next build though. Indeed, I originally planned to make a 6x17 panoramic camera but I wanted to nail the film transport system as well as gain familiarity with 120 film before I do something more complicated. I also wanted something portable for an upcoming trip.

I tested a roll and was relieved to see that there were no light leaks! No apparent fogging from the exposure window so I guess the deep red acrylic did the job. 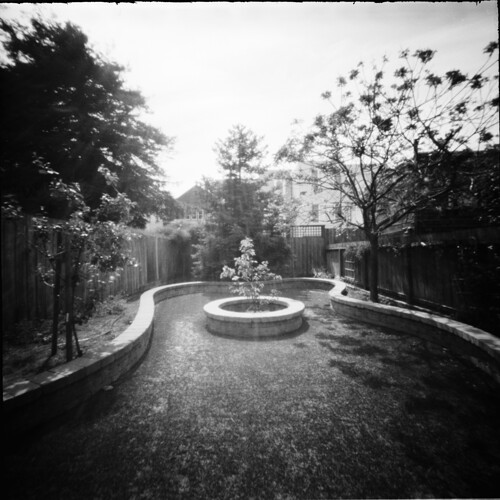 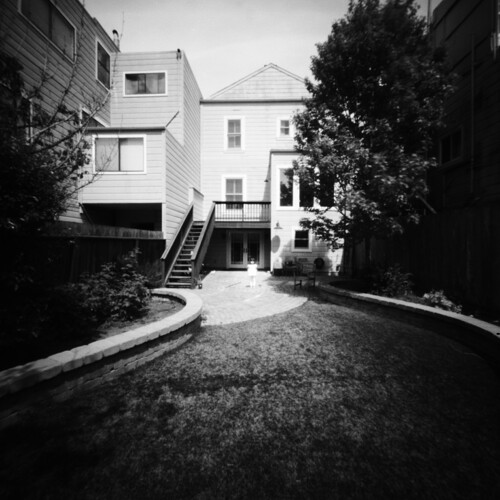 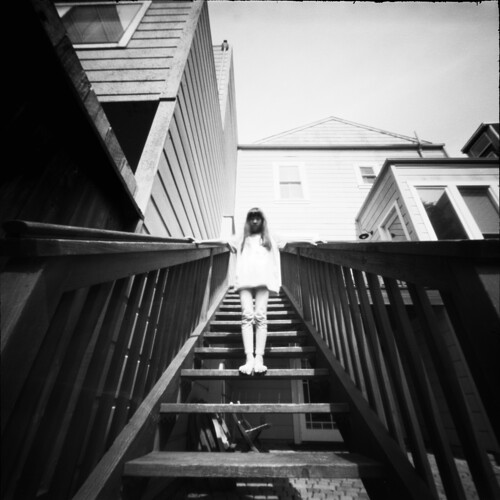 Overall, I have to say I am very happy with this build and I can’t wait to take more pictures with it. I learned a lot from this prototype and will definitely apply it to the next build, perhaps the 6x17 I originally planned, or something even more ambitious. I am worried I am getting too caught up in the process of making cameras and not actually taking photographs so I have to temper myself I suppose, but pinholes are tremendous fun to make.

Beyond impressed doesn’t begin to describe my awe at this! Although way too technical for me, I absolutely love your design and your results!!

Thanks @ellencadwell ! I am still learning. Once I feel like I know what I am talking about, and if I have the time, I’d like to make a camera that anyone cut and assemble. 120 film and 4x5 film is way too specialized as well, so I’d like to come up with a 35mm film camera that is Glowforge community friendly - the 35mm format is the most readily available but presents the greater technical challenge for me, however. But I’ll get there - fingers crossed.

This is terrific. Thank you so much for the great write up explaining your process and sharing how it all comes together. So cool.

Thank you so much for the great write up

Thank you @dklgood ! I know it is well within the TLDR range, but I had a great experience making it so I droned on

You explain things so clearly that it’s a pleasure to read the details of how you make things.

Thank you @kelley1 ! That means so much to me

Dang it, now I want to make one, lol. Very impressive!

now I want to make one

Thanks @robermar36 ! You should! I highly recommend it. There is just something so satisfying about getting an image out of one of these little boxes.

Thank you so much @timjedwards ! I think I’m starting to get a hang of it!

Very impressive once again! This must give you tremendous satisfaction. The photos you have made with this and your other camera are just mesmerising. Bravo!

Wow. You’ve taken it to a new level! Thanks for all the detail.

So this might be a really dumb question but…

Can I just laser a hole in a piece of wood / acrylic and stick it onto my DSLR and get a result?

I’m thinking take the lens off, tape a disc onto the camera, or even lasering a hole into the provided screw on cover.

Can I just laser a hole in a piece of wood / acrylic and stick it onto my DSLR and get a result?

Good question. You “could” - yes, but you likely won’t get coverage on the sensor. The thickness of material is directly responsible for angle of view. Imagine looking through a one inch hole in aluminum foil. Now imagine looking through a one inch hole in one foot of steel. The latter will be a much narrower view angle. Distance from the pinhole to the sensor is also a factor. To understand the relationship between pinhole size and focal distance check out the video link in my earlier post for my 4x5 camera.

If you want a fast result, I suggest you take a camera body cap, make a 1cm-2cm hole and use that as a “holder” and place a .2mm-.3mm pinhole on the back side of the body cap. Distance from the pinhole to the sensor will give you your f-stop. You can make a .3mm pinhole without too much trouble by punching a needle in brass shim (the thinner the better). Don’t need to penetrate the shim - sand it down from the other side until you expose a hole. Smoothness of the hole will give you the best results. If you want to measure the pinhole size you can scan it at a known dpi and then count the pixels across the diameter in Photoshop. Or, you can buy an accurate pinhole from any optical supply store. They’re about 10 bucks. Don’t get too caught up on those numbers, they’re just a ballpark, but on the other hand you can get fairly loosey-goosey and still get an interesting result.

I am so impressed with your technical skills in creating these cameras - you do a great job of explaining the build process too. It’s just amazing the things people create with their GFs!

Truly AMAZING!!! Your photos came out like something from horror movie ha?! No, but the work and design is truly genius. An inspiration for all those who are new and beginning.