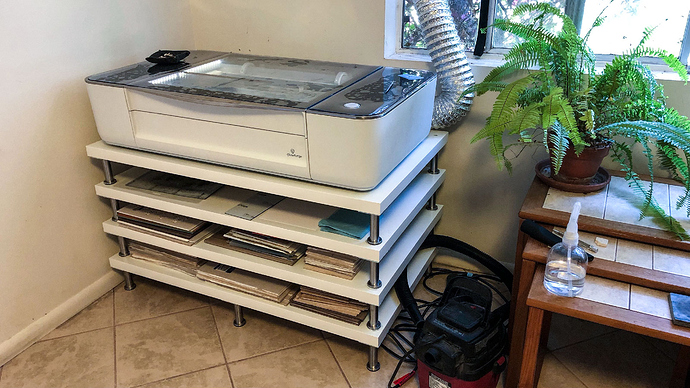 In the interest of improving accuracy and my working experience, I decided to upgrade my Glowforge table over a recent weekend. As absolutely no one will remember, I originally put my Glowforge on a low dolly that could roll under my high work table. Since it is in almost daily use and we are still waiting on the GF air filters, it has mostly just remained sitting in the middle of the studio floor so that it can vent out the window.

I also ran into issues with the machine shaking itself on certain kinds of cuts, especially those with spiral movements and, having that mess up the cut.

So, I came up with a plan to move some things around to free up a spot by the window for a sturdier table that incorporates a little storage.

This Ikea hack from Jonathan Fong is something I’ve seen a bunch of other people post about and, it looked like a good option.

I made my table only four layers so that it would still be at a reasonable height when the air filter eventually gets added. It’s still at a great height for use now and, has added three extra layers of flat storage, which has been at a premium since the new machine arrived.

The shelf panels seem to be hollow core except for the mount points for the legs at the four corners. I noticed while adding the extra set of center legs to the lower tier that the screws were really not going into anything particularly solid. I think they will still help support the weight some, though.

Ikea no longer has the longer legs that Jonathan Fong used for his table but, I didn’t particularly want that extra height anyway.

This was a great upgrade. It was about $110 USD in parts and, took a couple hours to build. It freed up a lot of floor space as well as providing some much more efficient flat materials storage. It’s also a lot more solid than my original wheeled dolly.

I also did a quick build video, mostly for practice making videos:

Love the IKEA hack. They are terrible about discontinuing things, so anybody who’s on the fence about this might want to pick up the parts. It’s cheap and sturdy!

While I agree about the discontinued parts, one of the nice things about this hack is that it works with a range of parts that IKEA always carries… table tops and legs. Might not be exactly the same, but it will be close.