I have a Nixie tube clock, unfortunately the tubes sometimes fail and though the board has sockets for the IN-14 legs, the legs are quite often slightly bent or just angled incorrectly making it hard to insert the tube. 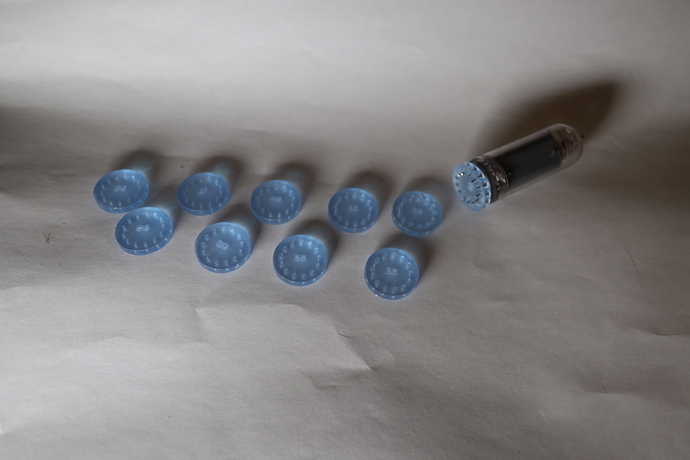 I created these in Fusion360, exported the layer as a DXF, then used a web DXF->SVG, then opened in Affinity Designer and added the text and ensured the outer cut was exactly 18.5mm.

Nice result. I am sure many would agree that it would be great to go directly from Fusion 360 to the Glowforge.

Maybe it was this?

New Workflow from Fusion 360 to Glowforge Beyond the Manual

Glowforgers, For all of you out there designing parts in Fusion 360 for your Glowforge, there is a new workflow that I think you will like. It will allow you to go straight from Fusion 360 to your Glowforge and even takes kerf compensation into account. There was a previous conversation about this topic here: Fusion360 to Glowforge in case you want to read up. I am creating a new post here in order to give the new workflow better visibility on the forum. The workflow is made possible by @gar…

Fusion360 Plugin to Create SVGs Very Easily Everything Else

For those of you who use F360 to make your designs and are looking for a fast way to get your 3d models into something the GlowForge understands here’s a tip. Download a plugin called Shaper Utilities (here). Install the plugin, remember you’ll need to restart F360 if it’s open during the install. Then create your design as you would, say a box. Once you have your design complete, click on the face you want to use to generate your outline then select the Shaper app. The app will then create…

You can by exporting a PDF from F360.

That was my thought. I have used PDF from their Slicer…

I go straight from Fusion 360 to my glowforge all the time.

I don’t think I’ve ever seen sockets for IN-14s. On my clock they are just soldered in place, which is fairly painless to do.

Not sure what this is in response to.

The IN-14 is designed for solder-in-place, the IN-8 is the equivalent for socket mount.

They were originally supplied with spacers similar to what the OP has made here, but most available today come without them. They did appear to mis-use the word “socket” to describe the board holes.

Yes, I’m aware it’s solder in place. OP said that he was inserting the IN-14 into sockets. As he said, these are not to replace the original spacers (which my case of IN-14s had), but to straighten the legs for insertion with decreasing hole size.

I will add, that if you need to insert the IN-14s for soldering, there is a really easy method. It’s to start at one of the leads and start trimming each one in succession as you work your way around them. You’ll end up with a vertical spiral of leads so you can insert the longest one first, followed by the next one, etc. Super quick and easy.