I have my childhood Apple IIe sitting in my office at work. It is a reminder to me, and anyone who asks about this ancient device, how far we’ve come with computer technology and where I started. I have a 5 1/4 floppy that still runs the Print Shop. The graphics are so awful, but at the time, being able to print a banner on a dot matrix printer was awesome! The CRT monitor was a bit fuzzy, and a guy at work took it and replaced a bunch of internal parts, and now it’s crisp and like new. I credit my love of technology and being able to use cool things like the

to the countless hours sitting behind this device as a kid in the early 80’s, so I thought I would share.

Anyone else still have their old tech? 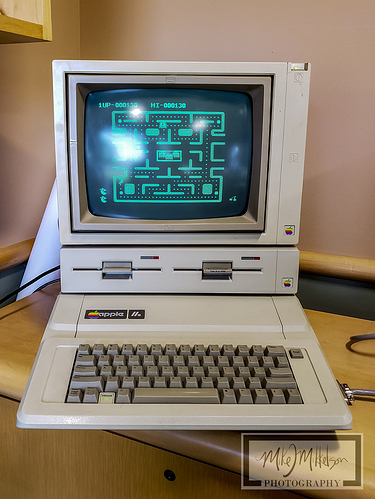 I wish. I miss my apple IIc keyboard, after all this time.

BTW, if you have a joystick and can find it, Airheart is a great apple II game.

Karateka is undeniably the superior game. 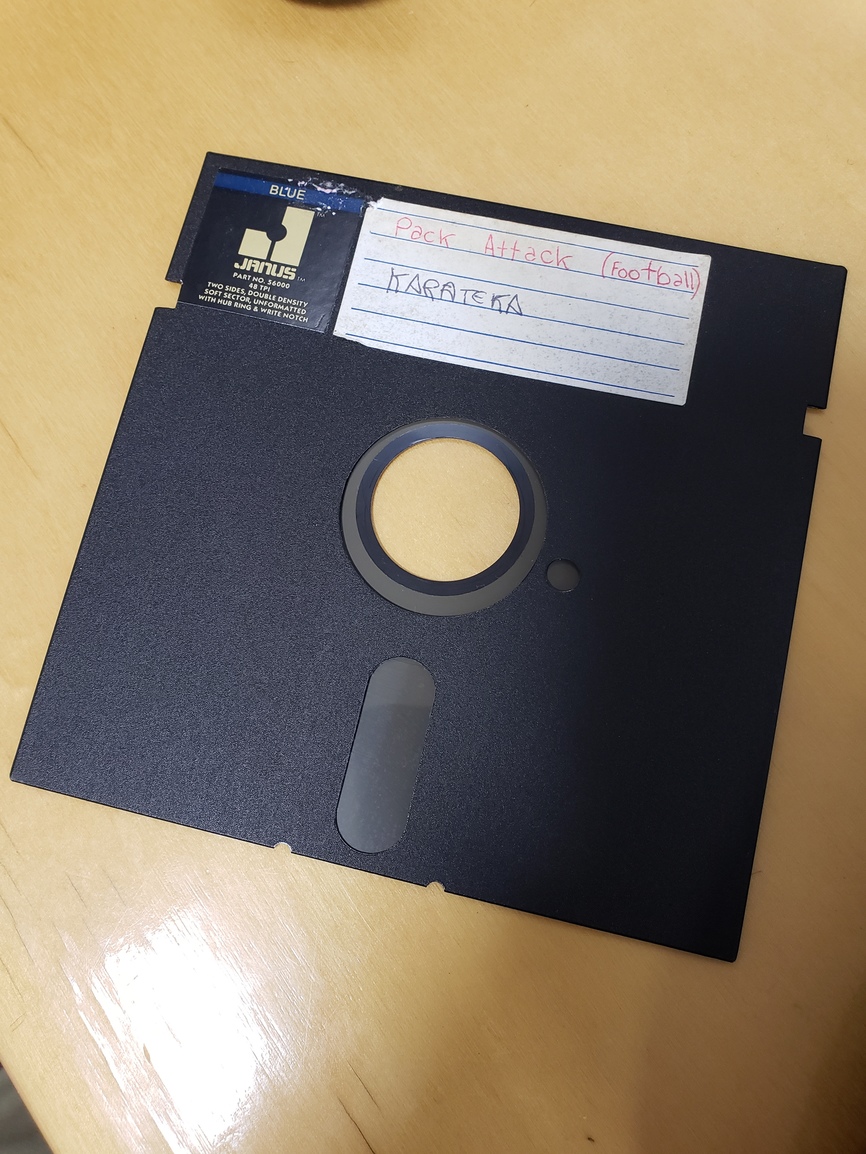 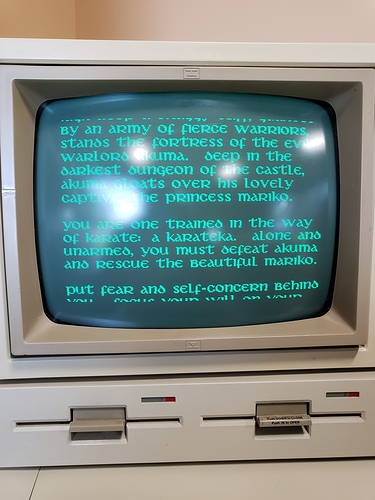 Break out the Fanta and Jiffy-Pop. I’m coming over.

But how do you get the CD out of that to play the music?

I have an NES that we got when I was in first grade. I made my niece and nephews play with me a few years ago. The games are classic, right? Who isn’t going to love Super Mario Bros 3?

Those little savages. The 4 year old kept trying to touch-screen our television and swipe right to download more games, the 8 year old tripped over the cords at least 3 times, and the 10 year old asked when we could stop playing.

I promptly disowned them.

Just kidding. I destroyed them in mario kart. That’ll teach them.

My 11 year old son loves hooking up my old Apple IIc to the TV and working through those old programming books where you spend 3 hours typing in a BASIC program to play tic-tac-toe or whatever. Those pixels are huge on a 50" TV! I’ve still got the little 9" (?) green screen, too.

I’ve also got a II+, but with the separate drives that’s more work to haul out and set up. A TI-99/4A and “Hunt the Wumpus” cartridge gets occasional use. There’s also a NeXTstation that needs to be fixed up.

Thanks for triggering the nostalgia; now I’m going to have to play “Seven Cities of Gold” and get nothing else done all day.

Not apple II, but mac…

I wish someone would make a good port of bandit kings of ancient china to modern systems.

Or a faithful update of the mac version of Heaven and Earth. The web attempt was doomed and incomplete, the card game for ipad wasn’t well executed, and the pc version… we can’t even talk about that.

I tried that version a while back and the performance… not great. Maybe I’ll see if the emulator has gotten better.

We were an Apple house. Started with a II+ then IIe with a hard drive from applied engeneering. Then the IIc and on to the LC2 and on up through the evolution of the iMacs. Those were the days

My two heavily modified PCjrs are in my parents’ attic in Texas. I just haven’t figured out how to get them from there to WA so I can see whether they still work.

I had a bunch of original iMacs that I turned into terminals for a Linux Terminal Server school setup. It was pretty fun watching Fedora Linux boot up on the monitors. It took some fiddling with configuration settings for the sound and monitors to work right. I’ve seen many older Apple computers stuffed into closets in schools through the years and wish I would have kept a few.

I was imprinted on PCs running DOS so I never do get quite shiver of recognition when I see old Apple products.

I have two boxes of 5.25" floppies with the cellophane on them.

I also have my Osborne 1 computer

The TRS-80 Model 1 and Sinclair are both long gone but, I still have a TRS-80 Pocket Computer, SX-64 ( the Commodore 64 “portable”), Commodore 64 and, an original edition Bondi Blue iMac.

Still have a nice collection of software for all of those … assuming the media hasn’t degraded. I’m pretty sure the Gateway to Apshai cartridge is still good, if nothing else.

If I ever set up a large enough office, I figure those would all make great display pieces, along with the working railroad telegraph system from my Grandfather.

Have you seen the two-player hacked version? 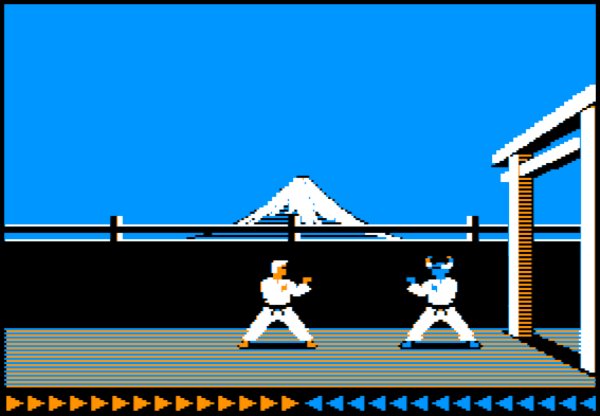 I just recently set up my old Apple IIGS again. I was pleasantly surprised that the old 270 MB SCSI hard drive still works, although I’m backing it up to a 1 GB SD card as I type this. (I got the SCSI2SD (v5.1) so I can use an SD card as a hard drive.)

The AppleColor RGB Monitor also still works (these old CRTs often don’t) but I’m looking forward to the release of the VidHD card so I can get an HDMI port and use a proper 1080p LCD.

The clock battery was dead, but thankfully it hadn’t leaked so I just pulled it out and I ordered a new one off Amazon.

I’m using a FloppyEmu in place of floppy disks, but at some point I should work on getting the original 3.5" and 5.25" drives working again. (The eject mechanism in the 3.5" drive needs a gear replaced and the 5.25" drive needs its speed adjusted.)

While I still have some working ADB mice and keyboards, input devices have come a long way in the last 30 years. So I use a ADB-USB Wombat to hook up a modern keyboard and mouse. Ok, so if I still had my Apple Extended Keyboard II then I might use it, but I don’t, and pretty much any USB keyboard is better than the few ADB keyboards I still have. And as far as I know nobody ever made a decent ADB mouse.

So far the original power supply is working fine, but I may need to replace some capacitors at some point. And perhaps replace the power supply entirely with a beefier one; with a 10 MHz ZipGSX and an Apple II High-Speed SCSI card and the VidHD card (once it’s released) I may end up pushing that power supply harder than it can handle. 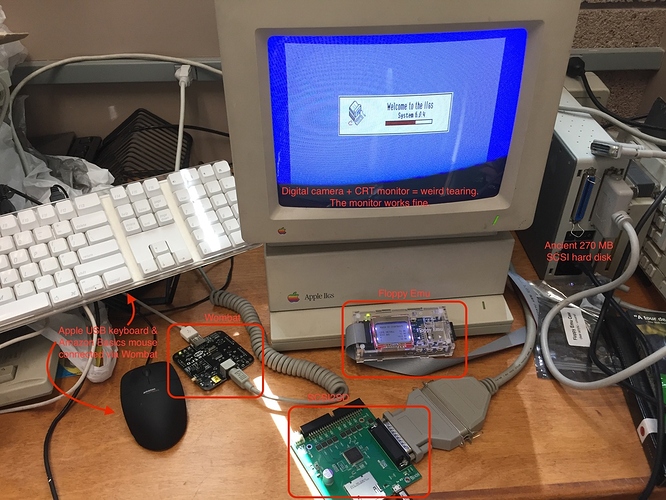 Anyway, I need to use my Glowforge to make proper enclosures for the Wombat and the SCSI2SD. The FloppyEmu came with a nice laser-cut acrylic case but I might also make a new one for that, too.