Not Able to Engrave: Head Problem?

I began an photo engrave today after a successful one yesterday. The head began bouncing at every sweep (left sweep, bump, bump, right sweep, bump, bump, left sweep, bump, bump, etc.), which I had not seen or heard. I could not recognize what was printing. I stopped the print and cleaned the side lens on the head and tried again. Bump, bump, again. Then, all of a sudden, the side lens fell out. I stopped the print, cleaned the lens, and screwed it back in. This time I shrunk the print to something small. The bumping still occurred and the print started and began to skew. What should have been rectangular shape was not shaping up to be a rhombus slated right. Anyone have a clue? By the way, it cuts fine (see image below). All lenses have now been checked and cleaned (bottom did not need it). 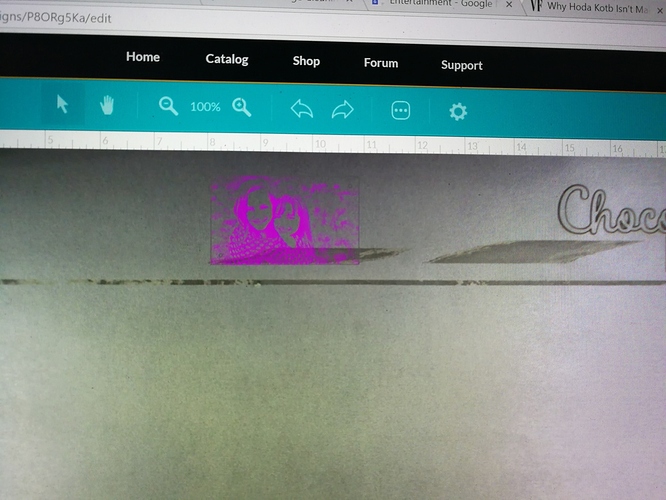 Is the head bumping into something like the side or is it bumping in place? Did you take the head off, reseat the connector and put it back in? Did you check the flat ribbon cable does not bind up when traveling across the machine (with power off gently slide the head from one side to the other and back while watching what’s happening to the ribbon cable, do it with the head in the back of the machine as well as the front). Also check the toothed belt, pulleys and rail do not have anything obstructing them - bits of material or something.

It’s bumping in place. I’ve checked all that you said. I’ve got to go to bed now. I will come back to it tomorrow morning.

Thank you for responding. I appreciate your help.

Tomorrow before you turn it on, move the head to the center and under the camera and then turn it on. That will reset its calibration in the event you bumped it post-calibration so it lost its knowledge of exactly where the head was.

See this guy’s thread. It’s the exact same thing. I’m about to try an SVG that I used successfully in the past. I’ll update.

OK, went to use my Glowforge on a project I have been working on since the weekend. I’ve done four successful cuts of this and had one more tweak I was trying, and then disaster. I started it up and went to work on another project while it engraved behind me (55 minutes). I kinda noticed it sounded weird (a kind of bounce at each end of each engrave line) so after about 30 minutes I went to check on it. The engrave was ALL SORTS of messed up. I started it over again and early in the print I no…

Turns out is was a bad SVG, just like the person before me. Go figure. Thanks for checking in and helping. This post can be closed.

I’m glad you resolved it! I’m going to close this thread - if the problem reoccurs, go ahead and post a new topic. Thanks for letting us know about this!